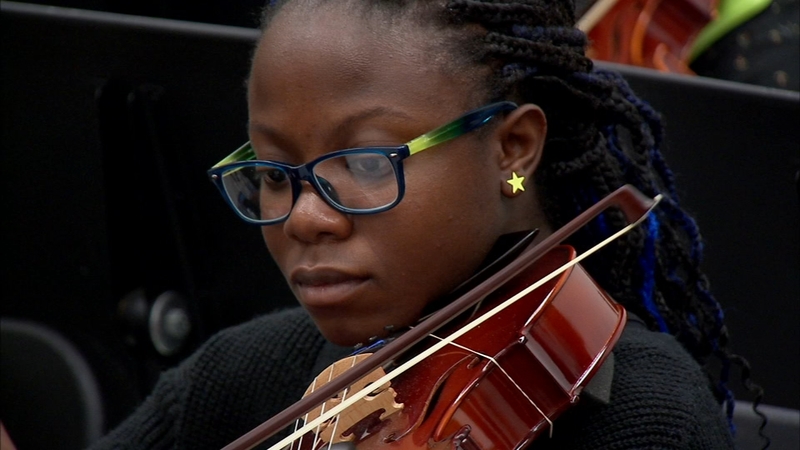 CHICAGO (WLS) -- A conductor has started a youth orchestra on Chicago's South Side to serve many young musicians of color who had to commute long distances to take part in music programs downtown or in the city's northern suburbs.

The youth orchestra rehearses weekly and they held their first performance in August.

Ten years ago, Dickerson started the Inner City Youth of Orchestra in Los Angeles after realizing young musicians of color had no orchestras in their community.

"We started our own orchestra right in the inner city of Los Angeles, and now it's the largest primarily African American orchestra in the country," Dickerson said.

"These young people wanted to play, and in order to play, they had to go far and wide," Dickerson said.

The South Side Chicago Youth Orchestra has been rehearsing at Chicago State University on the city's South Side, according to Dickerson.

Cellist Sajdah Muhammad said she has to travel long distances to the Loop or to Evanston to play in orchestras.

"But this one is pretty close to home," Muhammad said.

Dickerson is also making a special visit to Kenwood Academy in Hyde Park, where some students are part of the orchestra.

"In most orchestras, you'll see that everybody is pretty much on the same advanced level. But in this orchestra, we get to help each other, talk to each other," said Nicholas Thomas, who plays the violin.

"There's a national discussion about some of the cultural problems that are happening within the African American community here," Dickerson said. "So we thought that this might be a good place to try to bring something that has proven itself to be successful in Los Angeles."

The goal of the South Side Chicago Youth Orchestra is to eventually fill more chairs in orchestras across the country with musicians and conductors of color.

"Less than 5% of the orchestra industry has employees who are African American or Latino," Dickerson said. "So the numbers are terrible and they're even worse when they come to conducting."

"I'm a black, Muslim woman cellist so that adds a lot more," Muhammad said. "I haven't seen a lot of people just like me."

Dickerson also hopes to bring beauty to the community.