Woman killed in South Side chase, crash was picking up granddaughter from daycare, husband says 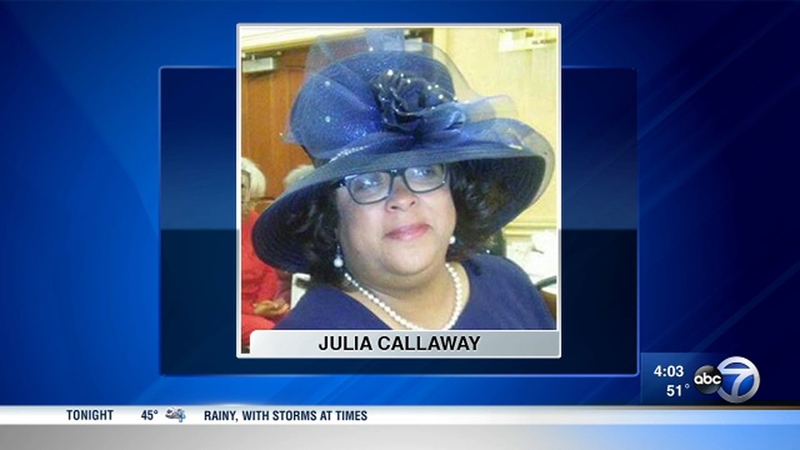 Woman killed in South Side chase, crash was picking up granddaughter, husband says

CHICAGO (WLS) -- A woman killed Thursday on Chicago's South Side was walking to pick up her 2-year-old granddaughter from day care when a speeding car slammed into her and took off.

The victim was identified Friday morning to the Cook County Medical Examiner's Office as Julia Callaway, 55.

Callaway's husband, David Brown, said he drove past the scene before he knew his wife had been killed in the crash. They live blocks from the intersection of West 79th Street and South Lafayette Avenue, just off the Dan Ryan Expressway.

He said Callaway was crossing Lafayette when she was hit by a car being chased by Chicago police. She died almost instantly.

"This is not real. No way. Not my wife," said Brown, a minister. "I get a phone call from the day care when I'm here and they're saying that my granddaughter never got picked up."

Investigators say the pursuit began after a gray Nissan sedan with three people inside fled from a traffic stop near West 81st Street and South Evans Avenue. Surveillance video shows the gray Nissan sedan speeding past and running down two pedestrians as it flew through the intersection at 79th and Lafayette.

According to officers' radios, cops followed the car onto 79th and Cottage Grove where they told a police dispatcher they had given up the chase.

At the scene, authorities said they were continuing to investigate the circumstances surrounding the pursuit. "Another unit in the area fled from that unit as well,' said Chicago Police Department Sergeant Rocco Alioto, "...the vehicle entered the southbound Dan Ryan."

Only to exit at 79th and Lafayette.

The video shows Callaway was thrown about 50 feet into the air. Witnesses ran to help her after she landed face down. Brown said her heart stopped, and she was gone.

When he arrived at the scene, Brown found his wife's glasses not far from where she died.

Brown said he can't believe what happened. He said he's truly leaning on his faith to get him through this.

"I was angry at first, but being a man of God, my spirit is humbling me to not be angry. I can't be angry, because this could really destroy me," Brown said.

Callaway is survived by her husband, two daughters and her beloved granddaughter.

Callaway wasn't the only person hit. A 30-year-old man was also struck by the speeding Nissan. He was treated at the scene.

Charges are pending against three people who were taken into custody Thursday after a crash killed a woman on Chicago's South Side.

Police said after the crash, the Nissan kept going, hitting an Uber and an SUV. The two men and a woman in the Nissan jumped out and tried to run from police, but officers caught up with them. They are now in police custody. Charges are pending.