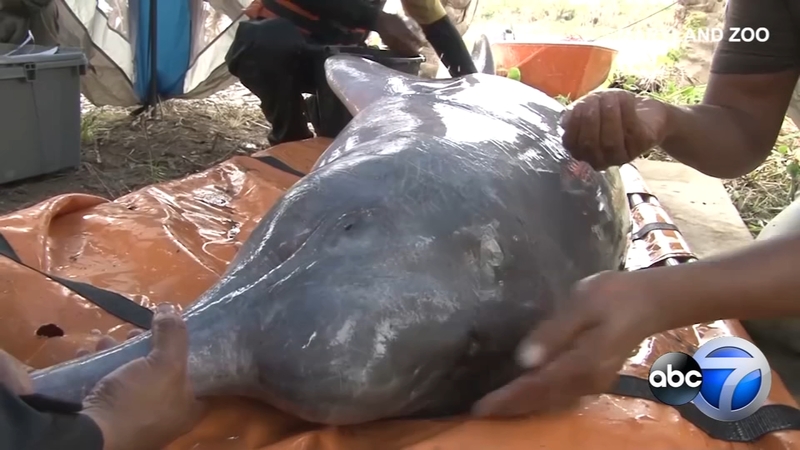 The Shedd's Animal Response Team and the other groups traveled nearly 4,000 miles to central Bolivia, where they performed first-ever medical exams on the animals, created invaluable data benchmarks on their health and attached satellite tags to a select few, aquarium officials said.

The dolphins, also known as bufeos, have been trapped in a shrinking remote lake in Bolivia.

"This species is endemic to Bolivia," said Dr. Ellen Bronson, senior director of animal health, conservation, and research at The Maryland Zoo. "They face many threats in the wild mostly due to the conversion of forest into soybean fields, which leads to erosion of dirt into rivers, along with potential contaminants and diseases. They are very secretive, and little is known about their biology and health, including how these environmental changes affect their survival."

Funded by a grant from the American Association of Zoo Veterinarians' Wild Animal Health Fund, the groups were able to purchase medical supplies and custom-built fishing nets to aid their efforts.

"The six dolphins, one female and five males, including one juvenile, were in surprisingly good condition and overall appeared healthy on examination and on initial laboratory testing," Bronson said. "Having the opportunity to work hands-on with this amazing species and contribute to its conservation was a very gratifying and humbling experience."

"This dolphin rescue and translocation project is an example of the positive impact that zoos and aquariums accredited by the Association of Zoos and Aquariums (AZA) can have by working to ensure the health and conservation of endangered species, whether the species are living in world-class AZA zoos and aquariums or are in the wild living in habitats that are rapidly being modified by the growing human footprint," said Sharon Deem, director of the Saint Louis Zoo Institute for Conservation Medicine. "We hope to continue our collaboration in the near future on behalf of the river dolphins in Bolivia."