Plane slides off runway at O'Hare Airport during snowstorm 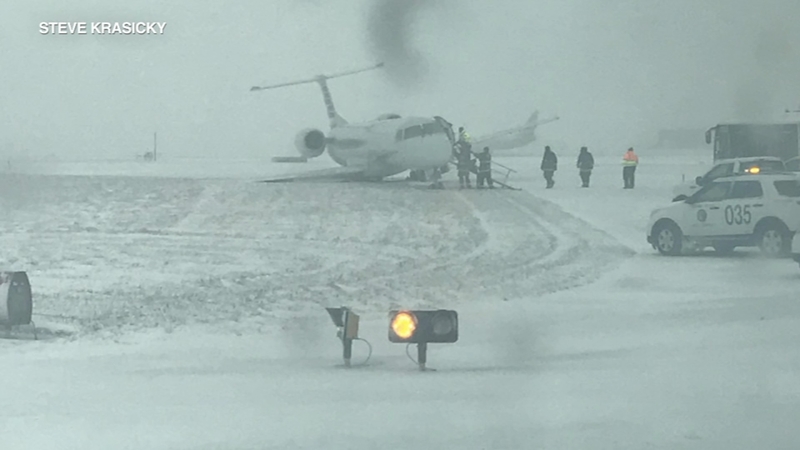 Plane slides off runway at O'Hare Airport during snowstorm

CHICAGO (WLS) -- A plane slid off a runway as it was landing at O'Hare Airport as snow fell on the Chicago area Monday morning.

A Chicago Aviation spokesperson said the incident occurred at about 7:45 a.m. as American Eagle flight 4125 from Greensboro, North Carolina was landing at O'Hare.

A plane slid off the runway while landing in snowy conditions at Chicago's O'Hare Airport Monday morning.

According to an American Airlines spokesperson, "After landing, American Eagle flight 4125, operated by Envoy Air, slid off the runway due to icy conditions at Chicago O'Hare. No injuries were reported. All 38 passengers and three crew members were removed from the aircraft and are now safely back in the terminal."

BREAKING: @AmericanAir Flight AA4125 from @flyfrompti to @fly2ohare slides off runway in Chicago this morning. Passengers tell me everyone is OK, deplaned and on buses to terminal. Video: Joseph Lian from Greensboro. @ABC11_WTVD @ABC #ABC11 pic.twitter.com/rBwyqfVtiU

Cell phone video taken by a passenger inside the plane and it appears as if one its wings tipped sideways, skimming the snow and the pavement. Passengers could be heard as the plane veered off its path.

The FAA issued a statement saying, "At approximately 7:45 am this morning, an Embraer 145 regional jet arriving from Greensboro, NC, landed at Chicago O'Hare International Airport on Runway 10 Left and slid off the runway while attempting to exit at Taxiway P4. The aircraft's right main landing gear collapsed. Passengers deplaned via air stairs and were placed on a bus to the terminal. No injuries were reported. The FAA will investigate."

A few passengers from the flight said that the visibility was bad and there were a few attempts to land and one felt like they should have landed at a safer airport.

"That was our second landing attempt," said passenger Shaun Steele. "The first one, we went back up after we noticed conditions were bad. We made a loop for about 20 minutes... As soon as we landed, we could start feeling something a little off there and we tried to do a little turn and that's when we started going sideways."

"The pilot started zigzagging the plane to try to stop it and still there was no grip on the ground," said passenger Luis Torres Curet.

The Aviation spokesperson said the incident had a moderate effect on flight operations at the airport.