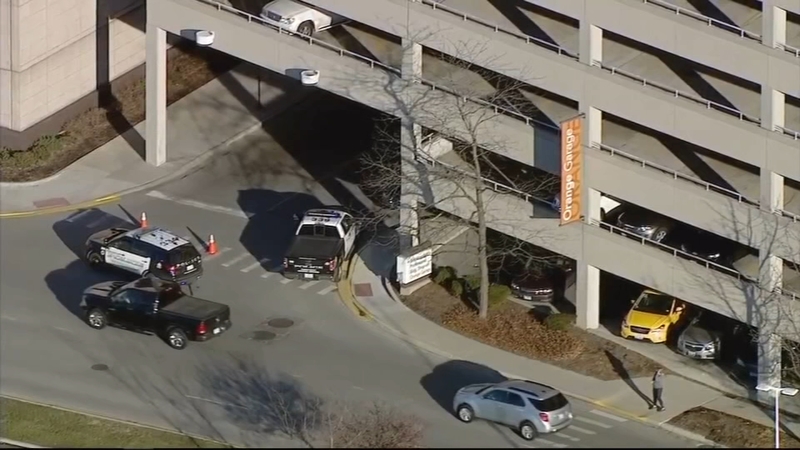 Carjackings in Chicago's suburbs have police on alert

SKOKIE, Ill. (WLS) -- A pair of carjackings this week in Chicago's suburbs have police on alert.

The latest incident occurred Tuesday. Police are still looking for five suspects at the center of a crime spree that began with a stolen car in west suburban Elmhurst and then a retail theft at Old Orchard Mall in north suburban Skokie.

It was there the suspects stole another car at gunpoint from a 13-year-old student and her mother in the Niles North High School parking lot, fled, then crashed the second vehicle and set it on fire.

Police said just before 1 p.m. they were alerted to a retail theft at the Nordstrom in Old Orchard Center. Witnesses told police they saw five males running out of the store carrying purses.

Police said those suspects got into a stolen silver Audi and tried to flee, but crashed into another vehicle on the west side of the mall.

Elmhurst police said the silver Audi had been stolen from the 800-block of North Addison Street. Police said the keys had been left in the ignition, and the owner left a loaded .380 caliber handgun in the car.

Police said the suspects abandoned the Audi and at least one ran to the parking lot of Niles North High School where they stole a Jeep at gunpoint.

"I just thought, is this real? Is this actually happening? Why did this happen to us?" said the 13-year-old girl inside the car. ABC7 Eyewitness News is protecting her identity.

The girl spoke to ABC7 with her parents about the encounter that left her shaken.

"He came up to my mom and started pulling her out of the car, telling her to get out and leave everything. He was pointing a gun at her head," the girl said.

The girl and her mother had just left a meeting when they were met by the gunman.

Police described that suspect as a black male, over 6 feet tall, with a thin build and who was bald and wearing a black coat. Police did not release descriptions of any of the other suspects.

The stolen Jeep then picked up the rest of the suspects before fleeing southbound on Interstate 94. Police found the car in a parking lot near Cicero Avenue and Peterson Avenue in Chicago, abandoned and apparently set on fire.

Destroyed in the backseat were the girl's book bag full of school supplies and the computer she uses for class.

"He took everything that we had and just burned it all," she said. "The only good thing is that he let me go and didn't just kill me right there."

An investigation involving police from at least three departments is ongoing. If you have any information about the incident, or if you were a witness it, contact Skokie police at 847-982-5900.

The carjacking is at least the second this week to occur in Chicago's suburbs. Police in south suburban Matteson are still looking for two teenage suspects wanted in connection with a carjacking on Monday morning.

The victim, a 22-year-old mother, said one of three teens got into the back seat and another opened the driver's side door and threatened her with a gun. Investigators said suspects pistol-whipped the woman and took her car, wallet and phone.

The attackers then went on a high-speed joyride, leading police on a chase that ended in a crash in the area of 153rd Street and Hilltop Drive, nearly 18 miles away in Orland Park.
Report a correction or typo
Related topics:
skokiemattesonelmhurstorland parktheftstolen carcarjacking
Copyright © 2021 WLS-TV. All Rights Reserved.
More Videos
From CNN Newsource affiliates
TOP STORIES