Mayor Lightfoot says Chicago FOP vote of no confidence is 'badge of honor'
WLS
By Will Jones, Craig Wall and Liz Nagy 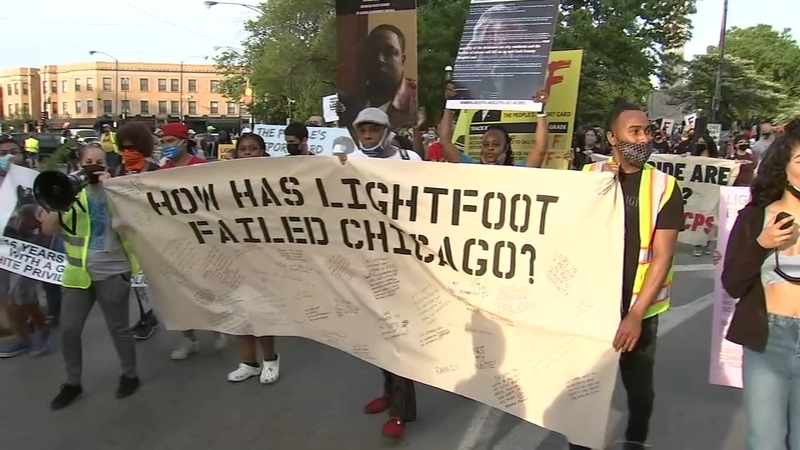 CHICAGO (WLS) -- Over the past year Mayor Lightfoot has had to contend with the pandemic, civil unrest and rising crime. Halfway through her term, she's getting mixed reviews.

"She is doing her best under extraordinary challenging times and difficult circumstances," said Sylvia Puente, the president and CEO of the Latino Policy Forum.

Puente hopes Lightfoot does more to help neighborhoods struggling to recover from the economic toll of the pandemic.

Community groups reflected on the first two years of the Lightfoot administration, mostly with disappointment.

"Midway through her tenure there's still a lot to do and there's a lot to do, to really rebuild and invest equitably in our communities." she said.

But others are not so charitable.

"Chicagoans are living in a nightmare with Lori Lightfoot as our mayor," said Jasmine Salas, protester.

"We are here to deliver Lori Lightfoot her report card that says she has failed us in every possible way," said Oscar Gonzalez, protester.

Over 40 community groups, including the Chicago Teachers Union, gave the mayor a failing grade.

The Chcago Fraternal Order of Police gave Mayor Lori Lightfoot Thursdayt, which she dismissed and called a badge of honor.

"Coalitions are doing the community work, getting the input, doing the research, presenting it, and then the mayor instead of trying to take that and work with people, to have progress, she's actively stopping it and blocking it," said Dixon Romeo, with United Working Families.

Rod Wilson is the executive director of the Lugenia Burns Hope Center, an organization aimed at increasing civic engagement in the Bronzeville neighborhood.

"She ran off saying she wanted to do somethings and she hasn't gotten them done," he said.

Wilson cited Lightfoot's handling of police reform, specifically the city not meeting the deadlines of the consent decree and her stance on community oversight of the police.

"We thought we were going to get something different, but instead we are getting more of the same," he said.

Asiaha Butler, the executive director of the Resident Association of Greater Englewood, was a member of Lightfoot's transition team's good governance committee. Butler said she and others on the committee have been disappointed by the mayor.

"It has been the gamut around COVID. It was around civil unrest. It's been around the roll out of INVEST South/West," said Butler, referencing the mayor's program bringing resources to 10 neighborhoods on the South and West Sides.

Lightfoot took the criticism in stride.

She noted her push for progress on many fronts has been impacted by the pandemic and the economic meltdown that followed.

"I can say that I'm proud of the progress that we've made and excited to continue the hard work to roll up our sleeves and get things done on behalf of the residents of this city," Lightfoot said.

And some residents are ready to see what the rest of her term has to offer.

"Give her a chance. See what's she's going to do. See how much money she's going to put in our neighborhoods and then we're working with something," said Linda Hardison, a resident of Auburn Gresham.

The Fraternal Order of Police, which represents rank and file Chicago police officers, issued a vote of no confidence for both the mayor and the Superintendent David Brown. The FOP is frustrated by many things, including 12 hour shifts and having days off cancelled, and the St. Jude's parade being cancelled for the second year in a row.

"We are speaking on behalf of our membership, who are fed up with being treated like rented mules, and just the ability to have a social life, the ability to be fathers and mothers and spouses, friends, family members to others," said John Catanzara, FOP President.

"We're not going to be distracted on protecting the people of Chicago, reforming this department, and ensuring that we're using all of our energy towards reducing violence," said Brown.

The mayor was even more dismissive.

"Frankly, getting a vote of no confidence from that guy is a, is a badge of honor," Lightfoot said.

The FOP had previously given votes of no confidence to superintendents Eddie Johnson and Jody Weis.