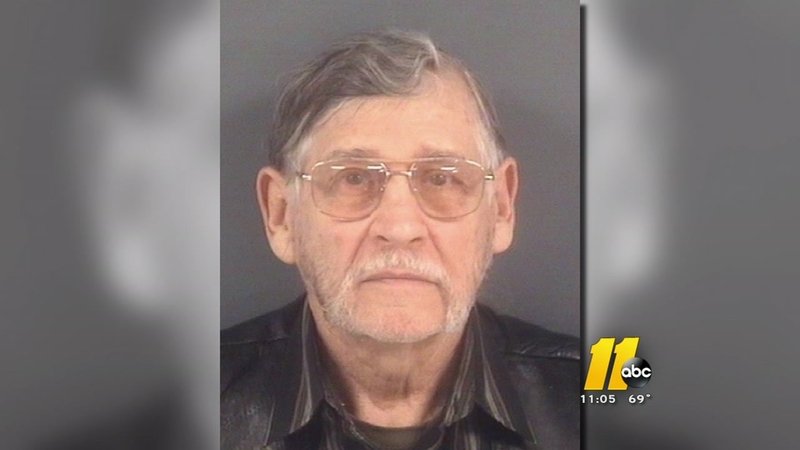 FAYETTEVILLE -- A 78-year-old Linden man has been arrested after video of him punching another man at Wednesday night's Donald Trump rally went viral.

John Franklin McGraw was initially charged with assault and battery and disorderly conduct. He has now been charged with communicating threats.

The incident happened during one of the 17 interruptions at the Trump campaign event in the Crown Coliseum.

Rakeem Jones was part of a group escorted out by deputies when they began protesting during Trump's speech.

As Jones walked up the stairs, a man with a ponytail and wearing a hat is clearly seen from several camera angles punching Jones in the face.

The man who punched the protestor is punched from behind.

The deputies below Jones appear to be looking down when it happened, but another camera angle appears to show a deputy above looking directly at Jones and the man as he's punched.

An angle from below

Another protester who was with Jones also filmed the incident from his perspective. That video shows both men being escorted out of the building.

Video shot by another protestor

In a news release Thursday, the Cumberland County Sheriff's Office said "deputies who were escorting Jones were looking down to secure their steps so as not to fall as they followed Jones up the stairway toward the exit," and did not see the assault.

Right after he was escorted out of the building, Jones told the Washington Post he was upset deputies did not arrest the man who hit him right away.

"It's happening at all these rallies now and they're letting it ride," Jones said. "The police jumped on me like I was the one swinging."

He added: "My eye still hurts. It's just shocking. The shock of it all is starting to set in. It's like this dude really hit me and they let him get away with it. I was basically in police custody and got hit."

In its news release, the sheriff's office said:

"Following these events, McGraw could not be located. Ultimately, cell phone video was posted on social media, and upon reviewing it, Sheriff Earl "Moose" Butler directed an investigation to locate the perpetrator of the assault and to effect his arrest. In addition, the Sheriff directed an internal investigation to review the entire incident and the policies and procedures related to it."

"No one should be subjected to such a cowardly, unprovoked act as that committed by McGraw," said Sheriff Butler. "Regardless of political affiliation, speech, race, national origin, color, gender, bad reputation, prior acts, or political demonstration, no other citizen has the right to assault another person or to act in such a way as this defendant did. I hope that the courts will handle this matter with the appropriate severity for McGraw's severe and gross violation of this victim's rights."

After his arrest, McGraw was taken before a magistrate who set bond at $2,500. His bond was increased to $5,000 secured after being processed on the new charge.

The additional charge was filed after Cumberland County Sheriff's detectives reviewed video of the incident and found that McGraw made statements threatening Jones stating that he enjoyed hitting "that loudmouth ... who was "not acting like an American," and threatening next time "to kill him."

McGraw has a court date set for April 6.