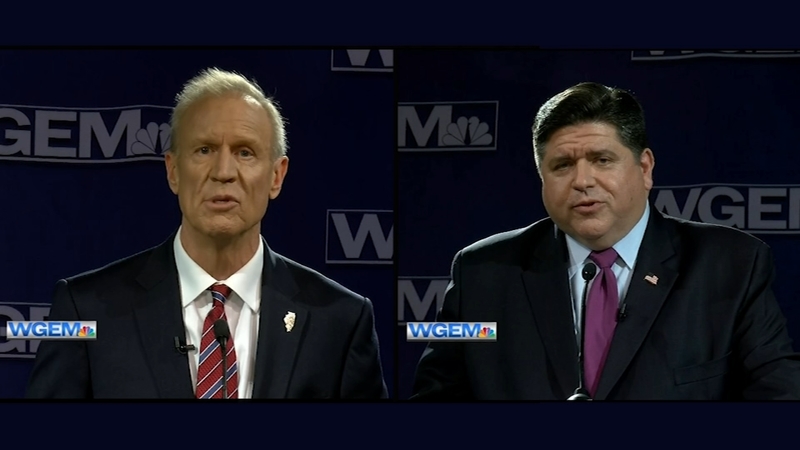 QUINCY, Ill. (WLS) -- Election Day is less than four weeks away and Thursday night the two leading candidates for Illinois governor squared off for the last time in Quincy, where an outbreak of Legionnaire's disease at the veterans' home killed more than a dozen veterans.

Thursday's debate between Governor Bruce Rauner and Democratic candidate JB Pritzker was much more civil than Tuesday's, but the candidates still traded sharp barbs as they tried to paint one another as unfit to be governor.

The debate foregrounded the issue of the 14 veterans who died from Legionnaire's disease at the state veterans' home there.

"Immediately, the first day, action was taken to keep the veterans safe," Rauner said. "Water supplies were shut off, windows were closed, fountains were shut down, bathtubs drained and no longer used."

"It's the height of corruption when you put your personal and your business and your political interests above the interests of the people of Illinois. He covered up the fatal mismanagement at the Quincy Veterans Home," countered Pritzker.

But the billionaire businessman had to answer about his own scandal, for his alleged "scheme to defraud" taxpayers in a property tax case that saved Pritzker $330,000. He has recently paid the money back.

"But that in no way reduces the seriousness of his crime, these are serious white collar crimes, people have gone to prison for far less than Mr. Pritzker has committed," Rauner said.

"You've just heard a desperate rant by a failed governor who is in the final hours of his campaign and his governorship," said Pritzker, while the audience applauded.

Pritzker also took heat for his continued refusal to be specific about rates for his graduated income tax plan.

"Well let me tell you this, we want to make sure we're negotiating it with the people in the legislature," Prtizker answered.

Pritzker fired back after the governor touted various successes and plans for a second term.

"Well the governor made all these promises four years ago," Pritzker said. "He's living in a state of denial, the rest of us are living in the state of Illinois."

The Quincy Veterans Home deaths will very likely be a recurring theme for the rest of the campaign, and earlier today both candidates released ads about it. Pritzker's property tax issue is also something we are sure to keep hearing about with just 26 days until the election.

Rauner has also faced backlash for comments from Tuesday's debate where he seemed to blame illegal immigrants for crime in Chicago.

The governor tried to clarify his comments during a stop at a Chicago business Wednesday.