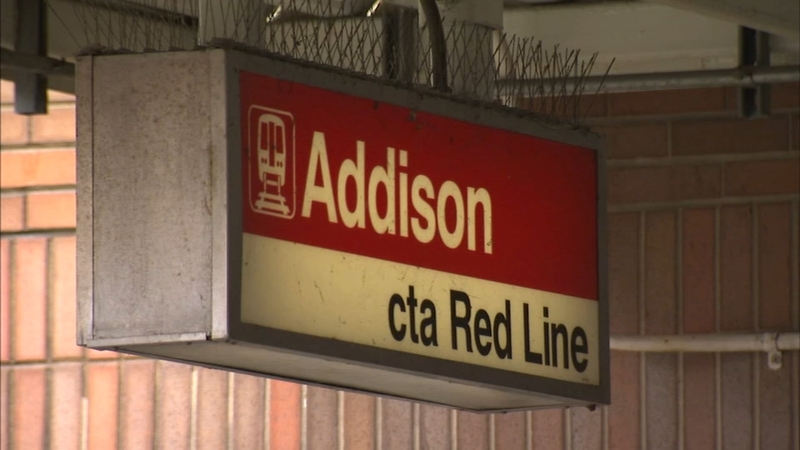 CHICAGO (WLS) -- A pregnant woman was attacked by a man on a CTA Red Line train near the Addison stop Wednesday night, Chicago police said.

Police said the 25-year-old woman was on a northbound train near the Addison station at about 11:11 p.m. when a man punched and kicked her.

ABC7 Eyewitness News spoke with the woman, who only wished to be identified by her first name, Ashley. She said she felt alone as she endured the beating.

"It is ridiculous. Somebody should have done something," she said.

Ashley said she heard the man saying derogatory things about women prior to the attack. She ducked her head as he got in her face.

Ashley said she pushed the button to speak with the train operator as the man exited the train at Addison.

"I said, 'That was bogus. I'm a female and I'm pregnant,'" she said. "And once I said that he opened the doors again and attacked me."

The man ran down the stairs and out of the station after the attack.

Ashley told ABC7 Eyewitness News she tried asking a CTA employee for help and they responded, "What the f*** I'm going to do? I'm not the police."

Ashley said she's afraid to get back on a CTA train and is calling for more security.

"I think it would protect people riding the train because I'm not the only one who has gotten brutally attacked on the train," she said.

A CTA spokesperson said the company could not comment on the specific incident but that "any such response from an employee is unacceptable."

Police are investigating. No one is in custody.
Report a correction or typo
Related topics:
chicagolakeviewassaultchicago crimecta
Copyright © 2021 WLS-TV. All Rights Reserved.
More Videos
From CNN Newsource affiliates
TOP STORIES