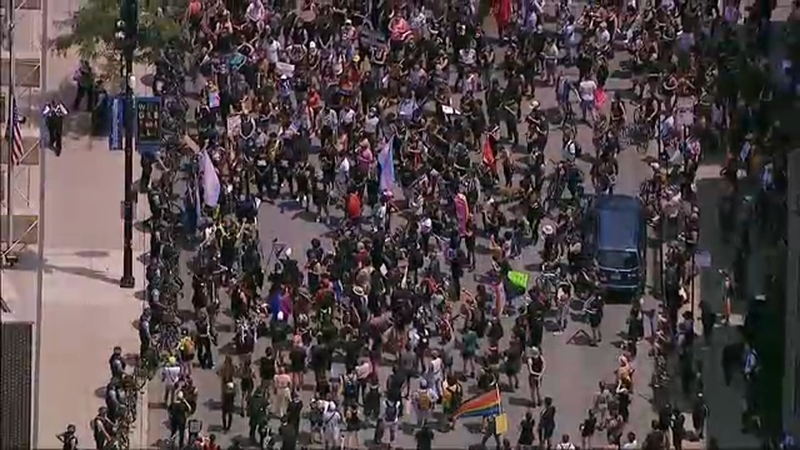 CHICAGO (WLS) -- It's Pride month and although Chicago's annual Pride Parade has been canceled this year due to COVID-19 concerns, a group of LGBTQ activists and community members marched through the North Side to "reclaim Pride."

Organizers said the Sunday march and rally is about reclaiming the grassroots efforts that launched the LGBTQ movement.

Hundreds of people gathered near the CTA Belmont station in the Lakeview neighborhood at noon. The rally and march all rolled into one, gaining steam and participants. Swelling into the thousands, marchers made their way along the 2-mile route north to Uptown.

It's Pride month and although Chicago's Pride Parade has been canceled this year due to COVID-19 concerns, a group of LGBTQ activist are holding their own march to "reclaim Pride."

"The reason the march is so important is to highlight those lives that we lost and highlight the people whose lives may not have been lost, but have been wrecked just because they exist openly," said Ashabi Owagboriaye.

Chicago Pride is returning to the movement's roots Sunday; instead of the annual raucous Boystown parade, a protest for Black trans lives has been organized.

Unlike Pride celebrations of years past, gone were the crowds watching from the sidelines, the colorful corporate-sponsored floats and the gladhanding politicians. In its place was a grassroots movement centered on Black and brown voices, especially transgender voices, the same ones that launched the gay rights movement back in 1969 as a rebellion against police violence.

"Every year we continue to say, yeah let's go out to Pride, let's go out to celebrate, but all the time we forget to highlight the fact that Black trans women are still out there and we still need justice and still need a lot of resources," said Alexis Abarca.

It was just two weeks ago that the U.S. Supreme Court ruled that LGBTQ employees are protected from discrimination under the 1964 Civil Rights Act. But transgender women of color are still killed so often that the American Medical Association declared it an epidemic just last year.

With so many people out, social distancing is nearly impossible, which is why organizers made it clear that masks were required for those participating. Most who attended seemed to have complied with that request.