WLS
By Chuck Goudie and Barb Markoff, Christine Tressel and Ross Weidner
CHICAGO (WLS) -- A prominent property management president said the residents he represents and the company's staff do not feel safe in Chicago after the city was hit by looters again on Sunday. Sudler President Steven Levy sent a letter to Mayor Lightfoot on Wednesday to express his concern. 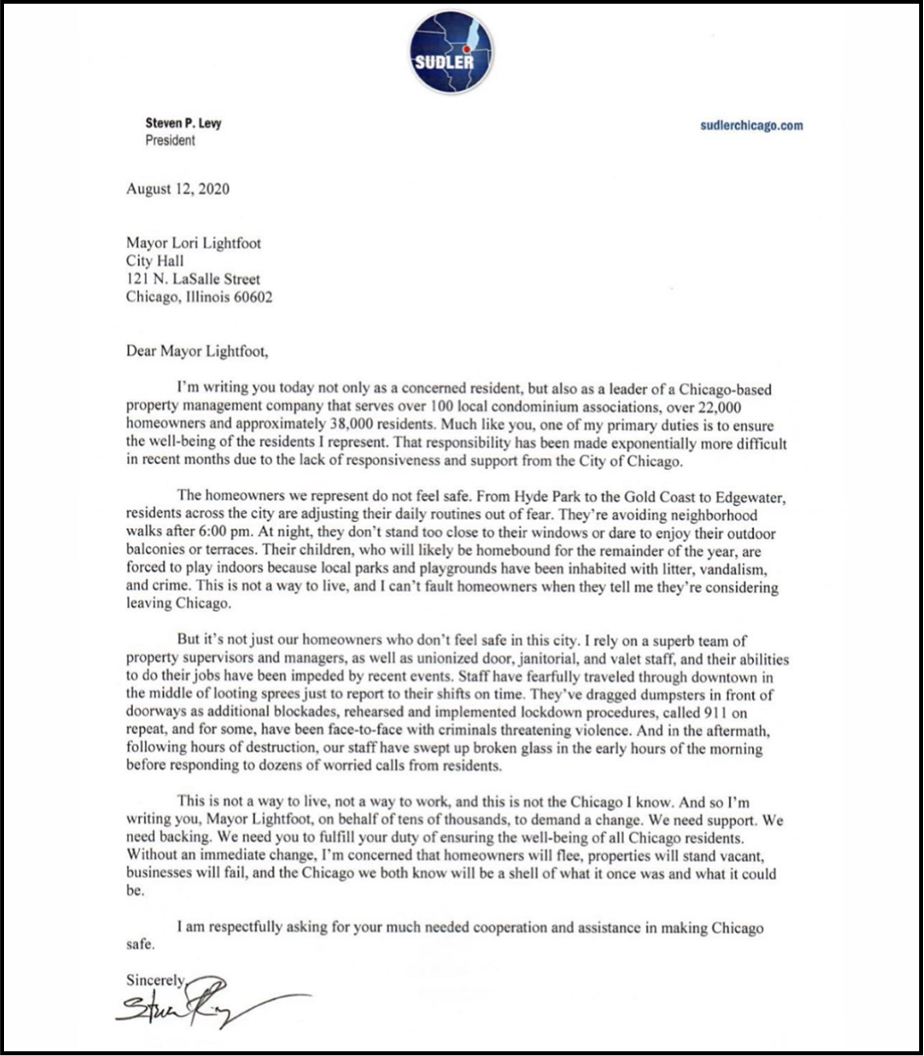 "There is no higher priority for the City than ensuring the safety of all Chicagoans and their communities, which is why Mayor Lightfoot is utilizing every last City resource to not only prevent looting but ensure those who commit the kinds of criminal acts we saw on Monday are brought to justice. As part of the City's neighborhood protection plan, the Chicago Police Department has continued working with all City departments and agencies to ensure that Chicago's communities, as well as its downtown area, have the police resources and infrastructure assets, which includes salt and tow trucks, needed to stay safe and protected. This includes deploying a heavier police presence along Chicago's shopping districts, restricting access to the downtown area overnight, and deploying more than 100 Transportation, Streets and Sanitation and other infrastructure trucks and resources along our commercial corridors. On top of that, the Department has established a special team of detectives to identify suspects, stolen merchandise and ensure offenders are held accountable. We will continue to work closely with local businesses, property management companies and residents to ensure their concerns are not only addressed but additional safety and security measures are in place to prevent any further looting and civil unrest."

The I-Team has been told investigators believe the caravan of looters this week were a mix of organized thieves, many of whom are gang members, with others who saw social media posts and joined the free-for-all.

When looters broke into stores early Monday morning, it looked as though Chicago police were outnumbered and outmaneuvered. A source familiar with CPD tactics tells the I-Team there was no comprehensive, layered response plan in place when retail raids and wholesale looting began in the city.

Even though authorities have admitted that social media messages went out Sunday to encourage a downtown plunder at midnight, police in riot gear were not in place to stop caravans of thieves and looters from rolling unchecked onto Chicago's Magnificent Mile and Oak Street.

One potential factor according to a source knowledgeable with what happened: CPD's once robust practice of using social media monitoring software is now tapped less frequently because of lawsuits filed by civil liberties organizations alleging the department was spying on activity protected by the First Amendment.

The I-Team has learned this week's well-organized groups of looters used rental trucks to haul away items from stores. That also happened during the first round of looting less than three months ago, when we are told both rental companies and CPD had not realized there was an unusual number of stolen or un-returned trucks in the area.
Report a correction or typo
Related topics:
chicagoloopgold coastchicago crimelori lightfootlootingchicago violencei teamhomeowners
Copyright © 2021 WLS-TV. All Rights Reserved.
I-TEAM