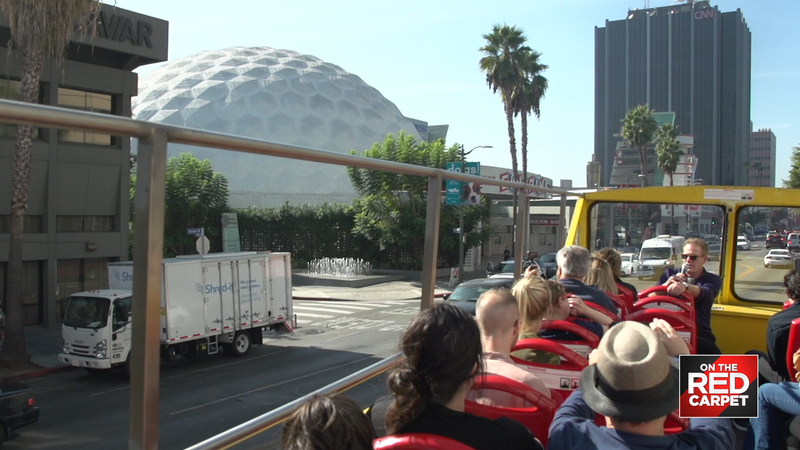 Step back to 1969 with locations from Tarantino's film

LOS ANGELES -- It's no secret that Quentin Tarantino's "Once Upon a Time in Hollywood" is getting a lot of buzz this awards season, but now it's time to turn the spotlight on what really brought the movie to life: the locations. Tarantino aimed to transform 2018 Hollywood into 1969 Hollywood without the use of CGI, lending to the film's authentic feel.

On The Red Carpet host Karl Schmid hopped on a double-decker sight-seeing bus with the film's production designer Barbara Ling and supervising location manager Rick Schuler. This was no ordinary tour, and Schmid got the chance to step into the world of Tarantino's latest film.

The first stop was in Westwood, home of the Bruin and Fox theaters. These legendary theaters are Westwood staples built in the 1930s, but something about them did have to be replaced: the marquees.

"All of them are LED marquees now, and we needed to replace that and the Fox with...the real old marquees which [are] backlit with the letters," Ling revealed. Ling also remodeled the surrounding storefronts to make them more historically accurate, even giving the popular Stan's Donuts a makeover.

The next stop on the tour was the iconic Cinerama Dome, which was transformed for the film to look like it did back in 1969. The globe-like theater was reimagined to be depicted as a standalone building for the film.

"When they did openings, they put in huge posters over the doorways and backlit them," Ling said. For accuracy, Tarantino requested that the posters decorating the theater were of "Krakatoa East of Java" because it was the correct film for the particular week that that scene in "Once Upon a Time in Hollywood" took place.

The last stop on the tour was the oldest restaurant in Hollywood: Musso & Frank Grill. The famed eatery was the backdrop for a popular scene between Leonardo DiCaprio and Brad Pitt in the film. Marked by a long list of iconic patronage, Schuler chose the restaurant for its status within the Los Angeles film industry.

"We were lucky with that place," Schuler said of the legendary Hollywood restaurant. "The wood was still there, the booths were still there. It's deep in history from Charlie Chaplin's booth...so there's a lot of culture there." In addition to Chaplin, other famous customers of the restaurant included Marilyn Monroe, Humphrey Bogart, Harry Warner, and Mary Pickford.

Musso & Frank Grill is now celebrating their 100th year in business and even received a special award due to their history and culture.

"After we did the movie Musso & Frank's was given a star on the walk of fame in front of their restaurant, which I think is the first restaurant that actually got a star," said Schuler.

Ling has already taken home two awards, for production design and art direction in Tarantino's film, and is nominated for more to be announced early next year.