Archbishop Cupich arrives in Rome to be elevated to cardinal 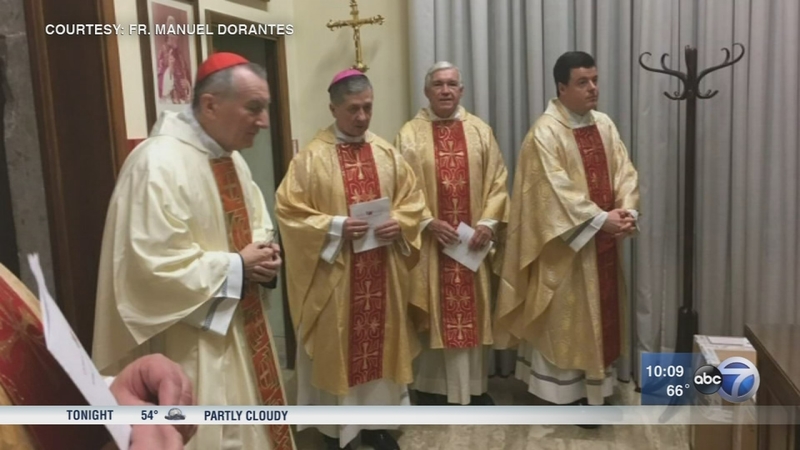 Archbishop Cupich in Rome for elevation

ROME (WLS) -- The journey to celebrate Archbishop Blase Cupich's elevation to cardinal is now underway. The archbishop will become a cardinal on Saturday.

Cupich arrived in Rome Thursday for the events leading up to him becoming Chicago's new cardinal. He made his first public appearance outside the Vatican Thursday.

"I think it's a great day for Chicago. See, we have a part to play in the universal church. I'm just the latest chapter," Cupich said.

When Pope Francis mentioned the archbishop's name in October, it fulfilled a decision that many Chicago Catholics saw as inevitable. Cupich will become Chicago's seventh cardinal archbishop.

Cupich has never been one to bask in accolades, turning attention instead to his mission.

"The Holy Father wants us to be beyond the message, but to be in the trenches, those churches who are field hospitals in the world. My hope is to live up to that," he said.

Cupich already sits on the Vatican committee that recommends which priests should become bishops. Now he has been hand-picked by Pope Francis - again - not merely to be a member of an "inner circle," but outwardly focus on people.

"It's a tremendous honor and also a great responsibility to carry on Pope Francis' vision, which is to try and recommit the church to something that's not self-reverential but to reach out to the margins of society and be very transformative," said Jack Wall, president of Catholic Extension.

That has been the pope's message from the start, and now as Chicago's archbishop becomes a cardinal he gets a larger stage and a louder voice in re-shaping the Catholic Church.

Nearly 40 of Archbishop Cupich's family members have made the trip to Rome to witness his elevation to cardinal.

There will be a sizeable contingent in Rome when Cupich is elevated to cardinal. He comes from a big family, and nearly 40 of his family members made the trip.

Nearly 300 Chicagoans will also be in Rome for the big day, and many others coming from areas touched by his ministry.

"I was told there were 900 when Cardinal George was cardinal, so less are interested in me," Cupich joked.

"I think the people who are coming here, by the way, are not just from Chicago. They're coming from Rapid City - I think there are almost 30 people here from Rapid City. From Omaha, Nebraska, from Spokane, Washington. I lived and worked in Washington D.C., there are people here, and Columbus, Ohio. So I've been around. My mother beagn to wonder whether or not I could keep a job because I kept going from one place to another. So I think people are excited about it, but they're also excited about this pope," he said.

Frank and Angie Sevilla, from northwest suburban Palatine, are in Rome for the elevation as well.

"It's a once in a lifetime opportunity, how often are you able to say that somebody you know, somebody you admie and work with is being elevated to cardinal?" said Frank.

"We can see he's a very different kind of guy. He's a Pope Francis kind of guy, you can see the similarities and you kind of know, there's something with him, he's a special person," Angie said.

The Cupich contingent will grow even larger Friday when Mayor Rahm Emanuel arrives along with Governor Bruce Rauner, Senator Dick Durbin and many other city and state political figures, a group of more than 80 by itself.

But with the ceremony Saturday taking placed inside the massive St. Peter's Basilica, they won't be needing a bigger church.

You can watch Archbishop Cupich's elevation to cardinal LIVE on ABC7Chicago.com Saturday at 4 a.m. Central Time.