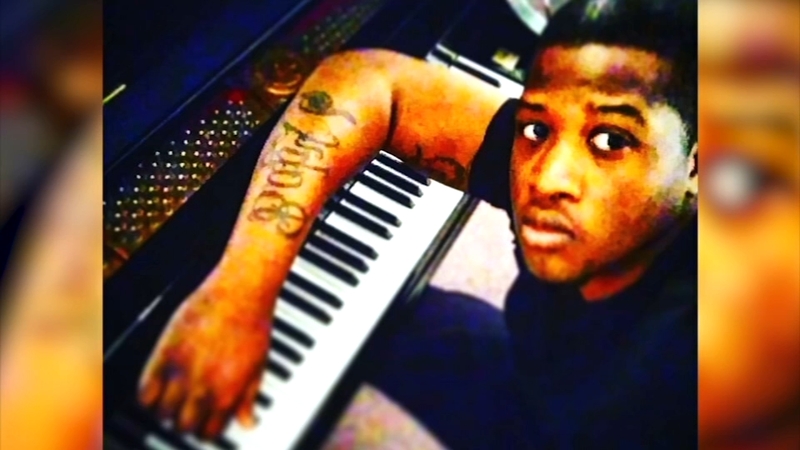 MIDLOTHIAN, Ill. (WLS) -- A security guard was fatally shot by a Midlothian police officer at a Robbins nightclub after he did not respond to calls for him to drop his weapon, according to a preliminary findings of an Illinois State Police investigation released Wednesday.

The fatal shooting of 26-year-old Jemel Roberson has sparked outrage among activists who allege that the shooting was racial.

On Wednesday, the Midlothian police Chief Daniel Delaney disclosed that the officer involved is white, calling the shooting a "'blue on blue,' friendly fire incident."

A security guard was fatally shot by a Midlothian police officer at a Robbins nightclub after he did not respond to calls for him to drop his weapon, state police said.

"There are no words to express our profound sadness and sorrow for the horrible tragedy that occurred early Sunday morning," said Midlothian Mayor Gary L'Heureux at a vigil Wednesday night.

Midlothian police were called to assist Robbins police, who were responding to gunfire at Manny's Blue Room.

According to witnesses, Roberson was trying to detain the suspected shooter, the state police report said.

The report claims Roberson was wearing plain black clothing, with no markings identifying him as a security guard. However, the Roberson family attorney and activists have said witnesses saw Roberson wearing a hat clearly marked security.

Activists and Roberson's friends have protested peacefully outside the Midlothian Police Department, and called for a boycott of Midlothian businesses. The attorney representing Roberson's estate called on the police department to name the officer publicly so it can be determined if he has a history of brutality in the community.

The officer involved in this shooting has been with the Midlothian Police Department for four years and previously had three years of service with another agency, according to a Midlothian police statement released.

The officer is assigned to the patrol division and is also a team leader on the regional swat team (the South Suburban Emergency Response Team). The officer, per standard policy, is on paid administrative leave pending the outcome of the Illinois State Police Public Integrity Task Force investigation.

A candlelight vigil was held Wednesday evening and attended by the musicians Roberson played with as well as his partner, who is pregnant with his second child, and his 9-month-old son. He was remembered as a young father, church organist and a man who aspired to one day join the police force.

His supporters are calling for the state's attorney to take over this investigation.

"We are calling for an economic boycott of the town of Midlothian," said Pastor Anthony Williams. "We are asking people not to shop in Midlothian. We are asking people to close their pocketbooks to the town of Midlothian until they resolve this historical problem of institutional violence against citizens of Robbins."
Meanwhile in Robbins, where the shooting took place, residents there are angry after five of the six village trustees did not show up, cancelling the village board meeting and leaving neighbors with unanswered questions and concerns.

A preliminary investigation has revealed an armed suspect entered the lounge and opened fire striking multiple people inside the establishment. Officers from the Robbins and Midlothian Police Departments, along with other suburban police officers, responded to the call of shots fired and fight in progress. Preliminary reports indicate officers arrived on scene as the incident was ongoing.

Upon his arrival, a Midlothian Police Officer encountered a subject in plain black clothing with no markings readily identifying him as a Security Guard, armed with a gun in the west parking lot. According to witness statements, the Midlothian Officer gave the armed subject multiple verbal commands to drop the gun and get on the ground before ultimately discharging his weapon and striking the subject. The investigation revealed the armed subject was Jemel Roberson, age 26, of Chicago, who was working as a Security Guard at the lounge and according to witness statements; was attempting to subdue a subject suspected to be involved in the initial shooting. Reports indicate officers readily provided medical assistance to multiple gunshot victims, including Roberson. Roberson was transported to a local area hospital where he was pronounced deceased.

Anyone who witnessed the shooting or has any knowledge of the shooting is asked to contact the ISP at (847) 294-4400. Callers can remain anonymous. Witnesses, or anyone with knowledge of the incident can also call the Cook County Sheriff's Police Department at (847) 635-1188. The PITF case is an open and ongoing investigation and no additional information is being released at this time."