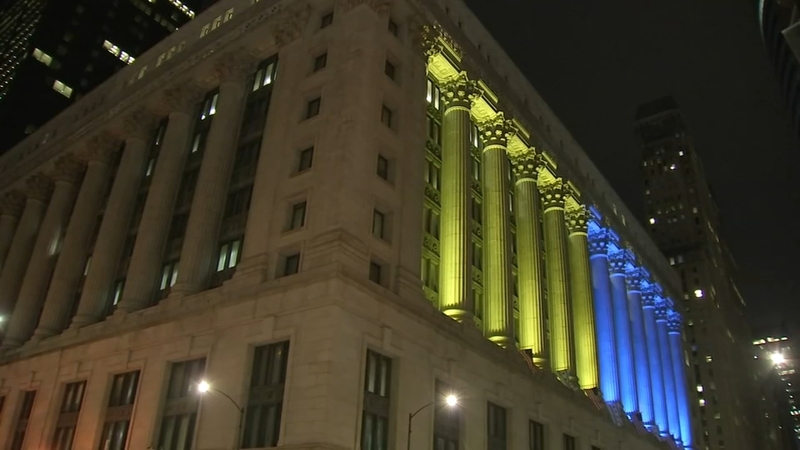 CHICAGO (WLS) -- With City Hall illuminated blue and gold, Chicago is unequivocally standing on Ukraine's side.

If there is ever a time for us to step out of our municipal role it's at a time when the third largest military in the world, a nuclear superpower, is engaging in what can only be described as state sponsored terrorism."

More than 70 Ukrainian soldiers were killed after Russian artillery hit a military base in Okhtyrka, a city between Kharkiv and Kyiv, the head of the region wrote on Telegram.

In a rare move of international repudiation directed at Russia, more than three dozen city council members are now asking the Department of Special Events to sever ties with Moscow, removing it as one of Chicago's sister cities.

"It's the way we can send a message to Putin that the entire world is really against this military action that's basically a crime against humanity," Hopkins said.

Two miles west of Chicago's power center, in the city's Ukrainian Village neighborhood, the highest concentration of Ukrainians in the Midwest are demanding maximum military support for their family members left fighting to defend their homeland.

Young first and second generation Ukrainian American students at St. Nicholas Cathedral School are doing all they can for the war torn country to which they are feel deeply connected.

"The only thing we could do overseas is pray and show support," said Daniel Fuchyln, student.