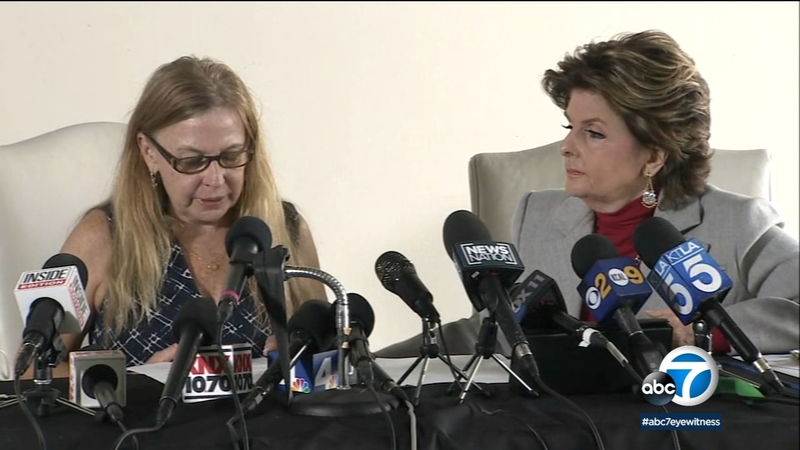 LOS ANGELES -- The script supervisor who called 911 after the fatal "Rust" movie-set shooting in October is the latest crew member to sue Alec Baldwin and others involved in production of the Western film.

Mamie Mitchell and her attorney Gloria Allred held a press conference in Los Angeles Wednesday to detail the allegations made in the lawsuit concerning Baldwin's shooting that killed "Rust" cinematographer Halyna Hutchins and injured director Joel Souza on the New Mexico set.

Allred told reporters that no rehearsal was in progress when Baldwin drew a revolver from his holster and pointed it toward the camera. Furthermore, Mitchell's lawsuit alleges that the scenes scheduled to be rehearsed and filmed that day did not call for a gun to be discharged.

Serge Svetnoy says the bullet narrowly missed him and he held his close friend Halyna Hutchins as she died.

Through tears, Mitchell, who was standing next to Hutchins when she was hit, described watching the cinematographer fall to the ground and learning about her death.

"I stood in my driveway screaming. I'll never forget what happened on the set of 'Rust' that day. I relive the shooting and the sound of the explosion from the gun over and over again," she said. "I'm depressed. I don't feel safe. I feel like at any moment, anything could happen to me and to those that I care about that are standing close to me."

Mitchell was the crew member who alerted law enforcement of the shooting.

"We had two people accidentally shot on a movie set by a prop gun, we need help immediately," Mitchell told a 911 emergency dispatcher on Oct. 21. "We were rehearsing and it went off, and I ran out, we all ran out."

The dispatcher asked if the gun was loaded with a real bullet.

"I cannot tell you. We have two injuries," Mitchell replied. "And this [expletive] AD [assistant director] that yelled at me at lunch, asking about revisions ,.. He's supposed to check the guns. He's responsible for what happens on the set."

Mitchell, who said she has worked as a script supervisor for 40 years, said she always felt safe, stimulated and inspired on movie sets.

In the days leading up to the shooting, a camera crew for the movie walked off the job to protest conditions and production issues that included safety concerns.

"We've now had 3 accidental discharges. This is super unsafe," according to a text message that a crew member sent to a unit production manager.

Santa Fe-area District Attorney Mary Carmack-Altwies also said she is concerned that there were so many levels of safety failures.

MORE | District attorney investigating 'Rust' movie-set shooting: 'We do not have any proof' of sabotage
EMBED More News Videos

During the Wednesday press conference, Mitchell described Hutchins as a friend.

"Halyna walked by [that day] and flashed her gorgeous smile at me. I'm never gonna forget that. She was a great collaborator on this set and my new friend. She was pure light. She just had beautiful energy," she said.

Svetnoy, head of lighting on the film, alleged negligence that caused him "severe emotional distress" that will haunt him forever.

Svetnoy's lawsuit, filed in Los Angeles Superior Court, names nearly two dozen defendants associated with the film including Baldwin, who was both star and a producer; David Halls, the assistant director who handed Baldwin the gun; and Hannah Gutierrez Reed, who was in charge of weapons on the set.