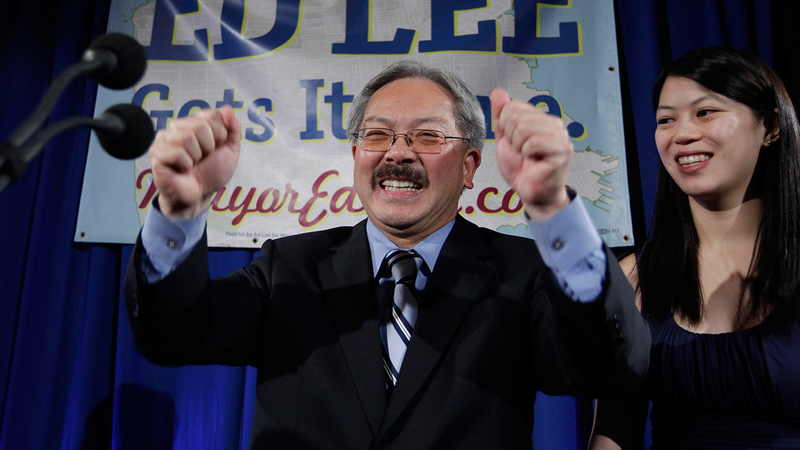 Lee suffered cardiac arrest while he was out shopping at about 10:30 p.m. Monday. He passed away at 1:11 a.m. at Zuckerberg San Francisco General Hospital.

Just yesterday, Lee was at a recycling event in San Francisco where he was smiling and shaking hands.

On Monday, San Francisco Mayor Ed Lee spoke with ABC7 News and appeared to be in good health.

The mayor's office issued a statement this morning with the sad news: "It is with profound sadness and terrible grief that we confirm that Mayor Edwin M. Lee passed away on Tuesday, December 12 at 1:11 a.m. at Zuckerberg San Francisco General Hospital. Family, friends and colleagues were at his side. Our thoughts and prayers are with his wife Anita, his two daughters, Brianna and Tania, and his family."

Several colleagues and officials near and far are remembering Mayor Lee.

Rep. Nancy Pelosi said "He was a true champion for the people & a dear friend to the many lucky enough to know him."

Senator Kamala Harris said: "He was a fierce advocate for civil rights and worked tirelessly for workers' rights and his leadership will be missed."

He was known for his work against homelessness. Before becoming mayor, Lee was City Administrator.

Lee was in Chicago last week for the North American Climate Summit, hosted by Mayor Rahm Emanuel and attended by former President Barack Obama. Lee was one of 50 mayors from around the world who signed the Chicago Climate Charter, their commitment to the tenets of the Paris Agreement.

Obama signed the agreement in 2016, in which countries committed to reducing emissions and increasing the use of renewable and sustainable energy sources. President Donald Trump said in June 2017 that the U.S. would withdraw from the Paris climate accord. This summit was organized in response to that move.

Emanuel extended his condolences to Lee's family and the city of San Francisco in a statement released Tuesday:

"Mayor Ed Lee was passionate about public service, dedicated to the people of San Francisco and deeply devoted to his family and friends. I was proud to call Mayor Lee a friend and colleague, and we were honored by his presence in Chicago just last week as we strengthened our cities' partnership in the fight against climate change. As San Francisco's first Asian-American mayor, he was a trailblazer who paved the path to public service for future generations. Mayor Lee stood up for human decency as the leader of a welcoming city, and his tireless work to make San Francisco a stronger, more inclusive home for all its residents will endure. Amy and my thoughts and prayers are with Mayor Lee's wife, Anita, their daughters Brianna and Tania, their family, friends and the people of San Francisco on this difficult day."

In accordance with the City Charter, Board of Supervisors President London Breed became Acting Mayor of San Francisco, effectively immediately.

Breed is a native San Franciscan. She's a graduate of Galileo High School.

Prior to her election to the Board of Supervisors, she was the Executive Director of the African American Art and Culture Complex.

She was elected to the Board of Supervisors in 2012, representing District 5 which includes the Fillmore/Western Addition, Hayes Valley, Lower Haight, Haight-Ashbury, Japantown, Alamo Square, North of Panhandle, Cole Valley, and Inner Sunset neighborhoods.

Breed was then elected President of the Board in 2015.