WLS
CHICAGO (WLS) -- Remember the first time you saw images of Neil Armstrong on the Moon or heard the infamous phrase, "that's one small step for man, one giant leap for mankind"?

Well now you can relive all the glory for the Apollo 11 Moon Landing as the nation celebrates the 50th anniversary of that historic event.

Fifty years ago, Apollo 11 landed on the moon - a monumental achievement that enthralled the world.

50 years later, cities, museums, and movies are commemorating that momentous occasion with celebrations all week long.

50 years ago today, Neil Armstrong, Mike Collins and I launched into space on a mission of enormous importance. God bless the 400,000 Americans who helped us get to the moon and back. Together, we Americans can do anything! Never forget July 16, 1969! #Apollo50 pic.twitter.com/lX6456UO2N

Here's a rundown of activities and places where you can learn about and celebrate the 50th anniversary of the Apollo 11 Moon Landing in the Chicago area.

Apollo 11: First Steps Edition
With a newly-discovered trove of never-before-seen 70mm footage and audio recordings, "Apollo 11: First Steps Edition" joins Neil Armstrong, Buzz Aldrin and Michael Collins, the Mission Control team and millions of spectators around the world, during those momentous days and hours in 1969 when humankind took a giant leap into the future.

For more information on all of Adler Planetarium's Apollo 11 anniversary events, click here.

Related: Who walked on the moon? A look back at the Apollo moonwalkers 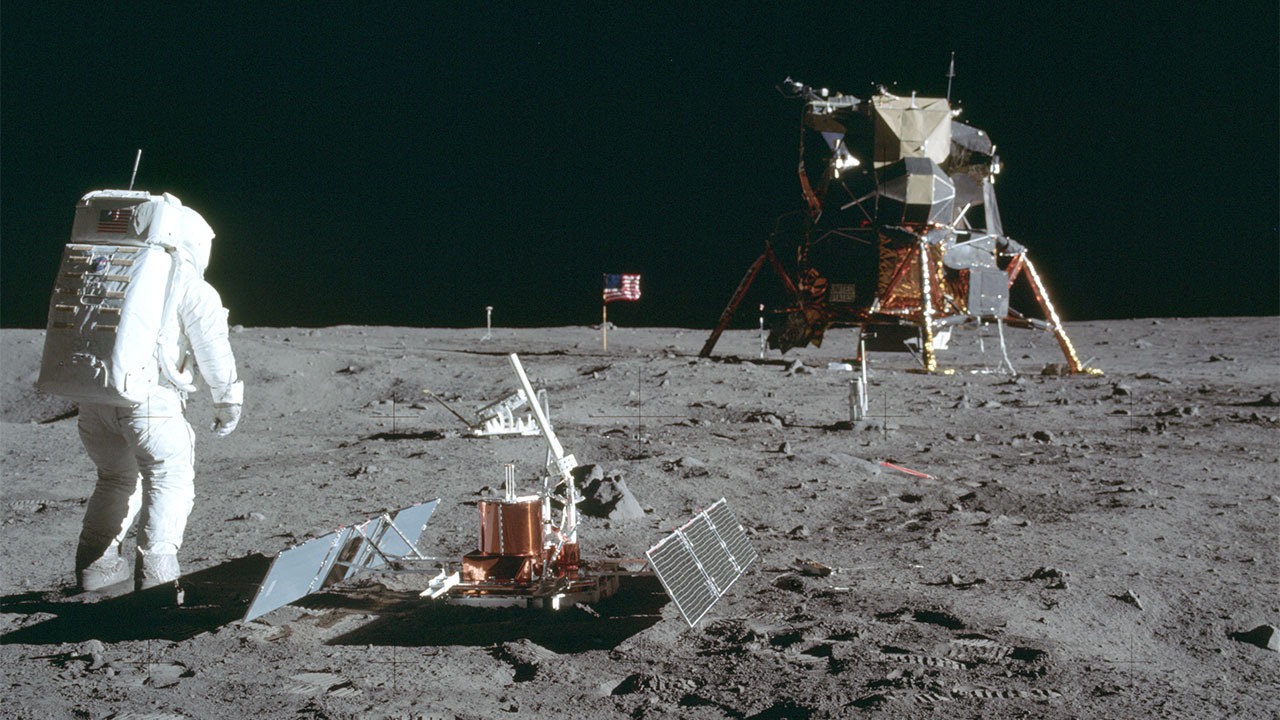 In this July 20, 1969 photo, astronaut Buzz Aldrin Jr. stands next to the Passive Seismic Experiment device on the surface of the moon during the Apollo 11 mission.

Museum of Science and Industry

Adler After Dark: Moonshot
Travel back to 1969 and celebrate the Apollo 11 Moon Landing! Wear your favorite 60's-style attire, enjoy period-themed cocktails and music, and discover the untold stories behind the mission, as well as the 400,000 people whose hard work and dedication made Apollo 11 possible.
Ages 21+ Only

Fly Me to the Moon Yoga
Celebrate this special occasion with a special practice. Much like our monthly Sun Salutations Yoga, this slow Vinyasa Flow class under mesmerizing images in the Grainger Sky Theater will transport you through time and space to our planet's nearest neighbor.

Expect Moon salutations, half-Moon poses, crescent Moon shapes and an opportunity to contemplate the role of the Moon in our history and in our future.

The Moonwalk- alcoholic drink recipe
If you're interested in tasting something reminiscent of the Apollo 11 flight 50 years, then look no further than the Moonwalk.

The drink was created back in 1969 by Joe Gilmore, head bartender at the Savoy's American Bar in London, in honor of the moon landing. Reports say the cocktail was the first thing Armstrong and Aldrin sipped upon their return to Earth.

NASA will hold a 50th Anniversary of Apollo 11 Moon Landing event on July 20, at the Museum of Aviation at Robins Air Force Base, Ga.

You can also relive the historical moment without leaving your home. There are several programs scheduled to run on television. Check your local listings for times.

NASA's Giant Leaps: Past and Future - Celebrating Apollo 50th as we Go Forward to the Moon
On July 19, NASA will broadcast live from NASA's Kennedy Space Center in Florida, the historic, newly-restored Apollo mission control room at Johnson Space Center in Houston and the Marshall Space Flight Center in Huntsville, Alabama. They will also be at the Smithsonian National Air and Space Museum in Washington, with a special guest host. Watch the story of how we got there, and how we'll get there again, hearing directly from Apollo astronauts alongside current and future astronauts, scientists, engineers, and others sharing some untold stories, quirky facts, and personal reflections about journeying to the lunar surface. Watch it on the NASA Live page .

Also on PBS, the documentary "8 Days: To the Moon and Back" will be shown on July 17.
Report a correction or typo
Related topics:
sciencechicagoloopnasasocietymooneventsspacemoon landing 50th
Copyright © 2020 WLS-TV. All Rights Reserved.
MOON LANDING 50TH