WLS
CHICAGO (WLS) -- Students at Senn High School staged a sit-in Wednesday, alleging a teacher made discriminatory remarks toward a peer. That teacher has since been removed from the school.

Crowds of upset students chanted, "We want justice, we want peace" through the halls because they say one of their teachers told a classmate to "go back to your country."

The student said it happened after she refused to stand for the national anthem during a school assembly in January.

Students posted videos of the sit-in on social media, calling for the teacher to be fired.

Chicago Public Schools has opened an investigation into the incident at the Edgewater high school.

In a statement, CPS said its "committed to fostering learning environments that embrace and support all students, and the alleged actions of the teacher in question run counter to our beliefs and priorities as a school district. The district is opening an investigation into the alleged actions, and we support the students who have peacefully raised their concerns."

The school's principal, Mary Beck, sent an email to Senn families Wednesday night, saying she handled the incident "in accordance with CPS policy."

"I notified CPS, I notified everybody within three hours of receiving the report. It is all in writing, it is all time-stamped. I did my job," Beck said in a video posted on Twitter. "I continued to follow through based on the policies and guidelines we have in place."

The email to families also said that Beck met with students after the sit-in and discussed ways to prevent further incidents.

Officials at CPS and the high school have not identified the teacher accused in the incident. 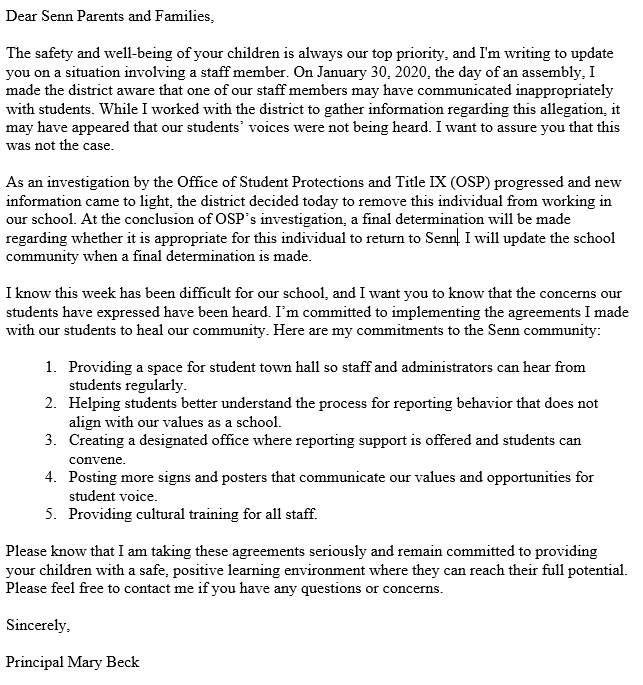 Jalyn Henderson is a Community Journalist at ABC 7 Chicago. She tells stories on the north side of Chicago in neighborhoods like Uptown, Edgewater, Ravenswood, Lincoln Square, West Ridge and Rogers Park. If you have a story to share in these neighborhoods you can send an email to Jalyn.L.Henderson@abc.com
Report a correction or typo
Related topics:
educationchicagoedgewatercommunity journalisthigh schoolprotestchicago public schools
Copyright © 2020 WLS-TV. All Rights Reserved.
More Videos
From CNN Newsource affiliates
TOP STORIES