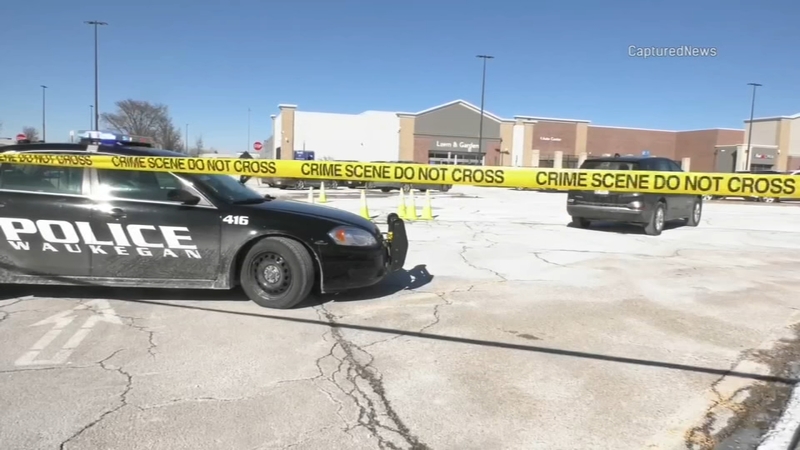 WAUKEGAN, Ill. (WLS) -- A woman has been charged after two men in their 20s were shot Saturday at a Walmart Super Center parking lot in north suburban Waukegan, according to police.

Desteny Rodriguez has been charged with armed robbery and unlawful use of a weapon.

Both police and fire responded to the store at 3900 Fountain Square just at around 1:30 p.m. Video of the scene showed the parking lot littered with shell casings after police said two groups in separate vehicles met up outside the Walmart when an argument ensued.

"This was a very violent act," said Waukegan Deputy Chief Joe Florip. " "We're not sure if the vehicles were shooting at each other, or if there were just shootings from one vehicle."

The group of four met in the Walmart parking lot, police said. At that point, Detectives believe, Rodriguez attempted to rob the two males in the Altima. During the incident, shots were fired and both vehicles fled the area.

But when officers first arrived on scene, no shooting victims were found.

The Durango fled to the area of Washington and Westwaukee, where it crashed into other vehicles, police said. The male passenger in the Durango was struck multiple times by gunfire and transported to an area hospital in serious condition by the Waukegan Fire Department. The Durango passenger remains in serious condition at the hospital.
Rodriguez was driving the Durango, police ssaid. She was immediately taken into custody.

The Altima also fled the area and went to an area hospital, police said. One of the occupants in the Altima was struck by gunfire, but the wound was described as "superficial". That man was released from the hospital and taken to the WPD and released. The other occupant in the Altima has not, yet, been located.

Detectives recovered two semi-automatic pistols and an "assault style weapon" in the Durango. They have not released the brands or calibers of the three weapons recovered.

Both vehicles are in WPD custody.

Police said this investigation is open and active. More arrests are possible, however much follow up is needed.

Rodriquez has a last known address in Round Lake, Illinois. It is believed that the other three individuals involved in this incident are also from the greater Round Lake Beach Area.

Police said there's no threat to the community regarding this case but some residents said they're still shaken up.

"Especially for kids to have to witness something like that, I'd been terrified," said Waukegan resident Teaqua Matsey.

Concern still looms over some shoppers about returning to this Walmart.

"That could've been anybody's anybody. It didn't have to be, necessarily, the people they were going after, and that's what is the scary part. It's always that way. Most of the time, the shooters don't even get who they really want," said Matsey.

According to a Walmart spokesperson confirmed no associates were involved.

"We're cooperating with law enforcement on this matter," the spokesperson said in a written statement.