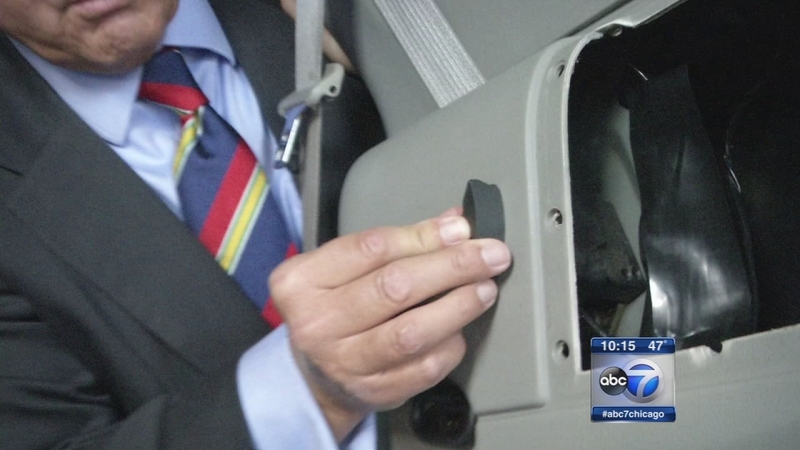 CHICAGO (WLS) -- The ABC7 I-Team investigated a secret smuggling operation hidden in plain sight in Chicago and the suburbs.

They look just like typical SUVs on the way to soccer practice, but hidden inside these everyday family vehicles are hideaways, secret trap doors, and a stash of drugs or dirty money. And high stakes cartels may be driving them to a parking lot near you.

"It's a never-ending game on how we attack these guys," said Kenneth Popovits, a Homeland Security Investigations special agent.

"It was used to transport money within the city of Chicago. Press the rear defrost, that sends the electrical current back to the rear speaker. Utilize the magnet, and it pops the speaker box. This one was loaded with, when we took it off, $60,000," Popovits said.

These hidden compartments, called traps, look like they're a normal part of the vehicle. Instead, they're hidden stashaways for cartel operatives to traffic money.

As customers wheel shopping carts and carry plants through a home improvement store, parking lot agents say this is a secret meet-up to trade drug cash. Here, another quick exchange: a black bag of dirty money handed over to a courier.

"We see the money flowing like there's no tomorrow, every single city, it just happens. It's nonstop, millions of dollars are leaving the city every single day. Every single neighborhood in the city, outside the city suburbs, they're all affected," Popovits said. "It's pretty slick, once again, it's another SUV."

ABC7's Chuck Goudie says, "Looking at it from here, it just looks like a trip to the grocery store!"

"That's it, and that's exactly what they want. Properly registered, no problems with it whatsoever. They want to roll down the street without any intervention from law enforcement," Popovits said.

Goudie: "Ok, so how is this one rigged?"
Popovits: "So here on the center console, you lift it up, and there's a cigarette lighter jack, take a cell phone plug, and they've got two aftermarket screws."
Goudie: "And the one screw activates the trap to open it, so you just touch it and it completes the circuit?"
Popovits: "That's exactly right."
Goudie: "Even if you were suspicious, it wouldn't appear as this were anything other than somebody's family car."
Popovits: "Right, they go to great lengths to make sure that these vehicles look like they came right off the showroom floor."

The dirty cars even look like normal rides - a dance studio sticker, Marine Corps logo, even this "Jesus fish" - agents say it's all part of blending in.

"Hit the rear defrost, complete the cycle with the magnet on the side wall here and then you can hear the activation of the pistons, lifting the entire back part of the vehicle up. In this vehicle we found about $400,000," Popovits said.

It's a fight to find the secret stash that isn't ending any time soon.

It isn't only drugs and money being smuggled in these tricked-up trap cars. More than a week ago in Germany, police found an arsenal of Kalashnikov assault rifles, pistols, ammo, hand grenades and TNT - all hidden behind the kind of trap doors we just showed you.

The navigation system was programmed for Paris, but counter-terrorism officials there were never notified and reports now link the suspect to the attacks in France.