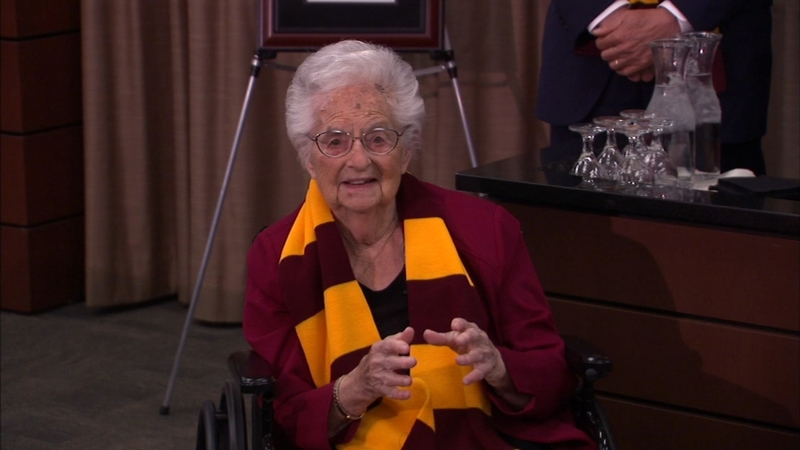 "It's very dangerous to give me a microphone," Sister Jean Dolores Schmidt joked Friday.

That's when she became a pro at TV interviews.

"Someone said 'oh Sister Jean you have more in this room than Tom Brady did," she said.

During a Friday afternoon award ceremony, the 99-year-old Catholic nun was honored for her achievements outside Gentile Arena. Over the years, Sister Jean has worked to expand higher education opportunities to immigrant students. She's also involved in a program that pairs students with members of a nearby retirement community.

But State Senator John Cullerton, who nominated Sister Jean for the 2018 Senior Hall of Fame award, said he would have done it regardless of the team's winning streak.

"She's been a goodwill ambassador for the school, the city and the state," Cullerton said."Frankly, Sister Jean, I'm stunned that so far no one has mentioned you for mayor."

"The world knows her as the chaplain for the Loyola Men's Basketball team but here in Chicago, and on the Loyola campus - we know her as a teacher, counselor, adviser, coach, and civil rights activist," Rauner said. "She sets a world-class example for all of us to follow."

Sister Jean wasn't shy about taking the microphone this afternoon.

"I just get so emotional when I get these awards when I hear all these wonderful things said about myself and its sort of a review of life as it were," Sister Jean said.

She made sure to don the school colors for the end of her speech and invited everyone to Loyola's exhibition game on October 23.

"But you're going to have to come early because the Gentile [Arena] is going to be packed!" she said.

Inductees are selected through a statewide nomination process.

The Senior Illinoisans Hall of Fame was created by the Illinois General Assembly in 1994 and since then, 117 people have been inducted into the Hall of Fame, including Sister Jean.