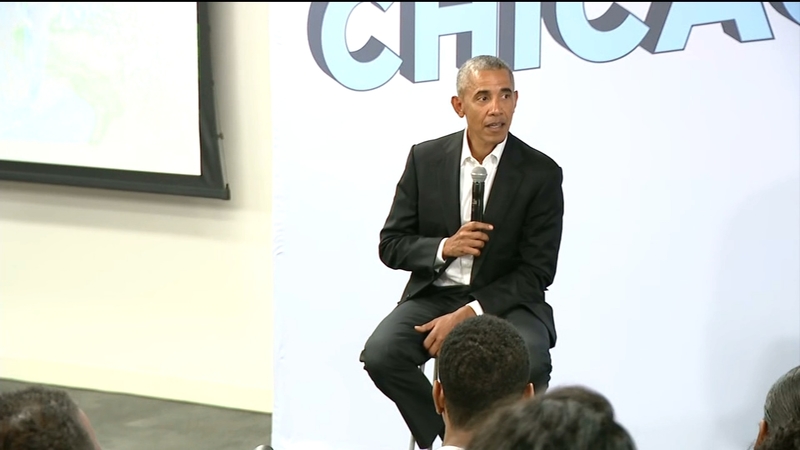 CHICAGO (WLS) -- President Barack Obama was in Chicago Tuesday, meeting with student participants in the One Summer Chicago program and thanking community members for their support at an Obama Foundation meeting.

Obama attended a meeting at Obama Foundation headquarters in Hyde Park on the city's South Side. Even as the former president, he can somehow still sip into a South Side room momentarily unnoticed.

"Hello everybody, don't get up. Sit down, everybody," he told the room when they noticed him.

The former president is attempting to create a presidential complex unlike any ever built.

"How do we give back, how do we make sure this center, museum, is a tribute to not us but to all the people who have made this so special," Obama said.

The room was filled with a hand-picked group of 37 students from around the world convening in Chicago as part of the inaugural Obama Foundation Scholars program.

"The ability for us to fill this magnificent part of the city up with people and life and activity is something I'm hoping generations of Chicagoans are going to enjoy for years to come," Obama said.

Before surprising the scholars, Obama and Mayor Rahm Emanuel dropped in on school children for a quick lesson on coding at Eric Solorio Academy High School in the city's Gage Park neighborhood.

"My heart was pounding. I was already feeling pressure knowing that I was going to have to present," said Jasmin Lara, Eric Solorio Academy student.

The students spent their summer learning smartphone app development through the One Summer Chicago program. The program builds on Obama's Computer Science For All initiative, which was launched in 2016.

.@BarackObama and @ChicagosMayor spent the afternoon at @SolorioHS with youth who learned coding as part of Chicago's summer jobs program, hearing about the students' experiences and their plans. As Pres. Obama said, the program gives youth "exposure to what might be possible.” pic.twitter.com/vk1Rk4iDvW

The former president shook hands, signed paintings and left future coders with a sense of 'yes they can.'

"It was a good eye opener to my future," Lara said.