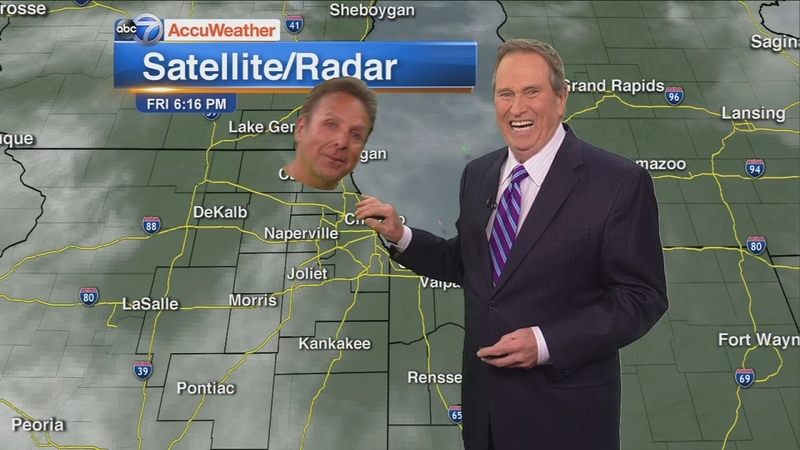 CHICAGO (WLS) -- After 33 years at ABC7 and more than four decades on Chicago TV, meteorologist Jerry Taft is retiring.

His last forecast is on Friday's Eyewitness News at 6 p.m.

Taft's colleagues in the weather center and on the anchor desk shared some of their memories over the years and give him well wishes for a very happy retirement.

Jerry never intended to be a television meteorologist.

Jerry never intended to be a television meteorologist.

"Hi, I'm Jerry Taft. I first became interested in meteorology because I fly airplanes," he once said.

He was a captain in the Air Force, in Texas at the time, and took the local weatherman in San Antonio up for a publicity flight for the military. Then, that weatherman turned the tables and put Jerry on the air.

"Made a total fool out of myself," Jerry said.

ABC7 Anchors reflect on Jerry's long career as a meteorologist.

But a few weeks later, that station's boss called to ask Jerry if he wanted a job as a weather caster.

Fortunately for Jerry, and his checkbook, NBC brought him to Chicago.

In 1984, ABC7 hired Jerry. Ever since, it's that self-deprecating style that leads so many viewers to say they love Jerry.

By his own count, he's given us the last word on the weather about 20,000 times.

Something Jerry is widely known for, in addition to predicting the weather, is his sense of humor.

Something Jerry is widely known for, in addition to predicting the weather, is his sense of humor.

He's always been the first to have a little fun on the air, laugh at his own mistakes, and laugh when he catches himself off guard.

"One of the things that makes him so approachable is the fact that he doesn't take himself seriously, he's taking what he does professionally seriously, never himself," said Alan Krashesky.
His laugh is so infectious.

"I call him the professional instigator, because he starts mess and then he leaves," said Cheryl Burton.

"People remember the laugh, I don't know how many newscasts there have been where he gets the giggles," said Kathy Brock.