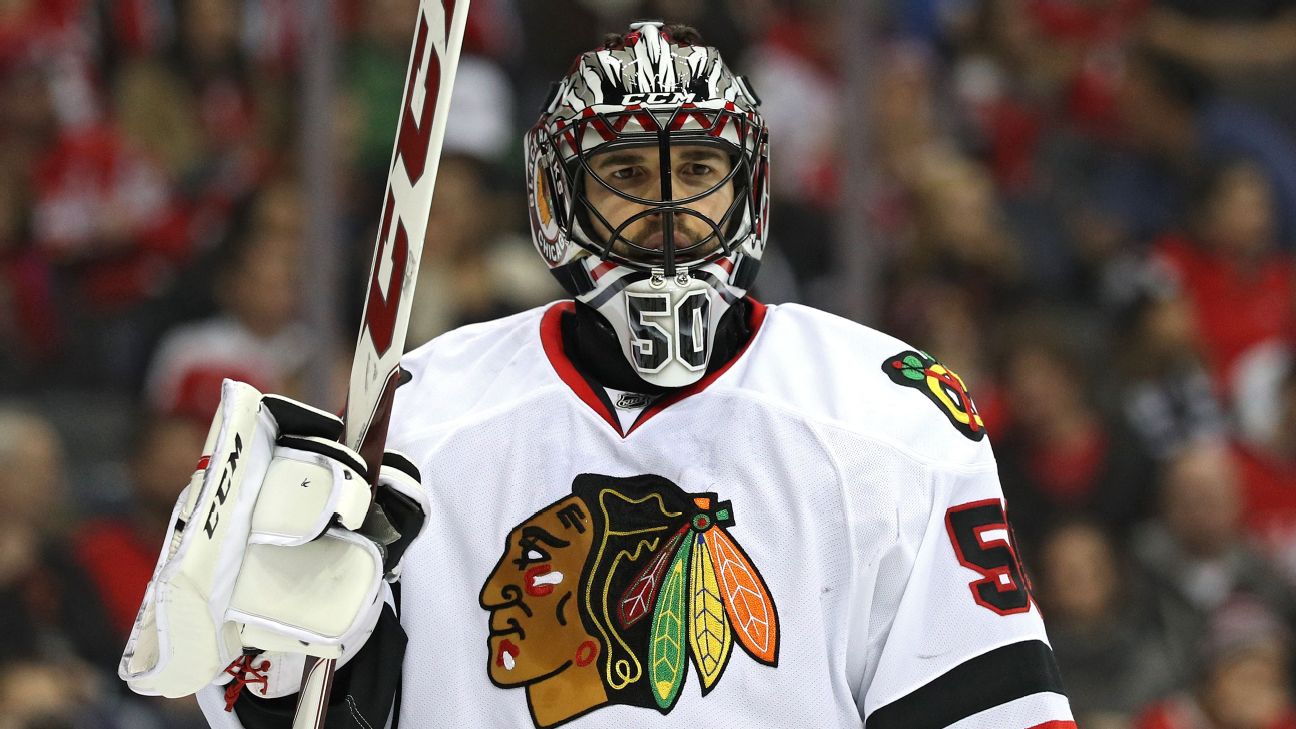 CHICAGO -- Blackhawks goaltender Corey Crawford, who suffered a concussion after hitting his head on a goalpost in Sunday's 7-3 loss to the San Jose Sharks, was placed on injured reserve Monday.

Chicago called up goalie Collin Delia from Rockford, where he was leading the AHL with a .933 save percentage, to go along with a 2.34 GAA.

Crawford's injury came almost a year to the day after his last concussion, which sidelined him for 10 months.

Colliton, as well as the Blackhawks players made available after the game, said they had not yet talked with Crawford, who is in the league's concussion protocol.

"Great goaltender, great guy, an important part of the team," Colliton said. "We hope for a quick recovery."

Crawford exited late in the first period, as San Jose winger Evander Kane and Blackhawks center Dylan Strome crashed toward the net. Crawford took the brunt of the impact from Strome and hit the post. Kane received a penalty for interference.

Strome called it a "hockey play" and said he did not consider the contact from Kane to be intentional.

The 33-year-old Crawford, who has won two Stanley Cups with the Blackhawks, missed the final 47 games last season while dealing with lingering concussion symptoms. He didn't make his debut this season debut until Oct. 18.

Crawford has been vague about what exactly he endured while being sidelined. When he returned to action in October, he told reporters: "It feels good to be back to myself. I'm feeling clear."

"He's been great," defenseman Duncan Keith said. "I think he's been everything we can ask of him. We definitely don't give our goalies much support out there."

Chicago entered Sunday's game at 10-18-6, the second-worst record in the NHL. The Blackhawks defeated the Pittsburgh Penguins on Wednesday night to snap an eight-game losing streak.

Backup goaltender Cam Wardrelieved Crawford on Sunday. Ward, the longtime Carolina Hurricanes starter, was signed in free agency to a one-year, $3 million deal. He allowed five goals on 35 shots Sunday as the Blackhawks squandered a 2-0 lead and gave up five unanswered goals for the loss.

Crawford's contract, which carries a $6 million cap hit, expires at the end of next season.

"Crow is such a big part of our team," defenseman Connor Murphy said. "To lose him is not good. You just feel for him. In a game like that where there were parts where our goalie is hung out to dry, and then for them to take guys crashing on him is not fair either."
Report a correction or typo
Related topics:
sportsespnheadchicago blackhawkscorey crawfordhelmetconcussiongoal postinjury
Copyright © 2020 ESPN Internet Ventures. All rights reserved.
More Videos
From CNN Newsource affiliates
TOP STORIES