Brian Kelly reiterates that Brandon Wimbush is No. 1 QB for Irish 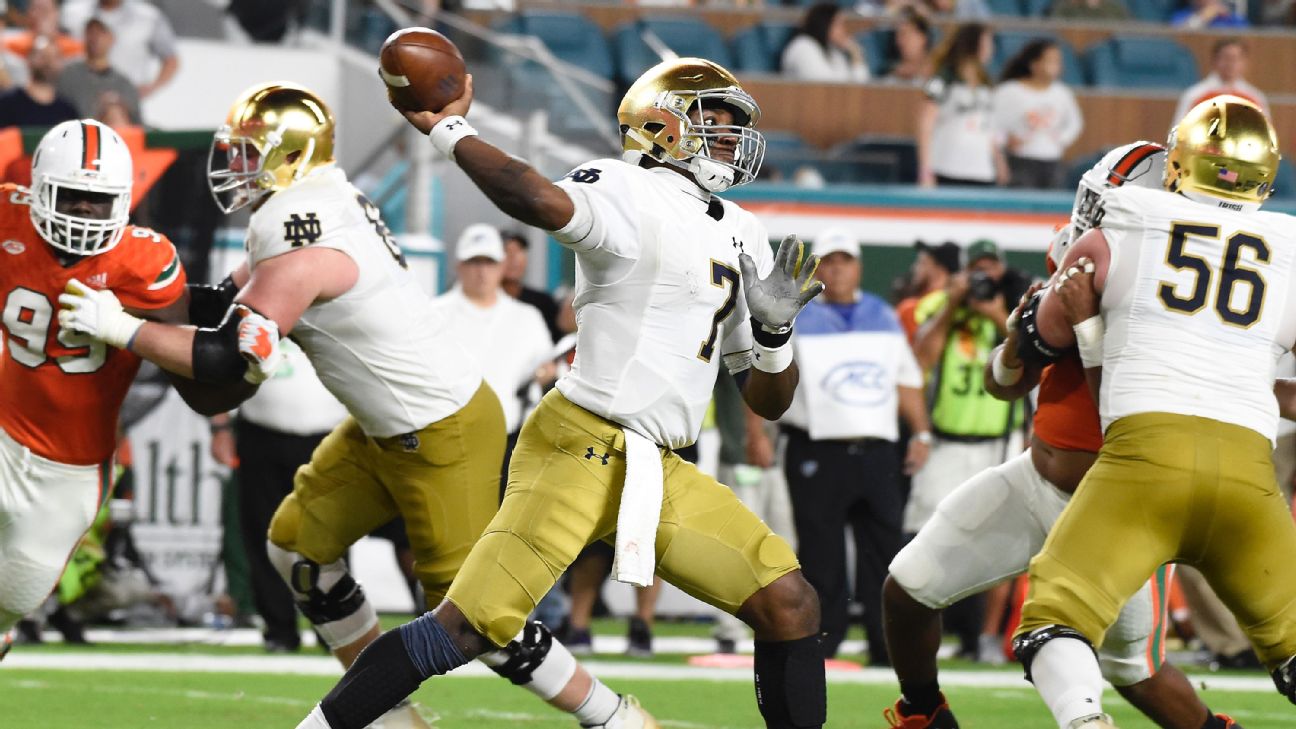 SOUTH BEND, Ind. -- Brandon Wimbush won't need to look over his shoulder Saturday night when No. 12 Notre Dame hosts No. 14 Michigan in the season opener for both teams.

Coach Brian Kelly reiterated that the senior is his No. 1 quarterback.

"Brandon's our starter," Kelly said Tuesday. "We're going to go into the game that he needs to win the game for us."

Last season, Wimbush started 12 games during Notre Dame's 10-3 campaign. He finished with 803 yards and 14 rushing touchdowns and another 1,870 yards and 16 TDs through the air despite a 49 percent completion rate.

Wimbush missed the 33-10 victory at North Carolina last Oct. 7 with a foot sprain, with Ian Book getting the start. Book relieved Wimbush in November road losses against Miami and Stanford and in a 21-17 victory over Louisiana State at the Citrus Bowl. Book completed 14 of 19 passes for 164 yards and two touchdowns, including the winning 55-yard TD with 1:28 remaining to beat the Tigers.

The two quarterbacks battled in the spring and Book, a junior, has looked particularly sharp throwing the ball. Kelly had indicated he might use both quarterbacks at times.

"Sometimes I'm not the clearest," Kelly said Tuesday. "We'll put a game plan together for Brandon Wimbush to win the game for us. If there's any need, we feel great about Ian Book as our No. 2."

Kelly said Wimbush sometimes hurt himself in 2017 trying not to make mistakes. He lost four fumbles and had six passes intercepted.

"We can't have a fear of failure at that position," Kelly said. "We're going to make mistakes. At times he got himself in a place where he didn't want to fail. The quarterback position can't be that. You have to be a guy that is out there making plays. He's a playmaker and he's got to go out there with the confidence to make plays."

Jones, who had 232 rushing yards and three touchdowns in an injury-plagued 2017, is healthy again and expected to start against the Wolverines.

"They all are capable of helping our football team, but we haven't established a 1-2 kind of like we have at the quarterback position," Kelly said. "As it relates to the running back position, it's much different in the sense that I think we rely on different skill sets as 1A, 1B, 1C, 1D in a sense."