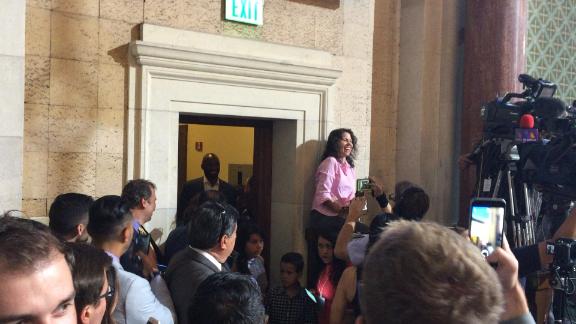 LOS ANGELES -- Even as the Los Angeles City Council paused to honor Kobe Bryant and reflect on everything he has done since he arrived in the city 20 years ago it was evident that Bryant's mind was elsewhere, looking ahead, consumed with what comes next.

Wednesday was "Kobe Bryant Day" in L.A., by official proclamation. And after some awkward bits of democracy -- when citizens used the open microphone to decry city expenditures, say "Go Lakers!" and hurl expletives and racial slurs -- the council got down to honoring Bryant's basketball accomplishments and civic contributions in his two-decade career with the Los Angeles Lakers as purple-and-gold clad fans filled council chambers chanting "Ko-be" and "M-V-P."

"When Kobe Bryant and the Lakers were playing well we were all Angelenos, united and watching greatness," council member Jose Huizar said.

"The unforgettable moments at the buzzer inspired us to work harder on the things in our lives," Mayor Eric Garcetti said.

Bryant, with his daughters and pregnant wife by his side, watched the video recap of his 60-point effort in his final NBA game, then listened to the speeches. Lots of speeches.

He kept using the word "surreal" to describe the day. He'd been feted at City Hall before, but when the Lakers were celebrating championships. This was a celebration of him.

"It feels different because it is different," he said as he entered the garage and took an elevator up to the third floor.

When he had his turn at the microphone he conluded by saying:

"This is an incredible and wonderful city. And after today's amazing celebration, I hope that this legacy extends beyond basketball. I hope that August 24, on this day, is a celebration of passion and hard work, dedication and mentorship. Because teaching the next generation how to achieve greatness is really what it's all about. And together as a city we can do this. We only play for one thing in this city, and that's winning championships. Inspiring the next generation to achieve their dreams, whatever that dream might be, is the most important thing. We need each other to do it. And together we will do that, and certainly we will win championship after championship."

His news conference afterward had little do with basketball. His first two questions were about his newly announced venture capital fund ["I'm not looking for the massive multiple, I'm looking for the passion for the idea," Bryant said] and the challenge of defeating homelessness.

He seemed as comfortable talking about these non-basketball issues as any of the politicians were during the day, and it was evident he was well prepared for his post-basketball transition.

"I was ready," Bryant said. "This is a process that I've been on for 17 years, to try to figure out what comes next. What you understand as athletes, once you hang up the first passion you have to find something that you're just as passionate about. It's very difficult. It was difficult for me. I was born to play basketball. From the age of four, this is all I knew. but I knew it comes to an end, so what comes next? But it took me 17 years for me to figure out what that is. It's a lot of hard work, it's a lot of reading. For the last three years, I was ready."

There was one bit of basketball business to attend to. The city chose this date -- Aug. 24, or 8/24 -- because it represented the two jersey numbers Bryant wore during his career. So how would Bryant differentiate between the two versions of him?

"I think 24 grew to have more perspective," Bryant said. "Eight was like a racehorse, you've got the blinders on, you see one thing, you're going after it. 24, you start getting a little broad[er] perspective, you have a little more awareness."

And which number would he chose to hang in Staples Center?

"I'll probably flip a coin," he said with a grin.