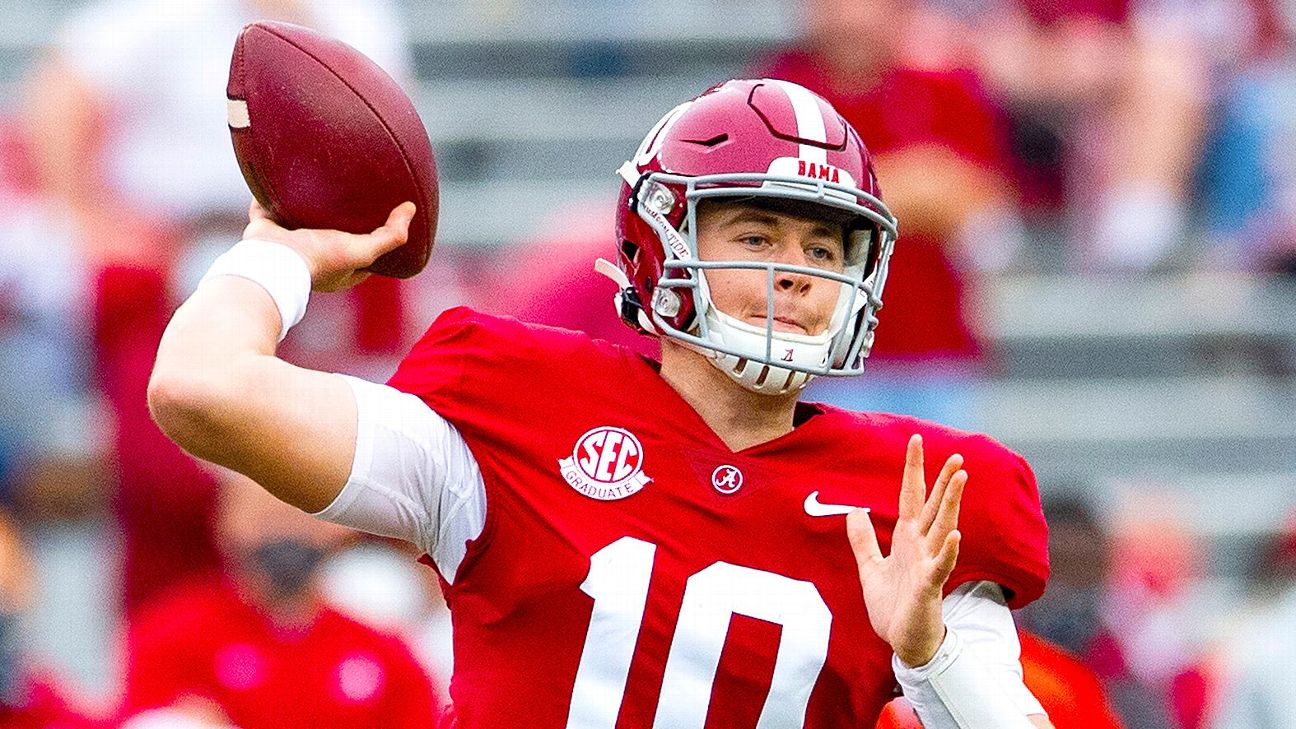 The 2020 College Football Playoff matchups are set, and here's an early look at the two semifinal games that will be played on New Year's Day.

We have an early preview of the TV times, betting lines, most important players, key matchups and X factors for each team when No. 1 Alabama faces No. 4 Notre Dame in the Rose Bowl Game Presented by Capital One and No. 2 Clemson plays No. 3 Ohio State in the Allstate Sugar Bowl to determine who will advance to the College Football Playoff National Championship Presented by AT&T in Miami on Jan. 11.

No. 1 Alabama Crimson Tide vs. No. 4 Notre Dame Fighting Irish

How to watch: ESPN & ESPN App

If there was one constant in an otherwise chaotic college football season played during the COVID-19 pandemic, it was Alabama's dominance in the SEC. The Crimson Tide became the first team in league history to go 10-0 against conference foes.

One thing that was highly unusual this season: Notre Dame joined the ACC as a temporary member because of scheduling concerns during the pandemic. It was the first time in 114 years of playing football that the Irish didn't play as an independent.

Now, two of college football's traditional blue bloods will battle in Arlington on New Year's Day with a trip to the CFP National Championship on the line. Hopefully, it's more competitive than the last time the teams met.

Alabama and Notre Dame are built similarly, but the Crimson Tide hold a decided edge in overall talent. ESPN's Todd McShay projects as many as six Alabama players -- and just one from the Irish -- being selected in the first round of the 2021 NFL draft. The teams have the two best offensive lines in college football, as well as two of the best front sevens on the other side of the ball.

Notre Dame figures to try to slow the game down. Alabama will try to speed it up with wide receiverDeVonta Smith and quarterbackMac Jones against the Irish's suspect secondary.

Key player for Alabama: WR DeVonta Smith. As good as Jones and tailback Najee Harris have been this season, Smith might be the most dangerous player on the field. The senior leads the FBS with 1,511 receiving yards and 98 catches and ranks second with 17 touchdown receptions. Even more impressive, going into Saturday's SEC championship game, he had only two drops in 106 targets and 73.5% of his receptions (61 of 83) were for first downs. Smith was at his best in Alabama's most important games in the regular season; he had 24 catches for 401 yards with four touchdowns in victories over Texas A&M, Georgia and Auburn. Smith is going to be a matchup problem for Irish cornerbacks Clarence Lewis and Nick McCloud.


Key player for Notre Dame: QB Ian Book. For the Fighting Irish to have a chance, Book is going to have to play exceptionally well. He's the all-time winningest quarterback in school history with a 30-4 record. His 88.2 winning percentage ranks him second only to Clemson's Trevor Lawrence (97.1) among active FBS quarterbacks. Book is the only Power 5 quarterback with at least 240 pass attempts and two interceptions or fewer this season. Book ranks second in school history in career passing yards, touchdown passes, rushing yards by a quarterback, total offense and points responsible for.

Matchup to watch: Alabama's rush defense vs. Notre Dame's running game. Since being gashed by Ole Miss for 268 rushing yards and 647 yards of offense in a 63-48 victory on Oct. 10, Alabama's defense had played pretty well, at least until it faced Florida's high-flying offense in the SEC championship game. Only one of the Crimson Tide's last six opponents ran for more than 100 yards, and the Tide allowed just three rushing touchdowns in the seven regular-season games after the Rebels scored four. Notre Dame has one of the most potent rushing attacks in the FBS; redshirt freshman tailback Kyren Williams had six 100-yard games. Notre Dame's experienced offensive line, led by left tackle Liam Eichenberg, will have to find a way to push the Tide's menacing front seven.

X factor: Alabama's CFP experience. The Crimson Tide have participated in six of the seven College Football Playoffs, and Notre Dame is making its second appearance in three years. The Irish's last CFP appearance and their last matchup against Alabama six years before that were largely forgettable.

In a 2018 CFP semifinal at the Cotton Bowl, Clemson walloped the Irish 30-3. Notre Dame surrendered 538 yards of offense, and Book completed 17 of 34 passes for 160 yards with one interception.

In the 2013 BCS National Championship Game, Alabama rolled to a 42-14 rout of the Irish. The Tide scored the game's first 35 points, had 529 yards of offense and held the Irish to only 32 yards rushing. Will the Irish perform better on college football's biggest stage this time?

No. 2 Clemson Tigers vs. No. 3Ohio State Buckeyes

How to watch: ESPN & ESPN App

We can only pray that Clemson-Ohio State Part II is as good as the original a year ago.


In last season's CFP semifinal at the PlayStation Fiesta Bowl, Clemson rallied from a 16-0 deficit and won on quarterback Trevor Lawrence's go-ahead, 34-yard touchdown pass to Travis Etienne with 1:49 to go.

The Buckeyes still had a chance to win, but safety Nolan Turner intercepted Justin Fields' pass in the end zone with 37 seconds left. Ohio State's Chris Olave admitted after the game that he broke off the route, believing Fields was going to scramble. It was OSU's first loss under coach Ryan Day.

Because the Big Ten waited to start this season until late October, the Buckeyes haven't been nearly as tested as Clemson, playing just six games after three others were canceled because of COVID-19 issues.

The Tigers have played nearly twice as many games, their lone loss coming at Notre Dame when Lawrence was sidelined after testing positive for the coronavirus.

Lawrence and Fields are widely regarded as the top two quarterbacks available for the 2021 NFL draft. Hopefully, this duel is as entertaining as last season's.

Key player for Clemson: QB Trevor Lawrence. It's difficult not to feel a little sympathy for Tigers quarterback Trevor Lawrence, who probably got short-changed in what will likely be his final college season. The Heisman Trophy front-runner heading into the season, Lawrence didn't do anything on the field to lose it. Instead, he tested positive for the coronavirus in late October and missed a 34-28 win over Boston College and then a two-overtime loss at Notre Dame, which all but knocked him out of the Heisman race.

Lawrence won his first 25 starts as Clemson's quarterback and is 34-1 in his career, with the lone loss coming against LSU in last season's CFP National Championship. He's completing 69.2% of his passes with 22 touchdowns and four interceptions. Lawrence, who threw for two touchdowns and ran for one more against the Buckeyes last season, might have his way with an OSU secondary that ranked dead last in the Big Ten in pass defense.

Key player for Ohio State: QB Justin Fields. Fields is the easy answer after his epic duel with Lawrence in the CFP semifinal at the PlayStation Fiesta Bowl this past January. The Georgia transfer completed 30 of 46 passes for 320 yards with one touchdown. But he also threw two interceptions in the second half, including the one in the end zone to Turner that all but ended the game. Fields didn't play well against the two best defenses he faced this season. He threw three picks in a 42-35 win over Indiana, and he was 12-for-27 for 114 yards with two more interceptions in a 22-10 victory over Northwestern in Saturday's Big Ten championship game. Fields is fourth in the FBS in completion percentage and leads the Big Ten in quarterback rating.

Matchup to watch: Clemson's pass rush vs. Ohio State's O-line. Clemson's defensive line isn't as experienced or deep as it was in the past, but it's still pretty talented with two true freshman starters in Myles Murphy and Bryan Bresee, who have combined for 6.5 sacks. They'll have their hands full with Ohio State's offensive line. Each of the Buckeyes' starting five weighs 310 pounds or more and paved the way for the Big Ten's leading rushing attack. The Buckeyes have been prone to pressure, allowing an average of 3 sacks per game.

X factor: Will Ohio State be at full strength?The Buckeyes were without leading receiver Chris Olave, linebacker Baron Browning, punter Drue Chrisman and others in the Big Ten championship game. They were among 22 players sidelined for various reasons, including COVID-19 positive tests and contact tracing. Big Ten policy requires any players who test positive for COVID-19 to miss a minimum of 17 days before returning to game action, a reduction from its original 21-game policy.

Olave leads the Buckeyes with 36 receptions for 528 yards and five touchdowns. Browning ranks second on the team with 23 tackles, and Chrisman averages 45.2 yards per punt with eight placed inside the opponents' 20-yard line. 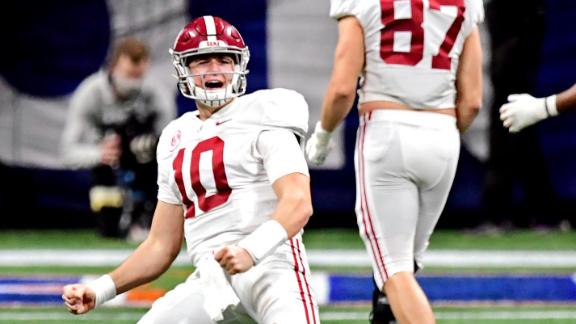 How Bama reached the CFP
Relive the highlights that led to Alabama finishing the season 11-0 and earning a return trip to the College Football Playoff. 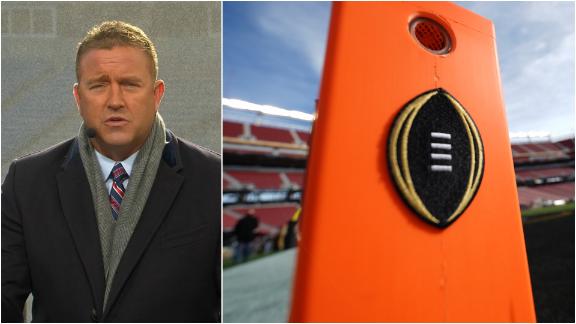