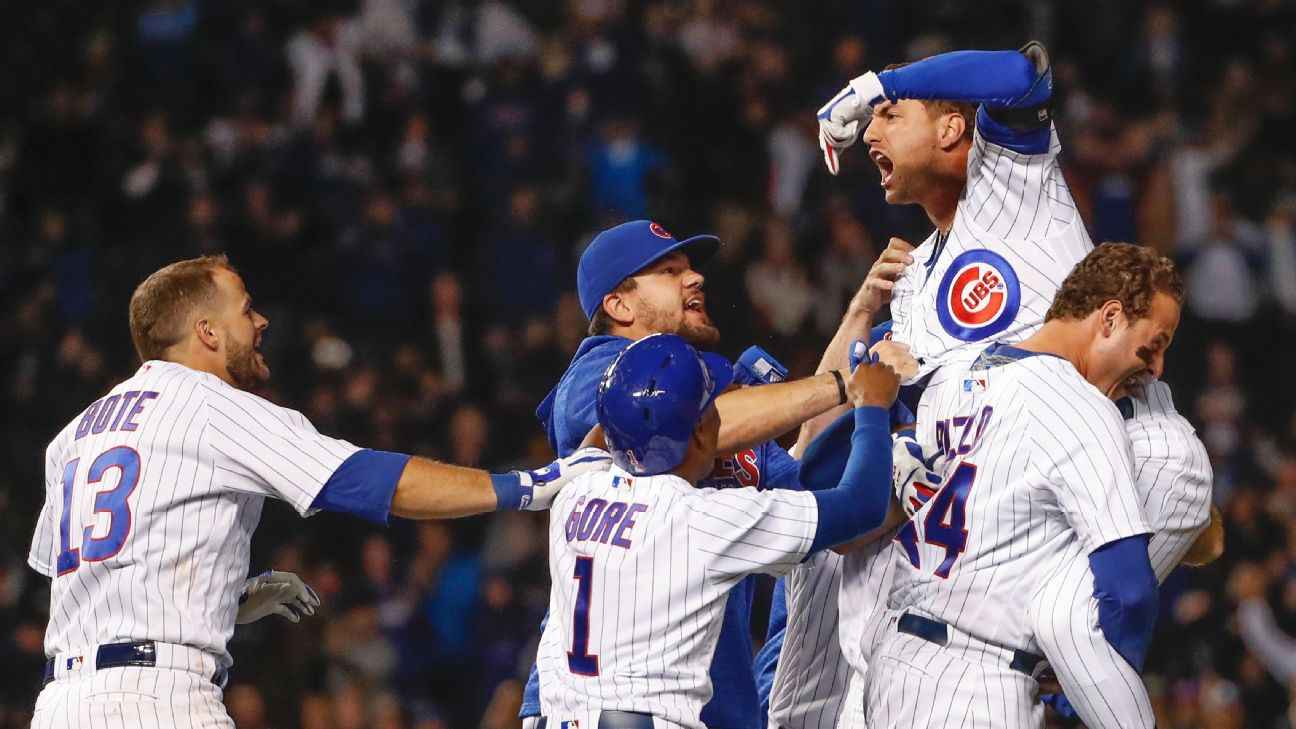 ESPN
By Jesse Rogers
CHICAGO -- For the first time in franchise history, the Chicago Cubs are going to the playoffs for a fourth consecutive season. They clinched at least a spot in the National League wild-card game behind a 7-6 win in 10 innings over the Pittsburgh Pirates on Wednesday.

They're happy to be back in the postseason but have their sights set on a third consecutive division title. The Cubs lead the Milwaukee Brewers by a half-game with four days left in the season.

"We're not taking this for granted," Albert Almora Jr said after the walk-off win. "We're super pumped we're in the playoffs, but our job's not done. We want to take this division and move forward with the best record in the NL."

Almora knocked in the winning run, helping the Cubs salvage another ugly win. They led 6-1 at one point, but their bullpen couldn't hold the lead, while a Steve Bartman-esque moment took place during a critical sequence in the top of the ninth.

With the Cubs leading 6-4, catcher Francisco Cervelli hit a foul ball between the netting on the first-base side. As first baseman Anthony Rizzo went to grab it, so did a fan. Rizzo actually thought he caught the ball. Meanwhile, Cervelli doubled moments later leading to the Pirates tying up the game.

"It was just one of those weird plays," Rizzo said, downplaying the fan interference.

As for giving up the lead, it was a rare late-inning meltdown for the Cubs, as most of September has actually been spent attempting to score more runs. The Cubs' offense has been in a deep freeze for much of the second half. But on Wednesday the Cubs' bats broke out, leading to their playoff berth.

"For the group [of fans] that really wants to lament [be critical], that's a bad method right there, man," manager Joe Maddon said. "We won. We won a tough game against a tough opponent right now. Our division is the strongest in baseball, and we came out on top and qualified for the playoffs once again. And yes, we want to win the division."

Before Wednesday, the Cubs had scored a total of five runs in their last 56 innings against the Pirates -- leading to that fan angst -- so the offensive output was desperately needed. Afterward, there was no champagne celebration, as that will come if the Cubs clinch the NL Central. For now, they'll simply enjoy playing past Sunday.

"We have a ticket in there," first baseman Anthony Rizzo said. "It's not easy to do. Guys are proud of it."
Report a correction or typo
Related topics:
sportsespnpostseasonmlbfrancisco cervelliberthanthony rizzoalbert almora jrchicago cubs
Copyright © 2020 ESPN Internet Ventures. All rights reserved.
More Videos
From CNN Newsource affiliates
TOP STORIES