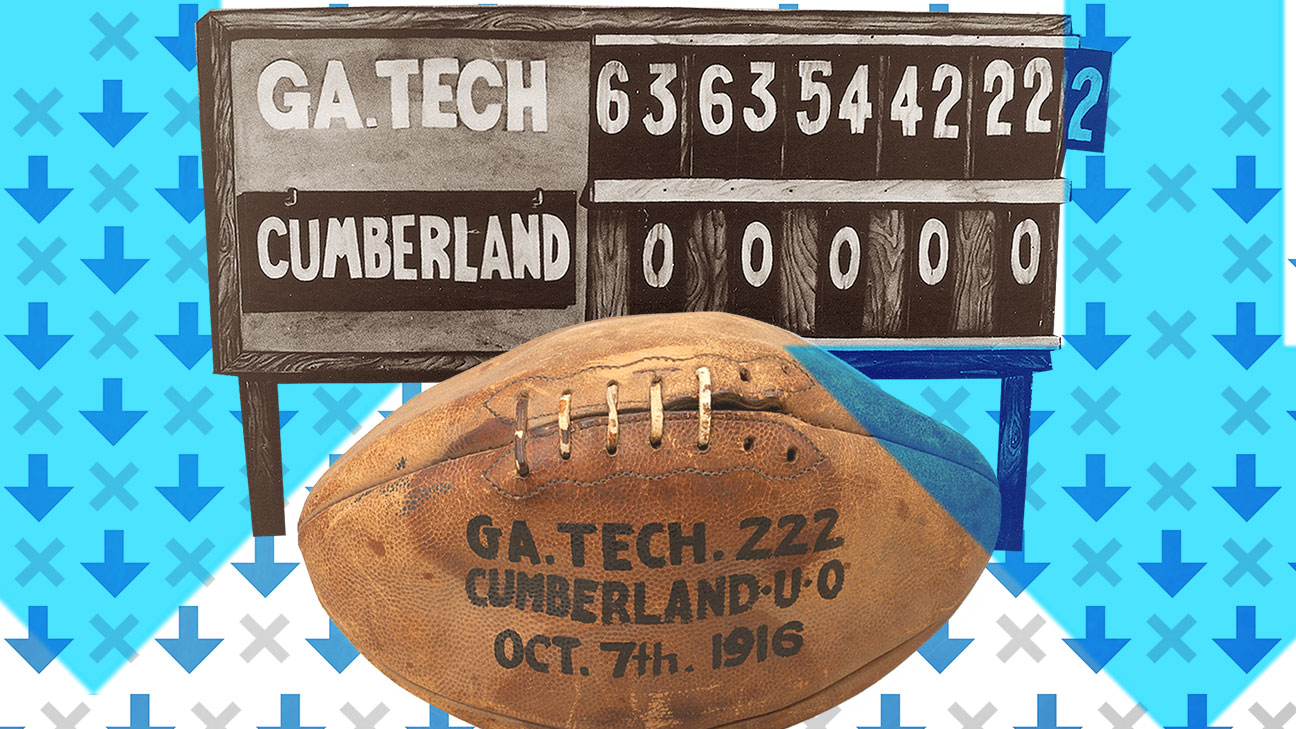 Bottom 10 Inspirational thought of the week:

Unforgettable, that's what you are


Unforgettable though near or far

Like a song of love that clings to me

How the thought of you does things to me

Never before has someone been more

Unforgettable in every way

Here at Bottom 10 Headquarters, located in the custodial closet off the men's room at the College Football Hall of Fame, we have thoroughly enjoyed the depth and breadth of this year's CFB150 celebration.

Yet while we have appreciated the images, stories and moments created by the legendary players, teams and games, we can't help but obsess over what HAS been missing. Where are the fumbles in crucial moments? Where are the ugly uniforms, dropped passes, terrible third-and-long playcalls and coaches with the "Where am I?" looks on their faces?

In other words, where are our people?

The Rose Bowl? Notre Dame? Hail Flutie? Herschel? That's such low-hanging fruit. To find who and what we're looking for at the Bottom 10, it takes digging. Like, you're-gonna-get-dirty digging. Like, seriously, man, I'm getting out the Bush Hog and a Roto-Rooter, and if we hit a sewer line and it spews all over us, whatever. I don't care because we ain't stopping until we find what we're looking for. That kind of digging.

We've been dredging like that all season, through hard drives and cabinets full of yellowed newspaper clippings and at least two cardboard file boxes that were the final resting places of a nest of mice and Charlie Weis' last contract from Kansas.

Why endure that? Because we love misery and because we realized that this week's Bottom 10 was going to drop on the exact 150th birthdate of college football, commemorating Nov. 6, 1869, when Princeton visited an old Bottom 10 friend, the In-A-Rutgers Scarlet Knights. That means that instead of posting our regular, run-over-by-the-mill weekly Bottom 10 rankings, we're going bigger by going even more bottomer.

With apologies to William J. Leggett and Steve Harvey, here's the CFB150 All-Time Bottom 10 Teams of All Time.

We don't normally include FCS programs here in the Bottom 10, but the '91 Panthers are so legendarily bad that they burst through such barriers like the Kool-Aid Man. After being shuttered for one season to deal with a financial scandal involving its former head coach, Prairie View returned to the field in '91 and lost with the kind of panache that assaults the very fabric of mathematics. The Panthers scored 48 points all season while surrendering an average of 56 points per game. They were outscored 617-48, including a 92-0 loss to Alabama State that was 72-0 at the half. It was the start of a seven-year losing streak that finally ended in 1999 at 80 games, dwarfing the all-levels collegiate mark previously thought unbreakable, a 50-loss streak set in 1980 by NCAA Division III's Macalester College. Go Scots!

There are so many sorry seasons to choose from the annals of the Big Ten's smallest school, from Ara Parseghian's 0-9 1957 team to this year's shockingly bad squad that has flirted with our most recent Bottom 10. But those teams didn't make history. The '81 team did. Between 1979 and '82, the Wildcats set the major college record for consecutive losses, with 34. The pinnacle of that futility came in the second half of the '81 season, when a 61-14 loss to Michigan State moved Northwestern into sole possession of the longest losing streak, then at 0-29. The home crowd (I'm using that term very loosely) celebrated witnessing history by storming the field, tearing down the goalposts and chanting "We're the worst!" They must have been students from Northwestern's legendary journalism school, because that statement was extremely accurate.

Columbia was slogging through a 12-game losing streak when it hired head coach Jim Garrett in '85, who showed up wearing blue coach's shorts, a blue T-shirt with "COACH" emblazoned across the chest and the personality of a bag of drywall nails. In his first game, the Lions held a 17-0 lead over Harvard in the third quarter ... and then surrendered 49 points in 22 minutes. Afterward, Garrett unleashed a tirade to The New York Times in which he wholly blamed the punter for the loss and said that punter had been kicked off the team. After finishing the year 0-10, Garrett was fired amid -- shocker -- allegations of verbal and physical abuse. The team lost its next 22 games, completing a 44-game slide. The Lions set an unofficial record for positive embracement of futility when the band started playing the Mickey Mouse Club theme song and saw the playing of the official fight song banned because they kept replacing the lyrics "Roar, Lion, Roar, and wake the echoes of the Hudson Valley" with "We always lose, lose, lose, by a lot and sometimes by a little." Losing became such a fabric of Columbia life that when success came, fans couldn't handle it. In 2017, after a 6-0 start, the Times ran a story under the headline "Columbia Football Keeps Winning. Some Fans Aren't Happy About It."

Trying to choose the best worst season in Kansas State history is like asking one to choose their favorite kid ... if someone has a house full of pitifully ugly kids. The Wildcats have posted seven winless seasons in all, but the worst was right smack in the middle of a 28-game losing streak that ran from 1944 to '48. The '46 team was outscored 233-41, never topping seven points in any game. Sure, it lost big to Oklahoma and Nebraska, but it was also housed by San Francisco and Hardin-Simmons. The following year, the Wildcats went 0-10. In '48, they ended the streak and won at Mizzou ... then lost 46 of their next 51 games. Their last great run of futility came in 1987-88, when they went 0-21-1 in the final two years before hiring Bill Snyder as head coach. Snyder had to have walked on water to his KSU job interview, and then he turned that water into wine while healing a blind man during that interview because what he did in Little Apple after getting the job was the college football miracle of miracles.

The CFB150 Coveted Fifth Spot goes to a team that played only one game, and that team wasn't actually a team at all. Following the 1915 season, Cumberland College of Lebanon, Tennessee, shuttered its football program, but it had already signed a deal to play Georgia Tech in 1916. When the time came for that game, Tech head coach John Heisman (yes, that Heisman) demanded that Cumberland either send a squad in Atlanta or pay the $3,000 ($70,667 in 2019) penalty. George Allen, the former football student manager, recruited a bunch of his fraternity brothers, and they traveled to Atlanta to play some ball. They lost 222-0, the biggest beatdown in college football history and perhaps the biggest in the history of sports. "My career coaching record was 0-1," said Allen, who went on to become a confidant of FDR, Truman and Eisenhower. "But I still managed to make history."

The Hoos matched Kansas State's 0-28 slide with a brutally bad ACC effort -- still a conference record -- from 1958 to '60. The '58 team won only once, and the '60 team went winless, but the '59 team went winless more spectacularly, outscored 393-80 with an average margin of 31 points per game. It became so bad that the ghost of Thomas Jefferson appeared in the office of head coach Dick Voris and said, "Never put off until tomorrow what you can do today ... like run the damn ball, Dick!"

Our lone representative from college football's 19th-century days, the Stevens Institute of Technology was founded in 1870 in Hoboken, New Jersey, a few months and only 35 miles removed from the inaugural college football contest at Rutgers. In 1873, Stevens was one of the five schools (along with Rutgers, Princeton, Columbia and Yale) invited to establish the original set of collegiate football rules. In '86, the Ducks were outscored 294-6, including a pair of losses to Princeton 58-0 and 61-6. They did tie Lehigh 0-0 but then lost to them 14-0 the next game. The Ducks actually finished 13th out of the nation's 14 teams in '86, worsted by the 0-9 Tufts Jumbos. But in '87, they went 0-6-1 to finish last among 15 teams, including a loss to something called the Active Football Club. In 1924, Stevens shut down the program, becoming the Inactive Football Club.

J.B. "Ears" Whitworth (no, not the 877-CASH-NOW guy), aka the Last Guy Who Coached Bama Before Bear, walked into a brutal schedule that included four top-13 teams in his first season at the helm in Tuscaloosa. He limped out with an 0-10 record, one of only three winless seasons in the history of the Crimson Tide and the only one in the 20th century. Every loss was by 15 or more points. In a precursor to today's "change the culture" mantra, Ears tried to kick-start a youth infusion by benching all of his seniors. As a result, future Pro Football Hall of Famer Bart Starr, who spurned Bryant at Kentucky to stay home and play for the Tide, threw for 587 yards and one TD ... on the season. I like to envision someone driving to Memphis and walking up to an infant Paul Finebaum, who was born that July (but still has the same haircut today), and screaming into the baby's face, "Bama ain't played nobody, Pawl! As in, they don't let nobody play!"

The Cowboys were coached by John Corbett, aka the Grand Old Man of Athletics (no, not the guy from "My Big Fat Greek Wedding" and "Sex and the City") and a former Harvard halfback who was a member of the second All-American team. Corbett's team was outscored 265-16, including five shutouts. But what officially landed the team on this list was the fourth of those defeats, a 14-0 loss to the University of Wyoming faculty. Local papers reported that an English literature professor wearing an ascot high-stepped over the goal line like Deion Sanders and blew pipe smoke into a Wyoming player's face as he danced the Charleston in the end zone and yelled, "Thine hath been schooled!" OK, that didn't actually happen, but it would've been awesome if it had.

Is this one of the 10 worst teams of all time? Probably not. But it's hard to recall a team that was as unexpectedly terrible as George O'Leary's last squad. In 2013, the Golden Knights went 12-1, won the Fiesta Bowl and finished the season ranked 10th. In 2014, UCF was 9-4 and 7-1 in the still-new American Athletic Conference of America. In 2015, they were picked to finished fourth in that conference and even received a first-place vote. Instead, they won zero games. At 0-6, O'Leary resigned as interim athletic director. At 0-8, he resigned as head football coach. At 0-12, the team edged Kansas, also 0-12, to win the Bottom 10 championship. At season's end, Scott Frost was hired as the head coach, and two years later UCF went 13-0 and declared itself national champion. That's the craziest Central Florida roller coaster since Space Mountain. 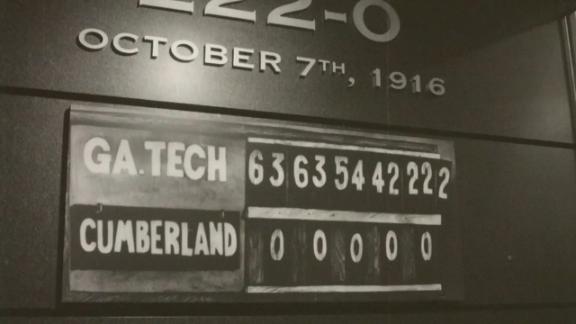