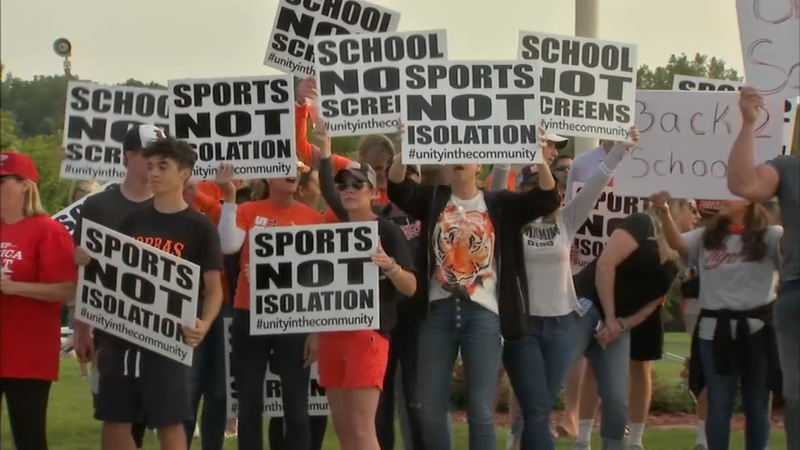 The debate about in-person learning and fall sports has grown in the suburbs recently, with multiple protests being staged in multiple suburbs to demand the return of both, including in Hinsdale.

students and parents gathered on the steps of Hinsdale Central High School Thursday to call on the district to reinstitute in-person learning.

Now administrators at Hinsdale South said a player involved in their football camp tested positive for the virus. In a letter to football families, the principal said the school "will be suspending all football-related activities for 14 days...and requiring all students and staff who participated in the camp to quarantine through September 24."

"Anytime, whether that be a sporting event, a sports team, that be a backyard barbecue or a wedding," said Karen Ayala, executive director of the DuPage County Health Department. "We need to be extra vigilant in making sure we take the precautionary measures, wearing a mask, keeping our distance."

Just last week Hinsdale students and parents rallied for the return of in-person learning and fall sports. Tuesday night, families in Crystal Lake added their voices to the growing debate.

"We are seeing increased depression, anxiety, and even hopelessness in some cases," said Angela Bonneville, Center for Emotional Wellness of the Northwest Suburbs.

"When you say stuff from your heart to them and say how it's personally affected you, then it's going to make a lot bigger change than just us all out here," said Jake Lukasik, Cary-Grove High School student.

Governor JB Pritzker was asked Tuesday about other states, many with higher infection rates, that are allowing high school sports.

"Fine, if they've decided to endanger and children and families in those states by allowing certain contact sports to take place, that's their decision. That's not something that's good for the families, the children of Illinois," Prtizker responded.