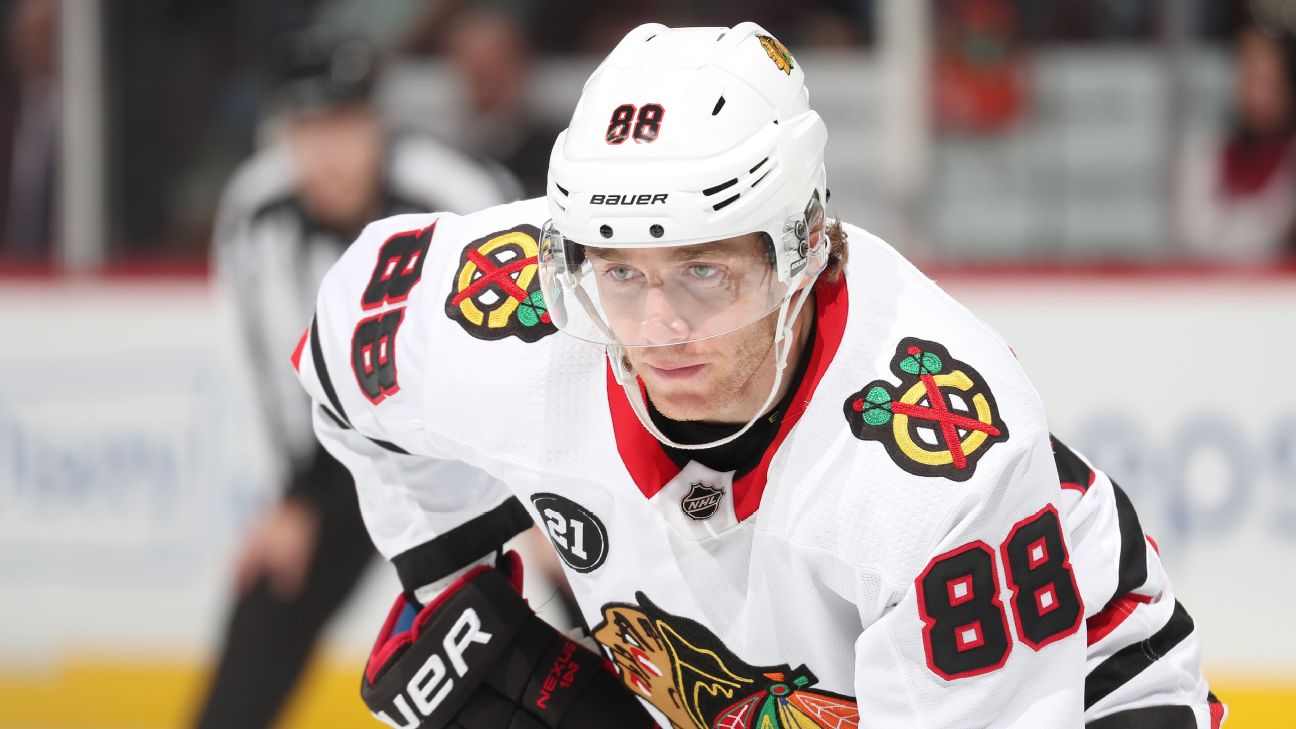 CHICAGO -- At the end of last season, Patrick Kane wasn't happy. The Chicago Blackhawks had missed the playoffs for the first time in a decade. Though the right winger was once again an All-Star, putting up 27 goals and 76 points, it was a drop-off from his 46-goal, 106-point MVP campaign just two years earlier.

As he'd be entering his age-30 season in the fall, with his team at a crossroads, Kane needed to reinvigorate himself. First, he decided to play at the World Championships in Denmark. "I just needed to have something good to head into the summer," he says. (As captain of Team USA, Kane racked up a tournament-leading 20 points and won MVP as the Americans took bronze).

Kane also switched up his routine, and began working with Chicago-based trainer Ian Mack. Kane knew during his first few years with the Blackhawks he had a "youthful energy." But 127 playoff games over nine seasons -- an extra season and a half of hockey -- had taken a toll on his body. Mack promised to start from scratch. The workouts were all body-movement based. They focused on muscle elasticity and getting his body to move in consort. Kane says he started to feel more agile, and a bit quicker.

The biggest change? Kane didn't pick up a weight for months.

"It was totally the opposite of what I was doing last summer," he says. "Then, it was all about weightlifting and trying to get stronger."

The result: Kane's 92 points trail only Nikita Kucherov's league-leading 99. As of this writing, he's on the hottest streak of his career; with 42 points in 19 games (a sizzling 2.2 points per outing), his 19-game point streak is the longest of any NHL player this season.

Kane, who turned 30 in November, is second in the league with 38 goals -- including three overtime winners -- fourth in assists, and doing it all while averaging 22 minutes, 19 seconds of ice time per game, up about 2 minutes from his previous career average of 19:44.

We're entering another golden age for American-born players. Besides Jack Hughes, the projected No. 1 pick of the upcoming draft, all of these players are under the age of 25: Auston Matthews, Jack Eichel, Johnny Gaudreau, brothersMatthew Tkachuk and Brady Tkachuk, Seth Jones, Zach Werenski, Dylan Larkin and Alex DeBrincat. Consider, then, that Kane is by far the most accomplished U.S.-born player in the league right now, and has been building his case to be the greatest American-born player of all time. Brett Hull is the American leader, with 1,391 points in 19 seasons, and Kane is at 920 points nearing the end of his 12th season.

In other words, Kane isn't ready to hand it over to the next generation just yet.

"I'm playing a lot more, but I feel pretty fresh every night," Kane says. "I honestly think I feel better now than I did in my 20s. I really do."

Last season's dismal 76-point performance, which sunk Chicago to the bottom of the Central Division, should have marked the end of the dynasty. It signaled the Blackhawks were entering salary-cap purgatory, compounded by goalie Corey Crawford missing the final 47 games because of a concussion, and championship stalwarts Duncan Keith, Brent Seabrook and Brandon Saad each showing signs of regression. Kane and captain Jonathan Toews would likely toil away on irrelevant teams as the franchise slowly restocked.

"I'd like to think that won't be the situation," Kane says. "But if it is, I don't know if I'd be satisfied by that. Even if I had personal success, you don't really enjoy it if the team isn't winning."

The Blackhawks fired coach Joel Quenneville, the second-winningest coach in NHL history, on Nov. 6, and replaced him with then-33-year-old Jeremy Colliton; for a league obsessed with youth, this felt like the Blackhawks making an overt effort to reach their Generation Z players. For a veteran like Kane, it was met with incredulity.

"Especially when you hear Joel was fired, a lot of us were shocked, maybe pissed off," Kane says. "Jeremy doesn't really have a ton of experience coaching. He did a couple years in Sweden, one year in Rockford, so there's always a little skepticism. But where we're at now, we have a lot of belief in him."

It helps that after a feeling-out period, the Blackhawks began winning; since Jan. 20, they have 10 wins, trailing only the St. Louis Blues for most in the NHL during that span. A team we wrote off for dead only months ago has re-emerged into the playoff picture.

Kane describes this season as "weird." He (and the team) started off hot, but he says he "went into a lull for like 18, 20 games after Joel got fired, I personally wasn't playing very well."

Then he started picking things up, the power play began clicking (it is hitting at a 35 percent rate since Jan. 1, the best mark in the league) and the wins piled on. While this should be a last hurrah for Kane, Toews, Keith, Seabrook, et al, the team has been bolstered by players like DeBrincat (33 goals in 61 games) and Dylan Strome, the No. 3 pick in 2015 who stalled in Arizona but has been nearly a point-per-game player since being acquired in late November. If the Blackhawks do indeed make the playoffs, it's not as if Kane hasn't been part of a miraculous rise before. In today's NHL, where parity reigns, perhaps it makes sense that a team doesn't need to commit to a full rebuild, but rather retool on the fly.

Kane says once he began hearing Colliton talk about his vision for the team, he was all-in.

"His communication is unbelievable," Kane says. "He checks in on you every day. Every day. It's a lot different. Joel was just a presence. He would talk to us, but it was more, 'Go out and play and do your thing.' With Jeremy, he always wants to know what you're thinking, which I think is pretty cool. He's got a great demeanor, too. He's calm when things aren't going well, he's enthusiastic, and to the point."

Kane's production is not linemate-dependent, which has been a curse at times. The Blackhawks feel they can shuffle things around him, which often means parting with players with whom he develops chemistry, like Nick Schmaltz earlier this season, or Artemi Panarin, his primary linemate during the 2015-16 MVP season. (Lately, Colliton has been toying with having Kane and Toews play together for stretches).

It's clear Kane still harbors good feelings toward Panarin that are rooted in nostalgia. When the Blackhawks visited Panarin's Columbus Blue Jackets in October, Panarin asked for Kane to come say hello before dinner. They spent about a half hour catching up, then Panarin pulled out a gift, what Kane describes as a "pretty nice watch."

"He said it was for everything I did for him in the two years he was here, getting bonuses and stuff," Kane says. "It was really cool. It took me back a little bit because it was such a nice gesture."

Panarin, of course, becomes an unrestricted free agent this summer. Kane isn't necessarily advocating for a reunion, but it's clear he's hoping management doesn't see this as a one- or two-year rebuild, but rather maximizing the final window that he and Toews have left.

"It seems like we have some really good prospects that are coming up and could help us," Kane says. "And who knows what will happen in free agency? Maybe we'll sign someone big next year and we'll be right back at it next season."

In the meantime, Kane has been doing his part to manage perception of his team; though the team never saw a true dip in attendance, fans have been impatient after being accustomed to success. When rumors swirled about Seabrook being asked to waive his no-move clause, it was Kane who offered an impassioned public defense in hopes to silence some fans. ("I think people want to get on Seabs about his contract, but to us, he's underpaid [for] what he brings in this locker room," Kane told reporters, sternly).

Says Kane now: "Sometimes fans and media are not that far off, but sometimes it's far-fetched to read what they think, and put it together and make it realistic. If the team is not playing well, they want all these moves to be made, and it's just not realistic. You understand the passion, that's the great thing about being in Chicago and playing for a great organization and a great sports city. They're passionate and they want the team to win -- and trust me, we do, too."

As Kane enters his 30s, he is more keenly aware of his body and what it will take for him to stay elite for as long as he'd like to. He says he has been more conscious of his nutrition over the past few seasons -- he much prefers his girlfriend's home-cooked dinners these days over restaurants -- and monitors his sleep. He likes to get nine hours per night for optimal performance. If he has to wake up at 8:30 a.m., for instance, he'll try to be in bed by 11. On an off day, when he used to be fine just sitting on the couch, Kane is deliberate about making sure he does at least something active.

At the All-Star Game, Kane chatted withWinnipeg Jets center Mark Scheifele, whom he had never really met before. Scheifele has a reputation around the league as the ultimate hockey nerd who is constantly evolving his regimens on diet and nutrition. "We were talking about how he read the Tom Brady book, and how he does a lot of the things Tom does in terms of nutrition and exercise, muscle pliability, stuff like that," Kane says. "It can go a long way to really extend your career."

As the season has gone on, Kane has noticed another thing about himself. He's a bit more optimistic.

"In the past, if I played well, it would be like, 'Well I know this is going to end soon, when is that going to happen?'" he says. "Now it's like, 'I'm playing well, things are good, OK why can't it keep going like this?'"