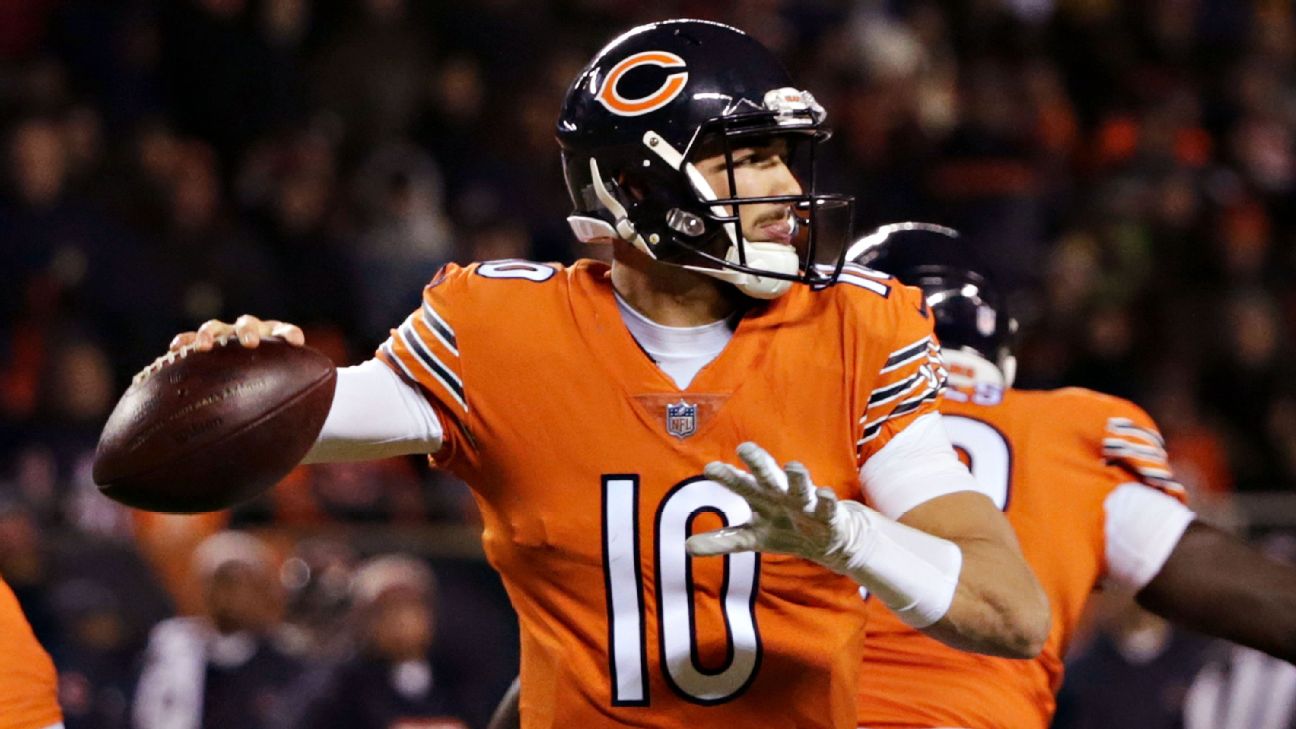 Chicago is officially calling Trubisky, 24, "day-to-day" after the quarterback injured his throwing shoulder on a late hit by Minnesota safety Harrison Smith near the end of the fourth quarter in last Sunday night's 25-20 victory over the Vikings.

"What's my sense [on whether Trubisky plays on Thanksgiving]? I'm saying cautiously optimistic but I can't make any promises," Nagy said. "I hope he does. But it's a day-to-day thing for us, like I said. He wants to play. I know that. And for us, we got to make sure in these situations that we're doing the right thing."

Trubisky did not practice on Tuesday.

Chicago will become the first team since the 1970 merger to play a Sunday night game followed by a Thursday day game, which further complicates Trubisky's predicament.

"The fact that you don't have more time can affect our decision a little bit, but again, every injury's a little bit different, so I'm just going to rely on our training staff and on Mitch," Nagy said.

Over Chicago's past six games, Trubisky has 2,832 yards of total offense and has accounted for 23 touchdowns to go along with three two-point conversions. Trubisky had arguably one of the best games of his young career against the Lions two weeks ago when he completed 23 of 30 pass attempts for 355 yards, three touchdowns, zero interceptions and a rushing touchdown.

In the event that Trubisky is sidelined, the Bears will start veteran backup Chase Daniel, who signed a two-year deal with Chicago that included $7 million in guaranteed money in the offseason. Prior to joining the Bears, Daniel played under Nagy for three seasons in Kansas City. Nagy served as the Chiefs' quarterbacks coach and offensive coordinator before accepting the Bears' top job in January.

"I haven't gotten any reps with the first team this year, but it's the same offense that I was in for five years, so for me, it's mostly the same plays," Daniel said. "We've got some tweaks here and there and obviously different personnel, but I know the offense like the back of my hand."

Added Nagy: "I know Chase inside out; he knows me inside out. If that's the route we go, we keep plugging away and that's just part of football. If not, then it's nice to know we've got Chase."

The Bears are scheduled to report to the team facility on Wednesday for meetings and a light walk-through before departing for Detroit.