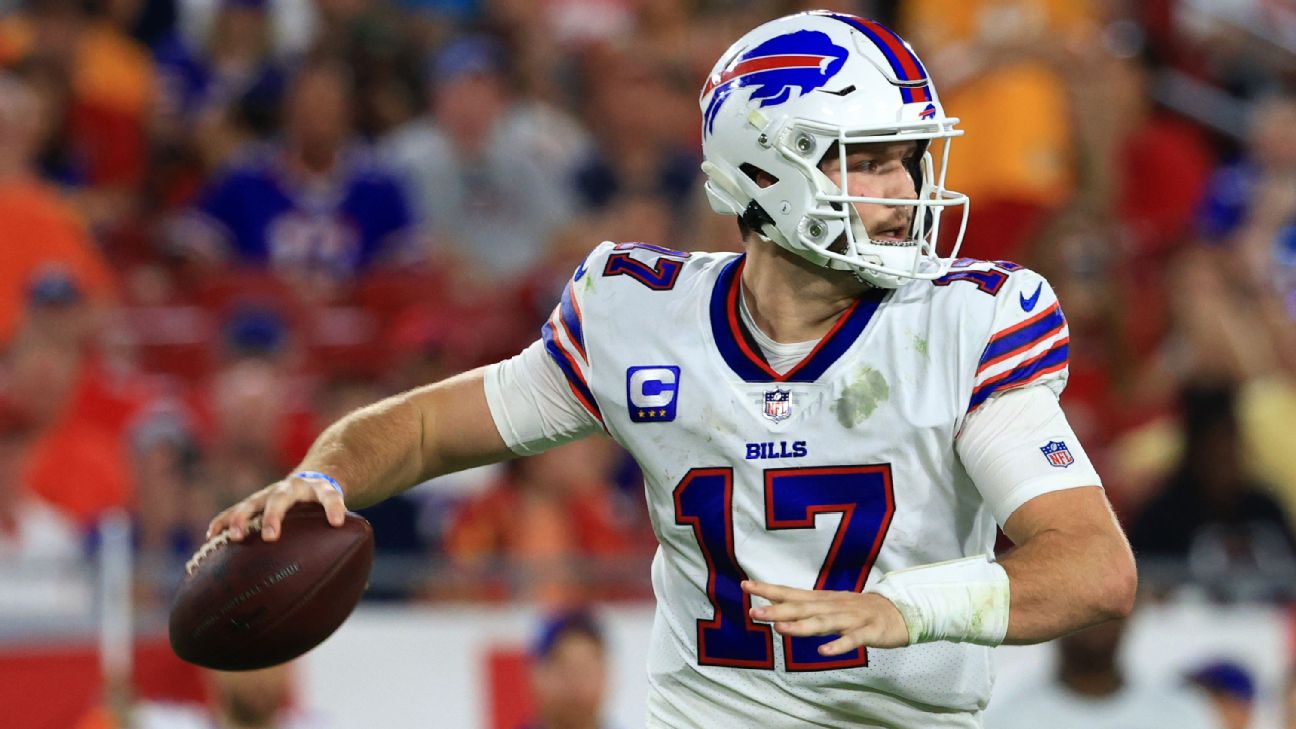 Week 15 of the NFL season has four consecutive days of action as teams attempt to emerge in the playoff picture, but notable injuries could hamper those efforts.

Several teams across the league are facing COVID-19 outbreaks, causing their injury reports to be rather lengthy and sparking a negotiation between the NFL and NFLPA about the league's COVID-19 protocols.

Elsewhere, a few teams are dealing with banged-up quarterbacks. Baltimore Ravens QBLamar Jackson has missed only two games in his four-year career, but his status for Sunday remained undecidedbecause of an ankle sprain that kept him out of practice this week. Jalen Hurts is also nursing an ankle injury that has his availability for thePhiladelphia Eagles unknown. Buffalo Bills quarterback Josh Allen injured his left foot Sunday but is now set to start, according to Bills coach Sean McDermott.

Our NFL reporters have the latest injury updates and developments surrounding players around the league.

Fowler, Atlanta's leader in sacks (4.5) and forced fumbles (three), is questionable for Sunday against San Francisco after suffering a calf injury late last week against Carolina. Fowler has been the Falcons' most explosive edge rusher this season when he's played -- he missed three games earlier this year because of a hyperextended knee -- and without him, Atlanta has issues with its pass rush. If Fowler can't play in a critical game for a potential playoff berth, look for a combination of Adetokunbo Ogundeji, James Vaughters, Brandon Copeland, Steven Means and John Cominsky to take his snaps. Fowler is the Falcons' only edge rusher on the roster with more than one sack this season. -- Michael Rothstein

Jackson has never missed a game because of injury, but that streak is in serious jeopardy. This is the first time Jackson has been sidelined an entire week because of an injury. It could be risky to play Jackson if his mobility is limited. The Ravens have allowed the most sacks (47) in the NFL If Jackson can't play, Tyler Huntley would make his second career start.. -- Jamison Hensley

Dawkins, the starting left tackle, tested positive for COVID-19 on Friday morning. The team has not ruled him out for Sunday's game, but if he was to miss it, Dawkins' absence would just be the latest in the Bills' offensive line shuffling this season. Multiple players have missed time because of injuries and time spent on the COVID-19 list. Dawkins' availability is important for the offense as that unit goes up against Panthers pass-rushers Brian Burns and Haason Reddick, part of the league's No. 1 pass defense.

Sanders is expected to miss this week's game against the Panthers because of a knee sprain. He is officially listed as doubtful. Sanders suffered the injury in last week's overtime loss to the Tampa Bay Buccaneers. Wide receiver Gabriel Davis is expected to see increased snaps in Sanders' absence. Davis has a touchdown in each of the past two games. -- Alaina Getzenberg

Hicks, who has not played since Week 9 while nursing an ankle injury, has been a full participant in practice all week and is on pace to play on Monday night.

The Bears have 13 players, including wide receiverAllen Robinson IIand starting right tackle Larry Borom, and all three coordinators on the reserve/COVID-19 list. Seven of the eight players who popped up on the first injury report of the week with a non-COVID-19-related illness returned on Friday.-- Courtney Cronin

Pollard did not practice all week because of a partially torn plantar fascia and said he would be a game-time decision. His pregame warm-up will be telling, and with Ezekiel Elliott dealing with a knee injury, the Cowboys' running game could be hurt badly. It is possible Ito Smith could be called up from the practice squad as insurance with Corey Clement as the only healthy runner on the active roster. If Pollard plays, he could be limited as a kick returner, and Cedrick Wilson could get some time there as well.-- Todd Archer

Williams did not practice on Thursday because of swelling in his left knee. The Broncos were hopeful Williams, who leads the team in rushing with 743 yards and is fourth on the team in catches (34), would be able to practice Friday. He did, in fact, practice Friday and looked good enough that Broncos coach Vic Fangio said Williams would have no restrictions in Sunday's game against the Bengals. -- Jeff Legwold

Detroit's most dynamic offensive threat didn't practice again all week and will miss his third consecutive game because of a shoulder sprain. He was hurt during Detroit's 16-14 Thanksgiving Day loss to the Chicago Bears, and the Lions are being cautious with their top back.

Lions coach Dan Campbell confirmed that Hockenson underwent thumb surgery Thursday morning and will miss the remainder of the season. He suffered the injury during Detroit's lone victory this season, over the Minnesota Vikings on Dec. 5, in which he caught four passes for 49 yards and a touchdown. "We'll miss him," Campbell said. "Everything went well, though."-- Eric Woodyard

Reid is still in the concussion protocol and will not play against the Jacksonville Jaguars. Coach David Culley pointed to safeties Eric Murray and Jonathan Owens as two players he expects to step up in Reid's absence. -- Sarah Barshop

The Pro Bowler will miss his third straight game since going down in the first half on Thanksgiving. Slot receiver Hunter Renfrow has picked up the slack, with aplomb. That should continue with weather a factor in Cleveland and the Raiders relying on short and intermediate passes. Renfrow's targets have gone from nine to 10 to 14 in the games since Waller went down. -- Paul Gutierrez

Thielen did not practice on Thursday and Friday, and Vikings offensive coordinator Klint Kubiak said the team might make a game-time decision Monday about whether he'll play.

Darrisaw has been limited all week because of an ankle injury, and he could be in line to return to the lineup after not playing since Week 12.

Kendricks' status was upgraded from not practicing to being limited on Friday.-- Courtney Cronin

Harris didn't finish the team's Dec. 6 win over the Bills, then spent the team's bye week at the facility rehabbing. He has been limited throughout the week of practice, and the team ruled him out for Sunday's game.Rhamondre Stevenson would become the primary running back in Harris' absence, especially with reserve J.J. Taylor on the reserve/COVID-19 list. -- Mike Reiss

After missing three games with an ankle sprain, Carter will have a "significant role" Sunday against the Dolphins, according to coach Robert Saleh. Carter will be part of a three-man rotation, but he probably will get the most snaps. -- Rich Cimini

Hurts participated in full at Friday's practice after a successful evaluation workout earlier in the day. Coach Nick Sirianni used the words "hopeful" and "excited" in respect to Hurts' health and prospects for playing Sunday. He appears on track to play, especially with the Washington game being pushed to Tuesday night. -- Tim McManus

Mitchell remained in concussion protocol all week after missing last week's game in Cincinnati. He's also still dealing with knee pain. He did not practice and has again been ruled out for Sunday's game against Atlanta. Without Mitchell, the Niners will again lean on a group led by Jeff Wilson Jr., JaMycal Hasty and receiver Deebo Samuel to get the bulk of the carries. -- Nick Wagoner

Washington coach Ron Rivera said Friday afternoon that he was optimistic about McLaurin's chances -- even if the game vs. the Eagles had remained on Sunday. That would be a huge boost for an offense likely to be without starting quarterback Taylor Heinicke. McLaurin was running routes in red zone work on Friday, a clear sign he is expected to play.

McKissic has missed the past two games with a concussion and was listed as questionable when the game was going to be on Sunday. Realistically, he was more likely to miss than to play. But the change to Tuesday means McKissic has a better shot at playing. That would be a huge boost for an offense that lacks a lot of weapons. He's an excellent threat out of the backfield, but also a strong pass protector. -- John Keim 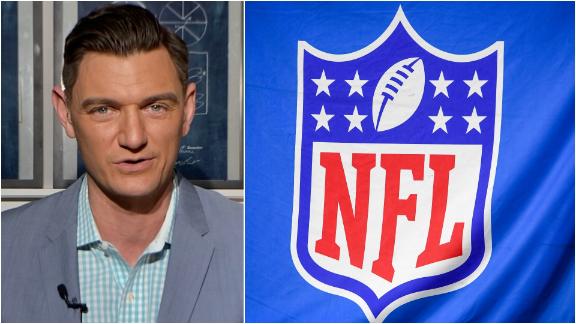