WLS
1 / 18
A status board with "0" attendance is shown inside the press box at Oriole Park at Camden Yards on April 29, 2015.
AP Photo/Daniel Gelston
CHICAGO -- The public address announcer at Camden Yards announced the playing of National Anthem, informing "ladies and gentlemen" what was to follow.

A recorded version was played while the White Sox stood in a line outside their dugout and the Orioles stood at attention in their dugout.

A custom in Baltimore is shouting "O!" when the song reaches "Oh say can you see?"

No one did it, although one person in the press box carried on the tradition by saying it under his breath.

At the time, the only people in the stands were a couple of scouts behind the plate.

With media buzzing over the deserted game, Camden Yards may as well have been setting up for a playoff game, with all 92 seats in the press box full. TV camera crews lined the field and are stationed outside the ballpark.

But the grandstands are as vacant as they are in the offseason.

The usually teeming concourse was barren and the concession stands selling $15 crabcakes, $6.50 crab soups and $8 canned beers were locked up.

And those signs cautioning fans to "Watch Out for Batted Balls" were pointless for a day.

Managers of the Tampa Bay Rays and New York Yankees say players in a closed-door game in Baltimore will have to adjust from their usual habits of feeding off a crowd.

Said Girardi: "This is going back to the days where just your parents showed up on a cold day."

The lineup board in the Orioles' clubhouse says it all: In the attendance section there's a round "0'' in orange marker. Just beneath it under "total attendance" the number read 299,598, an average of nearly 33,300 fans through nine games.

Cash, whose team was visiting the Yankees in New York, said teams "sometimes feed off the opposing crowd when you're going in an opposing city." 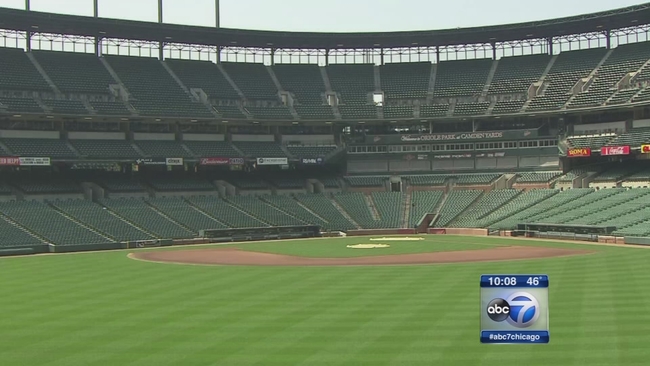