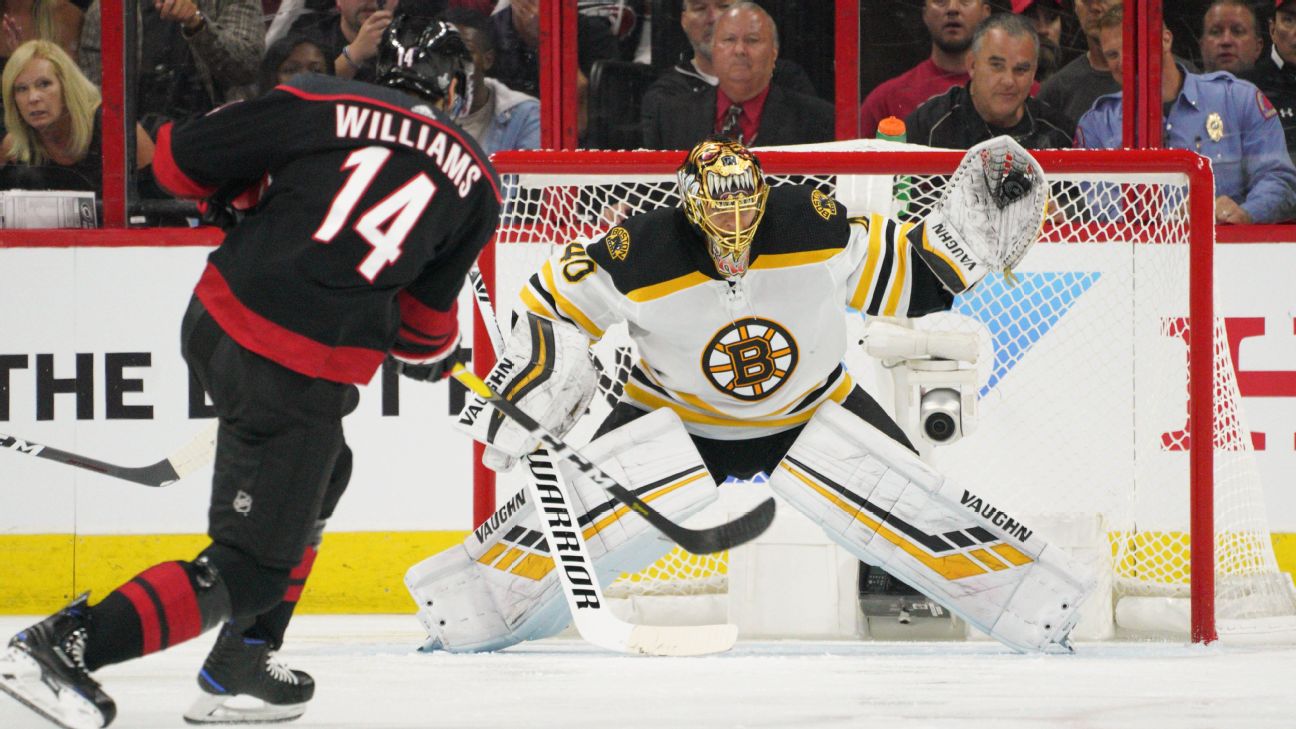 ESPN
By Emily Kaplan
RALEIGH, N.C. -- The Boston Bruins are in the Stanley Cup Final, which means the Tuukka Rask redemption tour continues.

The Bruins goaltender has been spectacular in the Bruins' postseason run, including a 24-save shutout in Game 4 of the Eastern Conference finals on Thursday to knock out the Carolina Hurricanes in a sweep.

Rask had a .956 save percentage in the series and improved to 3-0 with a .990 save percentage (95 saves on 96 shots) in games this postseason with a chance to eliminate opponents.

"I don't have the words for it," teammate Charlie McAvoy said. "I sat on the bench tonight, I would see a Grade A [chance] and just shake my head of how easy he made it look, making some of those saves. He's unbelievable. I've always had that belief in him and I know everyone else in our room has."

Though the Bruins are confident in the 32-year-old Finn, Rask has always been polarizing among Boston fans. It began in 2010, when he was in net when the team blew a 3-0 series lead against the Philadelphia Flyers in the second round. Rask had a great chance to lead the Bruins to a championship again in 2013, but Boston lost in the Stanley Cup Final to the Chicago Blackhawks.

Despite winning the Vezina Trophy in 2014 as the league's top goaltender, Rask always seemed to have skeptics in Boston.

Boston's coach, Bruce Cassidy, offered a passionate defense of Rask after he knocked out the Toronto Maple Leafs in Game 7 of the first round by stopping 32 of 33 shots. "I think you have to, as a fan, acknowledge when a player plays well," Cassidy said then. "I know in this town when you don't, you hear about it -- that's fine too. But tonight he played well and hopefully the people get behind him."

Cassidy and the Bruins continued to praise Rask this spring, including on Thursday.

"I don't know if I can say more [that hasn't been said]," veteran forward David Backes said, "It's great to have him behind us, to know that if mistakes do get made in front of us, he'll bail us out. He's been our backbone. Phenomenal. Your best penalty killer is often your goalie, and he's been that."

The Bruins were especially impressive stymieing Carolina's power play in the series, limiting them to just one power play goal on 14 opportunities. But all series the plucky Hurricanes couldn't keep up with the high-powered Bruins and their red-hot goaltender. After being outscored 11-4 in the two opening games, Carolina captain Justin Williams said his team needed to "eat a poop sandwich" and "chew on it for a little bit" to get the bad taste out, and start over.

Carolina came out storming in Game 3, including 20 shots on goal, 33 shot attempts and a 46-second 5-on-3 in the first period alone. According to Natural Stat Trick, the Canes had a 2.49 expected goals in the first period, but they ended up with zero -- thanks to Rask.

When asked how the team seemed to be getting stronger as the postseason went on, Cassidy said: "Tuukka has been very consistent. Usually if you're going to get on a roll, your goaltender has got to be there for you."
Report a correction or typo
Related topics:
sportsespnchicago blackhawkstuukka rasknhlboston bruins
Copyright © 2020 ESPN Internet Ventures. All rights reserved.
More Videos
From CNN Newsource affiliates
TOP STORIES