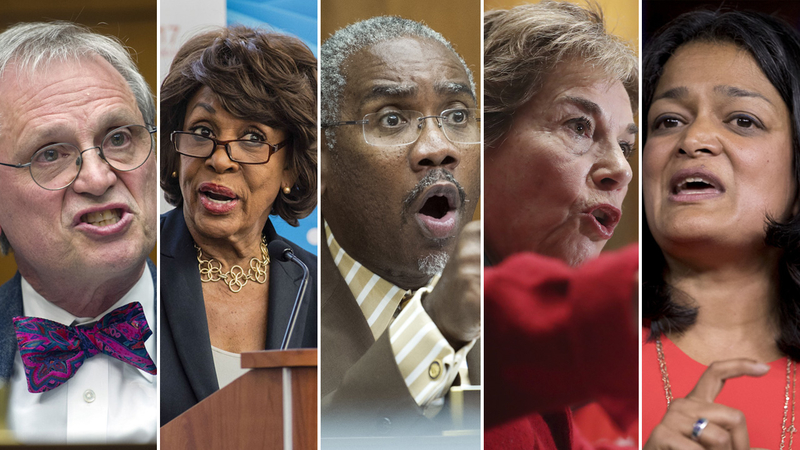 WASHINGTON -- A growing list of Democratic lawmakers have said they will not attend President Donald Trump's first State of the Union address on Tuesday.

ANNOUNCEMENT: With all the racism coming from the White House, I will NOT be attending @realDonaldTrump's State of the Union.

Instead, we'll focus on the State of OUR Union, our opposition to his agenda, and we will lift up a progressive and inclusive vision of our country. pic.twitter.com/dcAWMIkZZV

Jayapal said those boycotting the event will hold their own State of Our Union address "to talk about our opposition to these racist policies that are being put out of the White House and to make sure that we put forward our own progressive vision of what our America looks like."

Rep. Gregory Meeks, D-NY, joined his boycotting colleagues Sunday, saying he would not attend after Trump was critical of rapper Jay-Z's comments about the impact that Trump's alleged 's---hole' comment had on black Americans.

I just announced on #PoliticsNation that I will NOT attend the State of the Union. Instead, I’ll monitor this President from my office. His current comments about black unemployment, which remains unacceptably high, is just another sign that he doesn’t get it.

"His current comments about black unemployment, which remains unacceptably high, is just another sign that he doesn't get it," Meeks tweeted.

Rather than listening to another destructive, divisive speech by Trump, I will not attend this year’s annual address to Congress. Instead, like I did during his inauguration, I'll be working at home listening to Oregonians about what they think about the State of the Union! #SOTU

"Trump's disastrous policies have destroyed lives and impact real people who call our country home. We can't let Aldo down," Blumenauer tweeted Sunday. Nearly two dozen of Blumenauer's colleagues who will attend have said they will bring DACA recipients as their invited guests.

Rep. Jan Schakowsky, D-Ill., announced Friday that she would skip the address.

"I refuse to normalize President Donald Trump and his loathsome language and actions. The American people have been subjected to a year of racist, erratic, and divisive behavior from their Commander in Chief, and I refuse to accept that as the new normal," she said in a release.

While not a lawmaker, Supreme Court Justice Ruth Bader Ginsburg will skip the address in favor of a previously scheduled stop on her speaking tour during the court's monthlong break, according to the Associated Press.

This is a running list that will be updated.
Report a correction or typo
Related topics:
politicswashington d.c.protestu.s. & worldpresident donald trumpboycottstate of the union
Copyright © 2022 WLS-TV. All Rights Reserved.
STATE OF THE UNION
You can now order 3rd round of free at-home COVID-19 tests
You can now order another round of free at-home COVID-19 tests
You can order another round of free at-home Covid-19 tests next week
White House releases new, closer-to-normal COVID pandemic plan for US
TOP STORIES
Official admits police made 'wrong decision' in TX shooting
Shocking video shows gunmen firing dozens of shots near Cabrini Green
3 charged in Skokie murder, attempted murder of 2 young boys
South Side shooting at bus terminal could have been 'massacre': judge
Mother accused of killing daughter over 'taking her dad's side': cops
Timeline breaks down Uvalde school massacre
Texas survivor apologized to dad for blood on clothes, losing glasses
Show More
Chicago area officials urge use of masks over Memorial Day weekend
Illinois reports 5,659 new coronavirus cases, 8 deaths
Chicago man faces Capitol attack charges
CPD cop accused of falsely arresting woman cleaning up looted store
4th grader 'did what she had to to survive' Uvalde shooting, aunt says
More TOP STORIES News