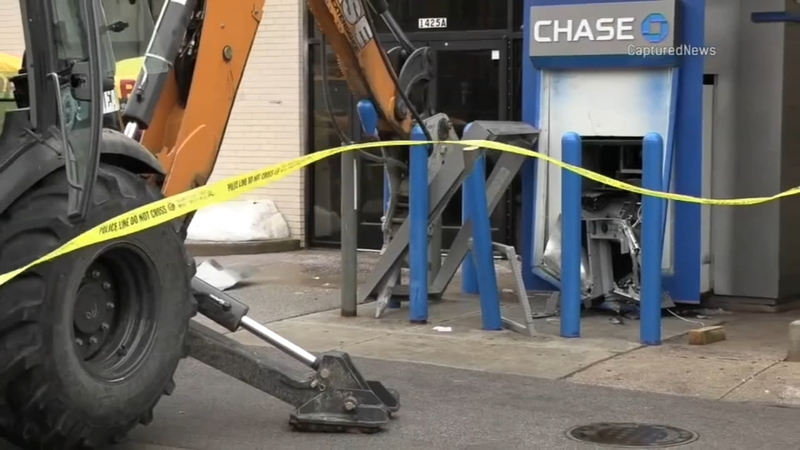 CHICAGO (WLS) -- A big piece of construction equipment was used to break into an ATM on the North Side Friday morning, Chicago police said.

Police said a person stole a backhoe from a construction site on the South Side at Constance and 90th, more than 20 miles away. The thieves then drove it all the way to the 1400-block of West Morse Avenue and used it to destroy a Chase ATM.

"When I came and I saw it I was like, 'Oh my God, this is crazy,'" said Marshall Jenkins, who manages a nearby laundromat.

The backhoe was then left in a parking lot.

"I basically just came a couple of hours ago to do a withdrawal and I was just surprised when I looked and saw that the ATM looked like somebody tried to take it or break in," said Julius Mercer, ATM customer.

A liquor store near Chase captured the backhoe on surveillance video repeatedly ramming into the ATM.

Surveillance video from a nearby liquore store captured a backhoe being used by thieves to smash an ATM in a store in Rogers Park.

"My neighbors were calling me, 'Marshall you ought to get over here to the laundromat,'" Jenkins said.

The ATM is located just outside of Sudz Wash & Dry, which Jenkins manages.

"How couldn't anybody hear nothing?" Jenkins wondered. "I would've came out this morning, it would've been so many police here if I would've heard it, you know? It seems like it's a little too late of a response. It's been a lot of loud noise at night time, but it's like, why is the response to late?"

Workers later came to remove money out of the ATM. Police have not said whether any money was actually stolen from the ATM.

No one is in custody, police said. Area detectives are investigating.