Streator fire chief climbed into hole himself
By CNN 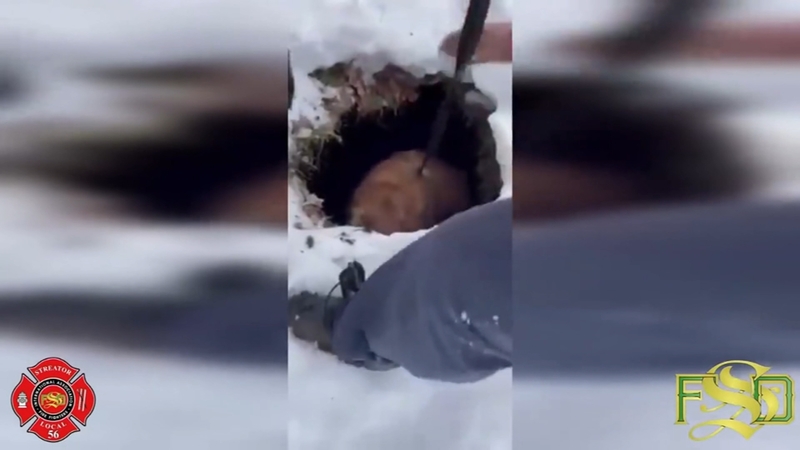 STREATOR, Ill. -- A golden retriever in Streator, Illinois is back home safe with her owner, after an eventful weekend.

She was trapped in a sink hole for nearly a day before being rescued, and it was all caught on camera, WEEK reported.

Firefighters in Streator, which is located in LaSalle and Livingston counties, said a man's morning walk with his dog in a park Saturday soon took a turn, when his dog sensed something was wrong.

After leading his owner to a hole, they found a trapped golden retriever.

"This dog had fell into a 5-foot hole, who has been missing for about 24 hours, from what I understand," Streator Fire Chief Fred McClellan said.

The missing dog is named Macy.

When firefighters arrived, they tried to get Macy out with a ladder, but the older dog couldn't climb it.

McClellan then went into the hole himself, wrapping webbing around her, so the rescue team could pull her out.

It took some maneuvering because of the unsteady ground.

"If you can see me falling. It was because the ground started to break on my one foot underneath, so I stepped across the hole to grab, and then it collapsed again. Luckily my engineer Tim Redd was able to finish pulling the dog out safely," he said.

Once Macy was free, she was a bit shaken.

But, after reuniting with her owner, she was in much better spirits.

"The owner got very muddy from the dog," McClellan said.