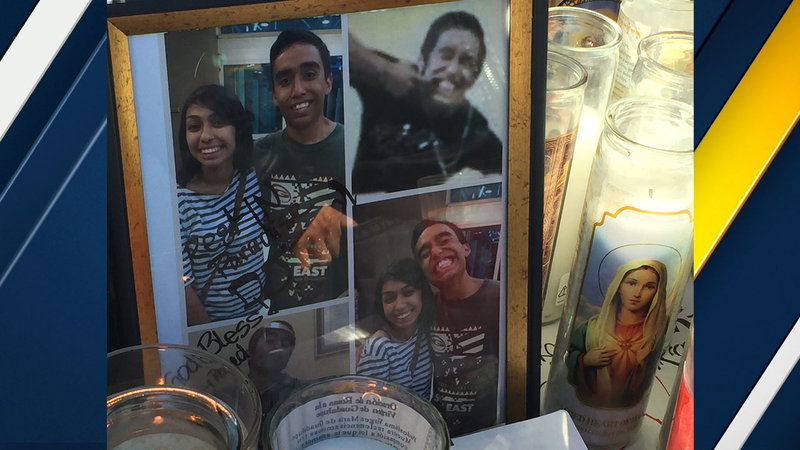 LOS ANGELES -- A community grieved a Los Angeles student who was killed in a crosswalk while walking to school.

Andres Perez was a high school senior on his way to school when he was hit and killed Tuesday morning near S. Avenue 60 and N. Figueroa Street -- five days away from his 18th birthday.

He had been accepted to film school at Cal State Los Angeles and had a bright future, but now his family is left grieving an unimaginable loss.

Detectives said Perez was in the crosswalk on his way to Los Angeles International Charter High School when he was hit by a city-owned utility truck.

Casandra Contreras was there when the boy's mother arrived and found out her son was killed.

"All you can do is hold a mother at that point," Contreras said.

At his school, several students carried in flowers Wednesday morning. It is a tight-knit community, with only 225 students, and everyone knew everyone.

Concerned citizens plan to gather for a vigil and march on Friday to demand answers from City Hall over the dangerous crosswalk where Perez was hit.

"We're asking for safe streets. I don't know how much more clear we can be than that," Highland Park resident Tina Gulotta-Miller said.

Councilman Gil Cedillo said immediate improvements for the dangerous corridor in his district are on their way. They include two new stop signs, two stop lights, two beacons and a 30 percent extended crossing time will be added to those crosswalks.

Counseling is being offered at the school to help students and friends heal.

If you would like to donate to a fundraiser for Perez's funeral, visit gofundme.com/b6f7vkkc.

As a precaution, school officials canceled classes at the charter school following a threat made to nearby Los Angeles Unified School District schools.

A statement issued by Clifford Moseley, executive director of the school read in part: "We send our deepest condolences to the student's family on their terrible loss. The safety and well-being of students are our top priority. Given our location within the boundaries of the Los Angeles Unified School District, we made the decision to follow the district's lead in closing school today as a precaution following a safety threat."

The family said Perez had not yet made it to the school to be told about the the campus shutting down, according to Det. Charles Walton of the Los Angeles Police Department.

L.A. International Charter School falls under the County Board of Education, which is not under purview of LAUSD.

The employee who struck the victim has worked for the city of L.A. for over 20 years, authorities said.