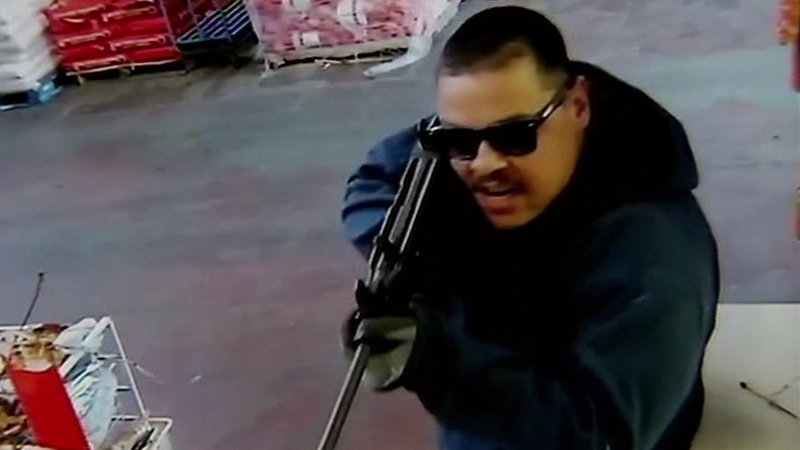 SAN JOSE, Calif. -- Police are searching for a pair of brazen robbers armed with an Uzi-type submachine gun accused of robbing a wholesale food supply store on 3rd street in San Jose.

The entire incident was caught on surveillance video.

The business is surrounded by homes and some neighbors wonder why police didn't release the dramatic video sooner in an effort to catch these suspects still on the loose.

Surveillance video shows the robbers getting out of a silver Acura. One suspect is seen armed with a long barreled Uzi-type submachine gun and the second suspect is masked.

Chaos erupts as the first suspect allegedly hits an HP Foods employee in the face. Surveillance video then shows him grabbing a fistful of cash as the woman slumps over in her seat.

In the meantime, the second suspect enters what appears to be an office area while the first suspect helps himself to whatever is in the victim's pocket. "I was kind of surprised this actually happened during daylight," neighbor Ana Perez said.

Perez has seen the video and the mother of three doesn't like that police didn't release it sooner as the robbery happened more than a month ago. "We have to be aware of what's going on especially in this community in this little city here," she said. "There's a school around this corner and there's another school down on 7th and Reed."

Surveillance video shows the suspects leaving with their hands full.

Off camera, HP Foods employees said the woman in the video is doing okay. They hope someone will recognize the two suspects and call police.