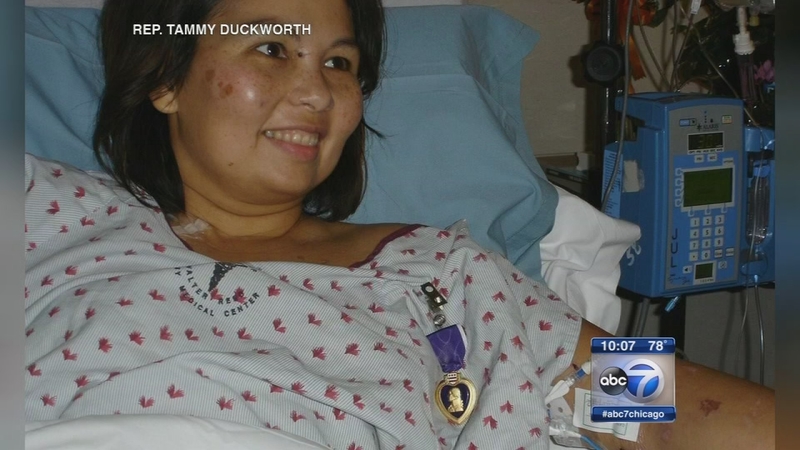 CHICAGO (WLS) -- Republican presidential nominee Donald Trump is getting more campaign flak. Following his recent controversy over his feud with the Muslim parents of a fallen U.S. serviceman, Trump was handed a Purple Heart by one of his supporters at a Tuesday rally.

"I've always wanted to get a Purple Heart. This was much easier," Trump told his supporters.

Double amputee Iraq War veteran and Democratic Illinois congresswoman Tammy Duckworth responded to his remarks, tweeting a photo of her own Purple Heart with the caption "There's nothing easy about it."

.@realdonaldtrump, this is how one usually looks when you are awarded the Purple Heart. Nothing easy about it. pic.twitter.com/K59HLnzmhK

Duckworth is running for U.S. Senate against GOP incumbent Sen. Mark Kirk who is not supporting Trump's presidential campaign.

The Iraq veteran who gave Trump the Purple Heart said he supports him.

"One hundred percent, I'm behind him. I know other veterans that are behind him. I'm just glad that I could do my little part," he said.

The Purple Heart wasn't the only headline to emerge from that rally, as Trump was interrupted by a crying baby.

"Don't worry about that baby. I love babies, I love babies!" Trump said. But one minute later, he took it back.

"Actually I was only kidding. You can get the baby out of here. That's alright. Don't worry. I think she really believed me, that I loved having a baby crying while I'm speaking. That's okay," Trump said.

President Obama also had strong words for Trump Tuesday, declaring publicly the candidate isn't fit to hold the office of the presidency and calling out Republicans.