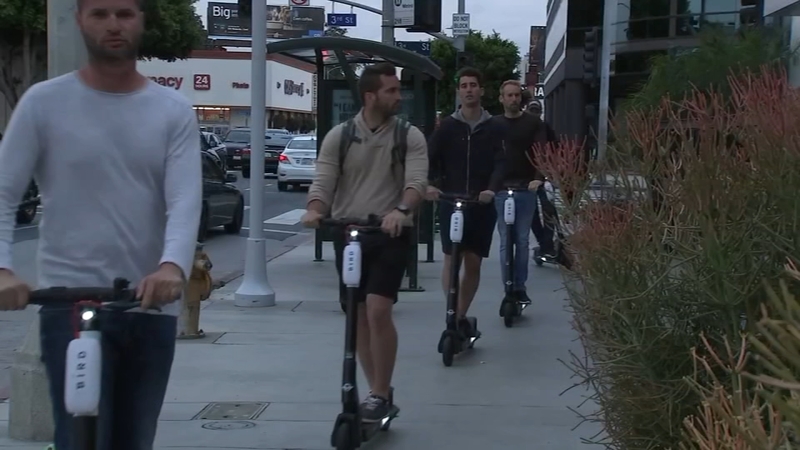 Cities across the country are embracing shared scooter programs, but the I-Team found accidents, scooter litter and sidewalk traffic jams in many cities which have the programs.

So far e-scooters are responsible for deaths in Dallas, Washington, D.C., Chula Vista, California, and Cleveland.

The first scooter study, released in January by the Journal of the America Medical Association found of 249 emergency room patients in scooter accidents, most were head injuries, fractures, and soft-tissue injuries. One problem is a lack of helmets. Only 11% of patients under 18 and just over 4% of older riders wore a helmet. Two of those patients had severe head injuries and were placed in intensive care units.

"There is always a concern," said Rosa Escareno, Commissioner of Chicago's Department of the Business Affairs and Consumer Protection (BACP). "What we have done is placed strong insurance requirements in our pilot one of the strongest in the country. In addition we believe residents have to have common sense and use safety-- rules of the road, they should know the rules of the road and that's why education campaigns are so important. We want people to use helmets. There is always a risk."

Escareno said helmets are not required but some companies will offer free helmet giveaway programs. Companies will be required to tell riders they can't use sidewalks. The city also said risks can be decreased by ending rentals at 10 p.m.

"Having a pilot, unlike other cities, allows us to take a look at what works and what doesn't so that we can build upon the performance of these companies if we choose to in the future," Escareno told Knowles.

And what about the scooter litter in other cities?

"We will hold the companies to a two hour limit, regardless of whether it's litter or whether they are beyond that half a block, beyond the area that they are supposed to operate," said Escareno. "If they don't pick it up, we will pick it up and they will be cited."

The Electric Shared Scooter Pilot Program is scheduled to launch June 15 and lasts four months. The city's northwest and southwest sides between Irving Park and Pershing roads, will be the test grounds in the city's effort to "reduce single occupancy vehicle use."

Downtown was purposely omitted because it already has so many transportation options.

Multiple companies have applied as vendors. They will provide the roughly 2,500 scooters that will be available wherever it's legal to lock a bike in public. They're limited to 15 mph.

And you cannot ride a scooter outside of that pilot test zone. According to Escareno, if you try to leave the approved area "the scooters will slow and come to a stop so they will not be permitted to go beyond that geography."

Consumer Investigator Jason Knowles has this I-Team Takeaway on scooter safety and what you need to know if you're going to ride.

Enforcement has been an issue in other cities. BACP says police won't actively enforce, but they could ticket you if you are riding on the sidewalk.

The city also said each scooter company needs to provide $5 million per incident, and claimed that amount is the strongest in the country.