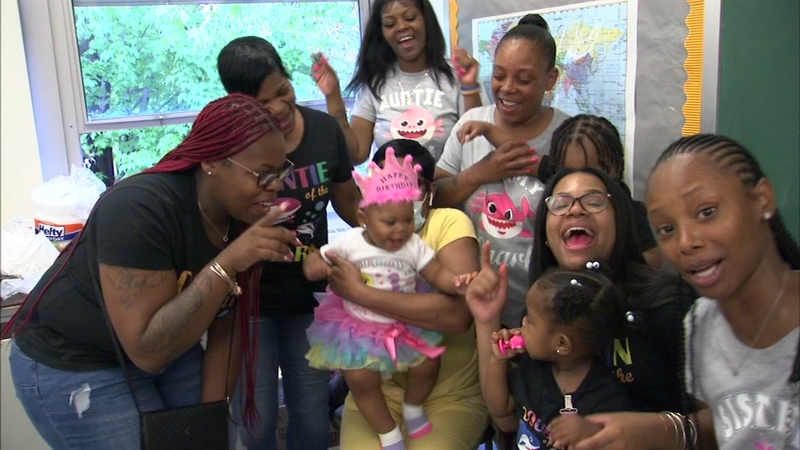 CHICAGO (WLS) -- She was shot in the head just weeks after being born in a mass shooting in the Englewood neighborhood last summer. Now, Terriana Smith is ringing in her first birthday surrounded by loved ones.

In her very short life, Smith has already endured far more than what many would go through in a lifetime.

"She's a blessing to me," said her mother, Tyeshia Banks. "It means everything to see my baby still here with me, living and doing very good."

Security footage captured the frightening moments last July when three gunmen hopped out of a Jeep and began firing in every direction near 66th and Halsted, shooting seven people.

One-month-old Terriana Smith remains hospitalized after being shot in the head during a brazen daytime attack in Englewood.

Smith was the youngest victim at only one month old at the time. She was sitting in the car with her parents when she was shot in the head. Her father was also shot.

"It was very hard for me to see all that blood and to hold my baby's head. She just was staring at me. Made me know she was alright," Banks recalled.

Lieutenant David Showers, with the Chicago Police Department, was one of the first officers on the scene.

"Going from that day of the shooting to today -- seeing her smiling, her wearing her little crown -- it just fills my heart with joy," he said.

That joy was felt while celebrating her first birthday at The Center of Englewood, just a block away from where her life was almost taken.

A life, with more milestones to come.

"It's just like the resurrection of Christ. It's a joy to see that," said Smith's great-uncle, Bishop Benard McKenzie.

"This is really a testimony and it's a story that when she gets older she can tell a lot of people," added Smith's uncle and community activist, Charles McKenzie.

Now, since the shooting, Smith's mother said she has moved out of the neighborhood for her family's own safety.

So far, no arrests have been made.