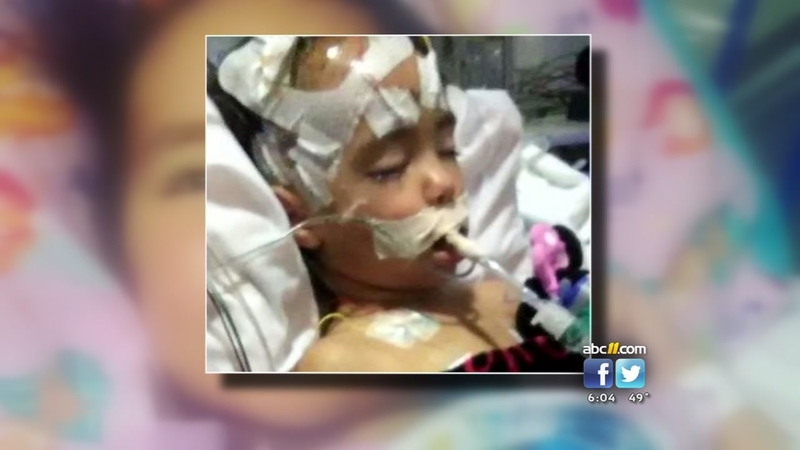 On Tuesday, Tiffany Trejo, 22, was charged with felony child abuse and is being held in the Durham County detention facility.

The 2-year-old suffered a skull fracture, brain bleed, a lacerated liver, and other serious injuries.

She remains in critical condition at Duke Hospital.

The child's father told ABC11 she is improving but cannot speak or walk on her own.

"She's moving her hands so that's a big step," said Raul Trejo. "I've always had hope even though other people told me different. I was never losing faith."

According to an arrest warrant, the injuries happened at a home off Trail of Merlin Road near Garner October 24.

Rickerson told authorities he was watching the child when she bumped her head on a dresser.

Investigators said the pair may have tried to cover up the assault.

Deputies confiscated several items from Rickerson's home including drugs, a broken hairbrush, and the couples' cellphones.

Rickerson's mother, Chastity Brown, is also charged in the case, accused of misleading investigators to hide her son's identity.

Investigators said evidence found on her adopted son's cellphone reveals other instances of Rickerson assaulting the 2-year-old and smoking methamphetamine.

Raul has picked up temporary work to help pay for his daughter's medical expenses.

He wants to eventually get her transferred to a hospital in Arkansas where he lives with his other children.

"No parent should go through what I went through. It's hard," he said.