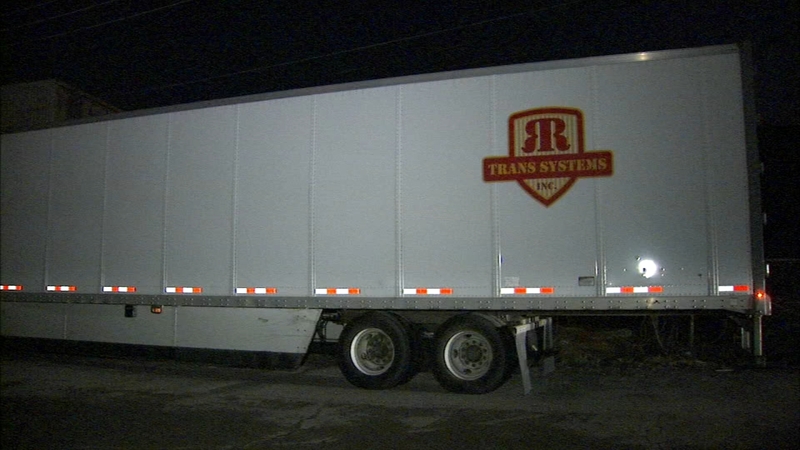 CHICAGO (WLS) -- A tractor trailer with $40,000 worth of frozen chicken was towed last week away under false pretenses, said the business owner who hired the driver.

In recent weeks, multiple incidents of vehicles being taken by a predatory towing operation have been reported in Chicago.

The operation, which may be orchestrated by gangs, monitors police scanners and intercept requests for tow trucks. When the tow truck appears unsolicited at crash scenes, they essentially take the vehicle hostage, demanding money.

Wednesday night, the tractor trailer filled with chicken struck an overpass at 49th and Western Avenue. Before the driver could place a call, he was approached by a tow truck offering to help.

Angel Camacho, 26, and Jon Twist, 30 both of Chicago, were charged in a vehicle towing scam.

"They make him believe they're going to help him make the delivery. The driver unhooks. Signs some sort of blank piece of paper," said Lydia Trusova, a business owner who hired that driver to deliver the chicken.

The delivery never took place and the trailer was nowhere to be found. Trusova reported it stolen.

Operating under the name of Ondevas Towing, the company, which, according to records, has been in business for less than a year, lists its address at 8825 S. Genoa Avenue in Chicago's Auburn Gresham neighborhood.

The property owner said Monday that there are no offices, and the company only leases the yard to park towed vehicles.

The towing is nearly identical to an incident that happened Thursday in Chicago when two men impersonating city employees by wearing vests with the city logo intercepted a call for a tow truck. The men took a tractor truck and trailer.

Trusova spent Monday afternoon at Amigo Foods, trying to make delivery of the frozen chicken-five days late. They are currently in the process of inspecting the chicken to make sure the refrigeration was not interrupted during the trailer's stay at the tow yard.

Police are still investigating the case and are reminding people that a tow truck never automatically shows up after an accident. Also, any authorized city towing services must present you with documentation of the request.

When dealing with a towing company there are several things you can to do to protect yourself from being scammed:

Should you have a problem with a tow that took place in Chicago: