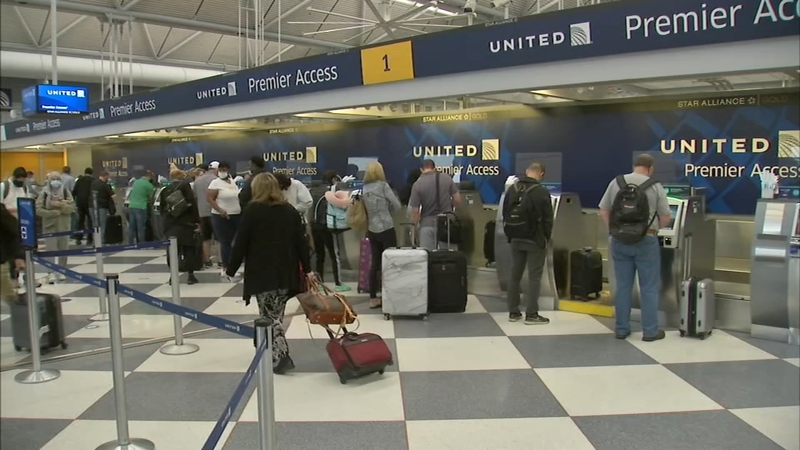 CHICAGO (WLS) -- This Memorial Day will be the first major holiday weekend since vaccinations became widely available and millions of travelers are expected to hit the roads and the skies Friday.

"I think it's wonderful," said Elana Kritikos, who arrived at O'Hare from Hawaii. "We're both vaccinated so that's why we decided to travel. I'm sure a lot of people are feeling the same way as we are."

The busiest holiday travel period since the pandemic began is underway.

"People are trying to get back to normal," said Enyloma Alilionwu, who is flying to Idaho. "People are actually trying to live life so I'm not surprised. It's been a while since people have been out and about."

More than 37 million people are expected to take a trip. That's 60 percent more than last year when 23 million traveled.

Cortnie Smith from Schaumburg...has big plans for the long weekend. She is heading to Florida with her friends.

"We're going to Tampa," Smith said. "We're gonna go to Sunset Music Festival. It's our first festival back in what a year and a half so we're excited. First girls trip so it should be fun. we're just excited to get away from the rain."

United CEO Scott Kirby says bookings are piling up with a huge demand for beach vacations or places in the mountains.

"So we're expecting 1.3 million people," Kirby said. "Will be by far the biggest travel weekend that we have had so far this year."

According to AAA, nearly 9 out of 10 people traveling for Memorial Day Weekend will do so by car, with 1.7 million in Illinois alone.

But it won't be cheap. Gas prices have not been this high since 2014. So some are finding it easier on the pocket book to fly.

Maggie Supple from Western Springs is heading to Miami for a bachelorette party, choosing to fly for the first time in two years.

"I checked into my flight this morning and it said that it was like fairly full so I kind of knew that going in but I have economy plus so I hope to be kind of away from everything," Supple said.

Meanwhile, mask mandates remain in place inside airports and on planes.

Rental cars are also at a premium and trains are full, too as Amtrak resumes a number of Chicago-connected routes this weekend.

"Usually prices go up and you can get a car if you're willing to pay. Now we have a double whammy. Prices are through the roof, but over a third of the markets we found cars weren't even available," said Prof. Joe Schwieterman, DePaul University.

As for hotels in the city, this weekend is shaping up to be the busiest in 14 months.