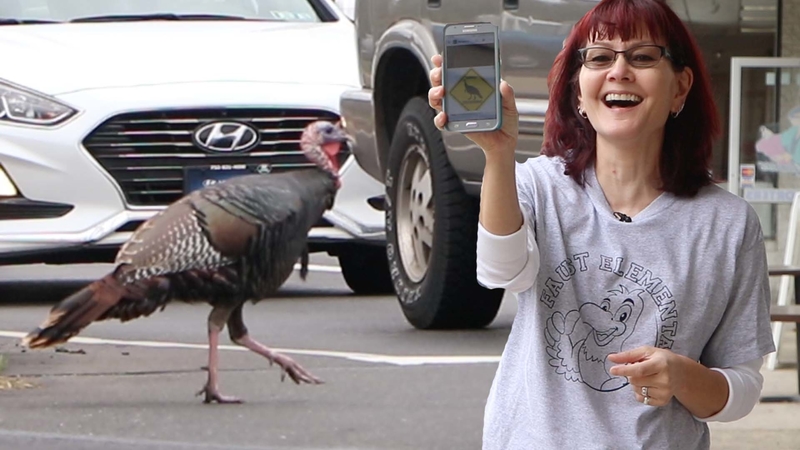 BENSALEM, Pennsylvania -- "In a place where everybody feels so divided, it's nice that something so generic can bring people together where they least expect it," said Cindy Citron.

Citron is the director of the Judy Sare Nursery School on Bristol Road in Bensalem. The busy street is known for noisy cars and trucks, but now, a wild turkey is competing for everyone's attention.

"You just want to smile and go, wait a minute, did I just see a turkey in the middle of the road? I mean that's kind of how it is," she said.

The feathered fowl has become somewhat of a celebrity in town for its brazen street-crossings and frequent visits to Wawa.

"The way social media is, it, you know, became a phenomenon quickly, and people all over the neighborhood here would stop and take pictures when they saw him," said Citron. "It was just a really happy distraction right now in the midst of lots of yucky-ness."

Soon enough, a Facebook page popped up in the bird's honor. "Bensalem's Turkey Trot" has welcomed more than 2,000 guests in the last month. It has become a place where people share their pictures of the turkey like badges of honor.

Judging by user photographs, it appears there is more than one turkey that fans its feathers for local folks. The Bensalem community has collectively identified these birds as the titular "Ben."

While some drivers are less than ecstatic to have their commutes interrupted by the wayward bird, others are happy to keep it safe.

"I was wondering why traffic slowed down a little bit and he was up here in the middle of the intersection," said Terell Thomas. "We all know him around here, so they all watch him when he's crossing the street, and what's crazy is he actually crosses the street better than some adults."

The community has decided to use the turkey's likeness as a fundraiser. A t-shirt campaign has been launched to benefit the local Lions Club. But locals hope the bird will never be used for a main course dish.

"And nobody is going to be eating Ben for Thanksgiving, I'm going to be right there," said Cindy Citron.