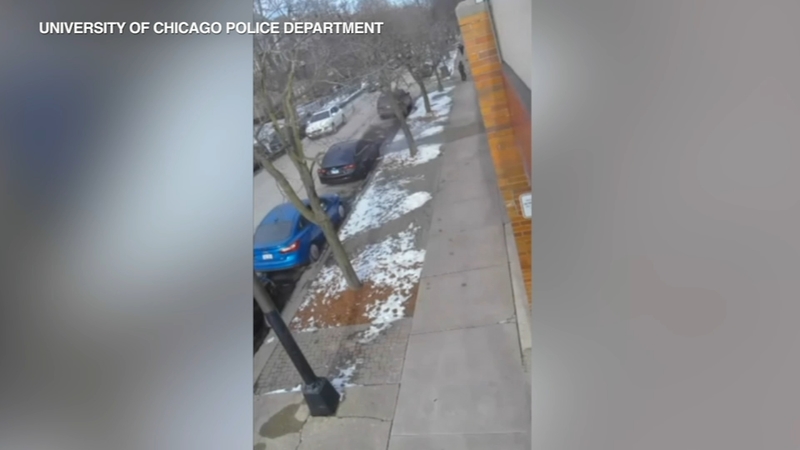 CHICAGO (WLS) -- The man critically wounded in a shootout with University of Chicago police late Tuesday morning now faces charges in the incident.

Rhysheen Wilson, 28, was charged late Wednesday with attempted murder of a police officer, aggravated discharge of a firearm and aggravated unauthorized use of a weapon.

At about 11:43 a.m. Tuesday, University of Chicago police Officer Nicolas Twardak was on patrol when he spotted a person with a handgun near the corner of 53rd Street and Woodlawn Avenue, university officials said.

The person, who police say was Wilson, began firing shots when the officer stopped his vehicle to investigate. The officer then fired back, striking the individual, Heath said.

"Officers pulled up, he shot at them and I heard he shot back," said resident John Jones. "I did see about seven casings on the ground down there."

Both the Chicago Police Department and the university are investigating the incident.

The crime scene near the university's Hyde Park campus stretched several blocks in each direction. It shut down a nearby shopping center, leaving people who live nearby confused and a little shaken by a midday shooting.

RELATED: Bodycam video shows U of C police firing across street at gunman while yelling to get on the ground

Following, UCPD protocol, the officer is being placed on mandatory administrative leave pending the outcome of the investigations.

Twardak has served with UCPD since 2016. In addition to routine patrol duties, he has had special assignments as a field training officer and bike officer, the university said.

A University of Chicago police officer shot a student in that same area in April of 2018 when prosecutors said the man lunged at the officer with a pipe.

The incident set off campus protests, but the student was later charged with aggravated assault on an officer.

University officials said Twardak was involved in one previous shooting in April 2018. The Chicago Police Department and the university reviewed the incident, and both reviews found that the officer's actions were consistent with applicable law.

Sun-Times Media contributed to this report