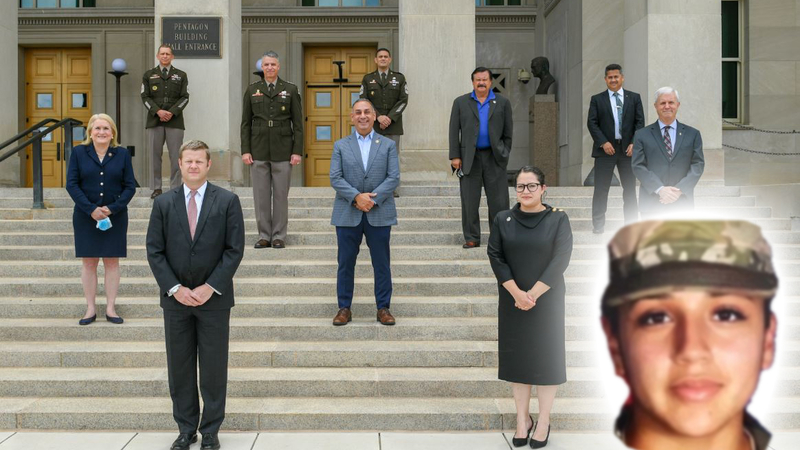 WASHINGTON -- Secretary of the Army Ryan McCarthy has agreed to appoint a panel to investigate how the case of Vanessa Guillen has been handled at a Texas military post, according to Texas Congresswoman Sylvia Garcia.

Garcia made the announcement Friday along with leaders from the League of United Latin American Citizens, or LULAC. The group met with McCarthy earlier in the day to demand the independent investigation.

"I am directing an independent & comprehensive review of the command climate and culture," McCarthy wrote. "We have to listen in order to create enduring change."

I had the opportunity to sit down with @LULAC and Congress to discuss the loss of SPC. Vanessa Guillen. I am directing an independent & comprehensive review of the command climate and culture. We have to listen in order to create enduring change. pic.twitter.com/pMuugTKgWz

Garcia and LULAC leadership said it would be presenting more cases to the Army, including those of other Latino soldiers who reported sexual harassment and victims of still unresolved homicides and abuses.

Guillen, who had been missing since April 22, was killed and dismembered by U.S. Army Specialist Aaron Robinson, a 20-year-old soldier from Calumet City, Illinois. He took his own life before he could be taken into custody, federal and military investigators have said.

Cecily Aguilar, a 22-year-old civilian from Killeen, was arrested and charged with one count of conspiring to tamper with evidence for allegedly helping hide Guillen's body.

The attorney for Guillen's family, Natalie Khawam, said she discovered at least two alleged incidents of sexual harassment -- a superior walking in on Guillen showering and another verbally assaulting her with vulgar remarks in Spanish. Khawam said she's worried about how this case might turn out. She said Guillen told loved ones she didn't want to report the sexual harassment out of fear of retaliation.
But on July 2, Fort Hood officials refuted those allegations, with Special Agent Damon Phelps, who is with the Army's Criminal Investigation Command, saying, "There is no credible information that Specialist Robinson sexually harassed Specialist Guillen."

Guillen's family has been critical of Fort Hood's handling of her case, accusing the Army of lying to them.

In an emotional sit-down interview, Vanessa Guillen's mom, Gloria, had a strong message for the Army.

Over the last couple of weeks, calls have grown for not only a Congressional investigation, but also for Latinas not to join the Army after Guillen's disappearance.

The group is making the call after the presumed death of Vanessa Guillen, claiming the Army isn't doing enough to protect Latinas who are enlisted.